While there are many foods that parents want their kids to get started on, it’s the healthy ones that first come to mind, like cucumber.

But can babies eat cucumber?

The answer to can babies eat cucumber is, as with many other foods, yes!

But, you have to wait until your child is a certain age before you can bring this veggie into your baby’s diet.

Parents normally wait until their little one is 9 months of age, but doctors and pediatricians recommend waiting until she’s 1 year old at least to let the child’s digestive system develop well enough for her to be able to process new foods.

The teething process should also have come far enough along by then to give your little one a bit of a chance with tackling cucumber, but also other vegetables such as the dreaded zucchini.

There are also a few other reasons for waiting that long, but more on that a little bit later.

What’s important to note is that cucumbers are one of the best ways to introduce solid foods to your child when she’s ready.

All good things come to those who wait so there’s no need to force cucumber on your little one.

The many health benefits of the green veggie will get to her sooner or later, as you’ll find out in this article. 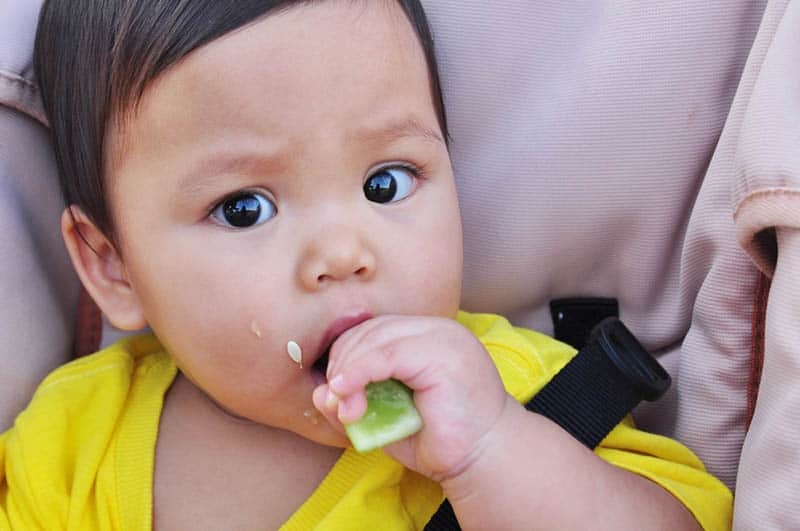 Turns out that they most certainly can, as I mentioned earlier.

Some people believe that you can introduce it as early as 6 months (or whenever your child starts enjoying solids), and others claim that waiting until the child is around 9 months of age is best, but I waited until mine reached his first birthday.

While I am a promoter of all things healthy, I figured it would be best to wait until the baby’s digestive system had developed enough to stomach most solid foods, just to be safe.

There’s also the fact that cucumbers might not be the most delectable snack for your child at first.

It’s always better to start off with foods for baby-led weaning and then expand her palate with cucumbers and the like a bit later.

But, why wait so long?

Partly, so that your kiddo’s teeth can grow in just a little bit more to cope with solids and she can slowly start dropping breast milk or formula.

​The other reason is tied to digestion.

Cucumbers contain a substance called cucurbitacin that, while seemingly a rather valuable compound for further scientific research in terms of cancer prevention, is rather bitter and hard to digest.

Often also found in gourds, squashes, pumpkins, cucumbers, and zucchinis, it’s something that, if consumed in high quantities, can lead to bouts of nausea, vomiting, diarrhea, and even hair loss.

And, as can be expected, the quantity necessary for kids to be affected is a lot less than that of adults.

This is especially true if your kid’s digestive system has not yet developed far enough to handle this compound which will ultimately just lead to needless problems like creating a cucumber aversion.

For any information about when you should start your baby on solids, you should consult with your family doctor or pediatrician as they’re the most trusted source as far as anything related to the health of your child is concerned.

If they give you the green light to proceed, only then should you try introducing cucumber into your child’s diet.

Even so, you should still give it to her either pureed or mashed up.

Avoid giving her cucumber slices or any other small pieces as those are still likely to pose a choking hazard until about age 2-3.

Your child’s first time eating solid baby food needs to be something that resembles breast milk in taste (if you’re breastfeeding) or something slightly sweet that will encourage her to continue exploring food. 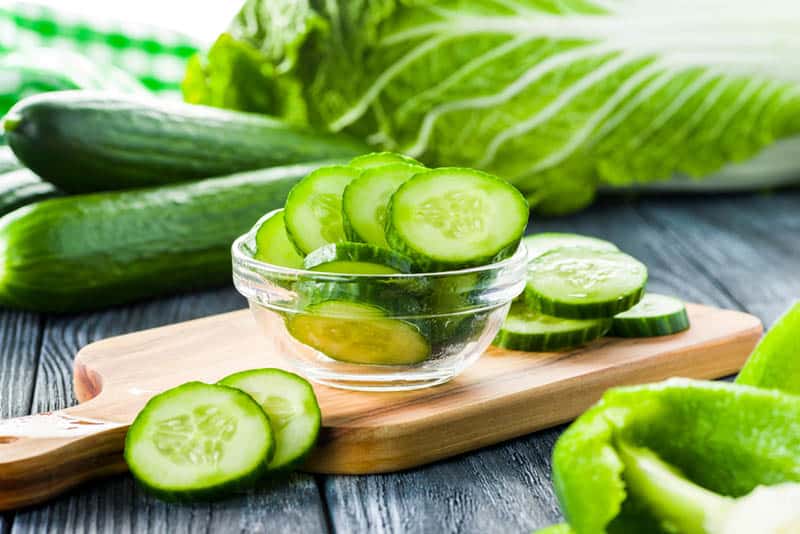 The first thing parents consider when thinking of the question: Can babies eat cucumber? is the beneficial effects of such healthy food.

Giving a baby cucumber has a lot of merit to it as, first of all, you’ll find that it’s rich in vitamins, especially vitamin C and vitamin K which are essential for a child’s growth and for a human body to function properly in general.

Vitamins, however, aren’t the only bonus as the humble cucumber contains many other minerals and nutrients, the most notable ones being folates, manganese, potassium, silica, and magnesium.

Though, while they are chock full of such goodies, they don’t exactly cover the daily nutritional values for a child.

They shouldn’t be the only thing given to your kiddos to eat as their first food, especially if they’re cooked and presented in puree or mash form with the skin taken off which usually removes a lot of the nutritive value from it.

They are, however, a great complementary element of several baby food recipes, pairing well with green beans.

Cucumber slices can make for great finger foods when your child is around 2 years of age.

The other great benefit is that cucumbers, much like watermelon, are mostly made up of water.

This, in turn, helps keep your child’s skin silky smooth as well as reduce any swelling caused by potential allergies.

How To Introduce Cucumbers To Your Baby 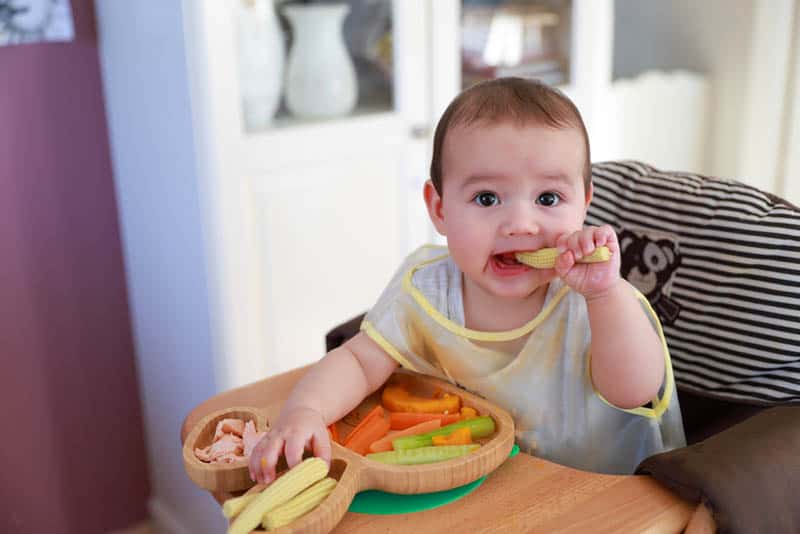 The other question that often gets asked alongside can babies eat cucumber is how to properly introduce it to your child as we all know that green veggies can be a struggle with kids sometimes.

The best way, at least for younger kids, is to first wash the cucumber to get any dust and potential pesticides off so it doesn’t contaminate the meal.

I would suggest taking the peel off for the first few meals as it can be a bit chewy for your child and pose a slight choking hazard, but really that’s just a personal preference.

Next, you’ll want to boil it for a good 15 minutes, give or take a few before pulling it out, and making sure that it’s turned mushy enough to squish it with ease.

Once you’re satisfied, chop the cucumber into several large pieces and put them in the blender.

After that, it’s up to you whether you want to go for a mash or a puree, the former being a bit chunkier than the latter.

Normally, I’d opt for the smoother option myself.

I’d also suggest testing the cucumbers out as a standalone meal at first to see if your kiddo takes to them on their own.

This is highly unlikely but no need to worry, that’s mostly due to the rather bland or bitter taste that they have.

If that ends up being the case, you can simply blend them together with a delicious fruit puree that’ll help mask the taste.

The most popular choices often tend to be apples and pears as they’re easily accessible and every child seems to like them.

Once your kid’s teeth start coming in, you can even change over to giving them thin cucumber slices as an option, but be wary that they still might pose a choking hazard, so don’t stray too far from the table when your baby is eating.

As always, make sure that you thoroughly wash the vegetable, regardless of whether or not you plan on keeping the skin.

Although, I encourage you to keep it on as it provides a nice chunk of extra nutrients.

Simply cut up a few slices and serve them to your child.

Their shape will allow your child to practice that crab-like grasp and allow her to slowly improve some of her motor skills while having a snack.

Don’t forget to taste-test the cucumber yourself beforehand to make sure it’s not too bitter and rich in cucurbitacin.

You can also make use of the high water content of the cucumber to serve as a natural remedy for teething by freezing the slices, either solo or combined with some tasty fruit puree, depending on how your child likes it.

You can put the frozen slice in a mesh feeder and give it to your baby to chew on to minimize the risk of choking.

The antioxidant-rich water content of the cucumber will help provide a soothing effect on the baby’s gums and is sure to calm her down. 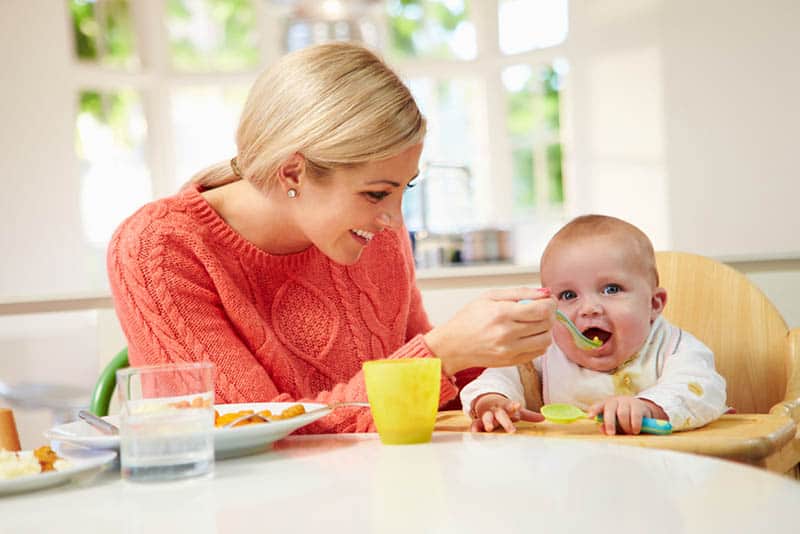 Yes! But, as with many other similar foods that start getting introduced as early solids, it’s best to take it slow.

Although the average age when your child can safely ingest cucumbers tends to be anywhere between 9-12 months of age, it should only be eaten pureed or mashed to make the transition from breast milk or formula to solids easier.

Once a few months pass, you can start introducing cucumber slices as finger foods for your baby to help serve as an interesting exercise for her even during meal times.

This will improve sensory interactions and motor skills.

If your child doesn’t like the taste of pure cucumber, you can always mix them in with a fruit puree, that you know she will like, to dull the bitterness down and make it easier for your kids to accept.

Cucumber has some amazing health benefits, plus it helps to introduce your child to new flavor options and expand her palate so she doesn’t become a picky eater when she grows older.

However, always talk to your pediatrician to get answers to any specific food-related questions, especially when it comes to introducing your baby to solids.

While I might provide some sound and well-researched advice, the fact of the matter is that nobody’s going to know your child better than you or your doctor.

They’re the ones who can directly assess the physical state of your baby and whether or not she’s ready to transition from breastfeeding or formula over to more solid foods.

READ NEXT: Can Babies Have Garlic And What Are Its Health Benefits 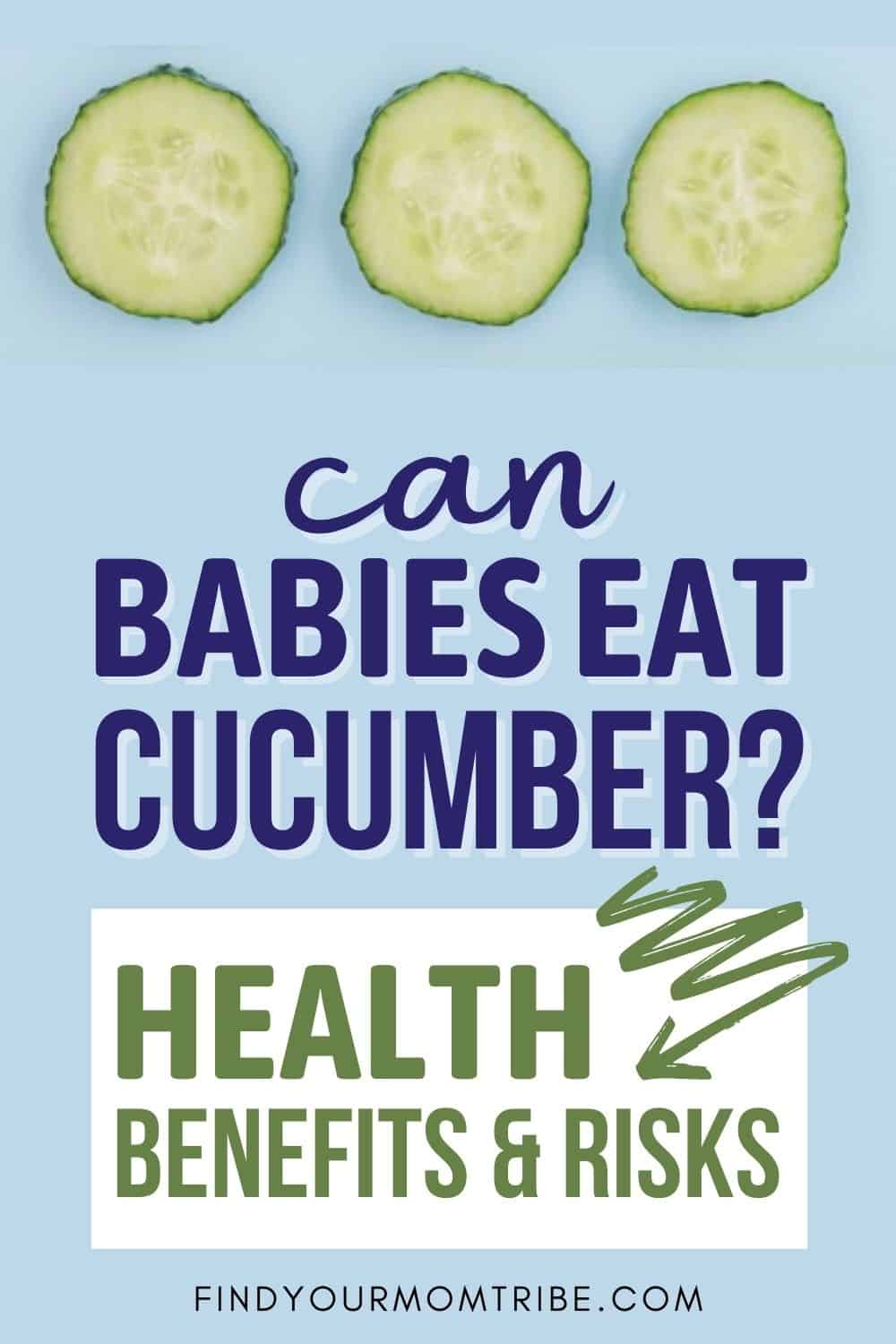