What exactly is a mother’s helper? You may find yourself overwhelmed with your newfound mothering duties when your little one first arrives as the early months of motherhood are packed full of things you’ve never dealt with before.

You realize that you need help, but your husband is working to provide for the family and a babysitter is too expensive as they are usually hired based on the assumption that both parents are working.

Enter the mother’s helper. They’re essentially babysitter lite – usually young girls or boys, mostly tweens, who want to earn some extra money by helping a mother out with household chores and the like.

They serve as a temporary reprieve for the mom so she can get a bit of rest or do something else for a while.

Being a mom can be quite taxing at times and even motherly love can’t cover that burden all the time.

Of course, these so-called mother’s helpers don’t necessarily have to be tweens who are still attending high school.
They can be older teens or full blown adults as well – it just depends on who you hire for help.

Non-adults are generally more affordable and flexible, though, due to the amount of free time that they have.

Also, you won’t be hiring them for a full day, just an hour, maybe 3 or 4 max, and the goal isn’t to use their youth to get a cheaper babysitter.

While they’ll ask for less money than adults, you should still give them fair compensation for their hard work and time.

There are some other ground rules that we’ll go over in a bit more detail below.

What Does A Mother’s Helper Do? 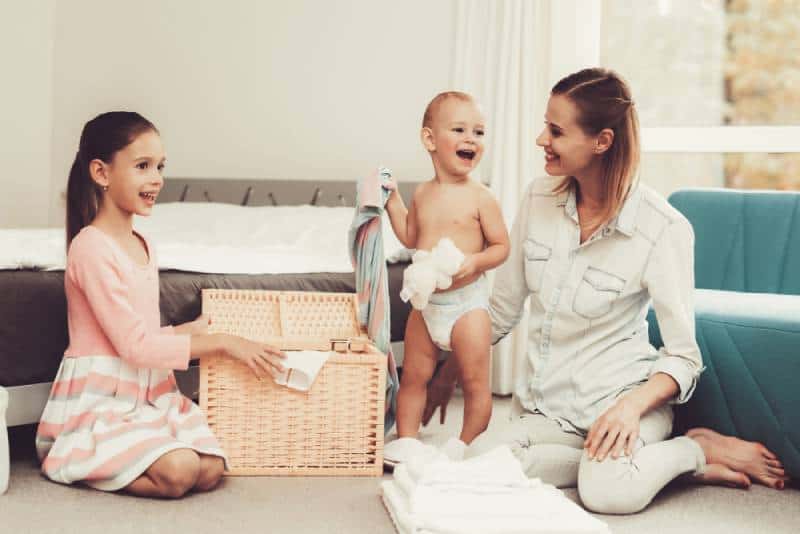 Unlike babysitters, you can’t expect them to work full time, hence why I suggested younger adults and tweens in the first place.

They have free time to spare, but they don’t want to spend it all on 8 hours of work, so a few hours a day where they get to earn what is essentially an extra allowance is great for them.

Not to mention, getting some work experience while they hone their babysitting skills as well as having better references for when/if they start babysitting.

Think of them as babysitters in training.

Their job boils down to:

Why Would I Need One? 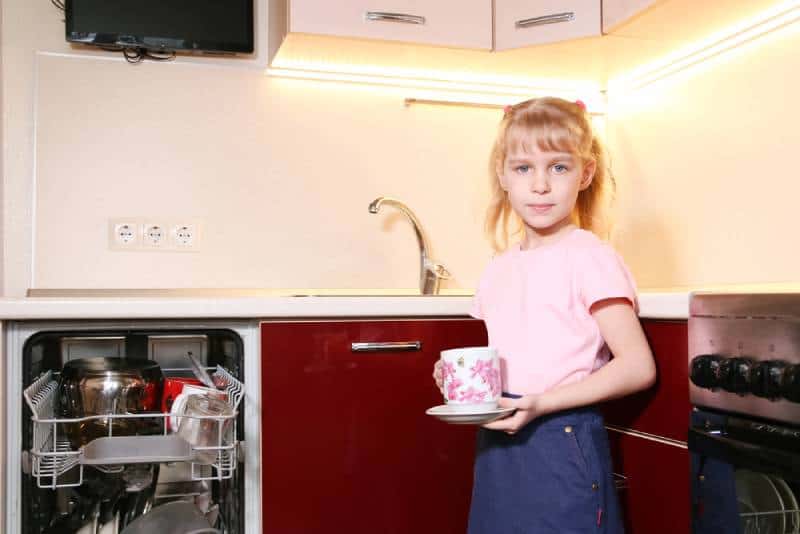 There’s a sort of level of performance that people expect every mom to be able to deliver.

While some moms can do this, some simply can’t keep up. There’s nothing shameful about that.

If it was any other duty or job, you’d have an assistant or some form of help to call upon in a situation like this, so why not here too? Motherhood doesn’t have to be a solo thing, but it can be overwhelming if you aren’t prepared.

A mother’s helper is a simple and affordable way of taking some of that burden off and helping you make time for yourself, if only part-time.

Who Qualifies As A Mother’s Helper? 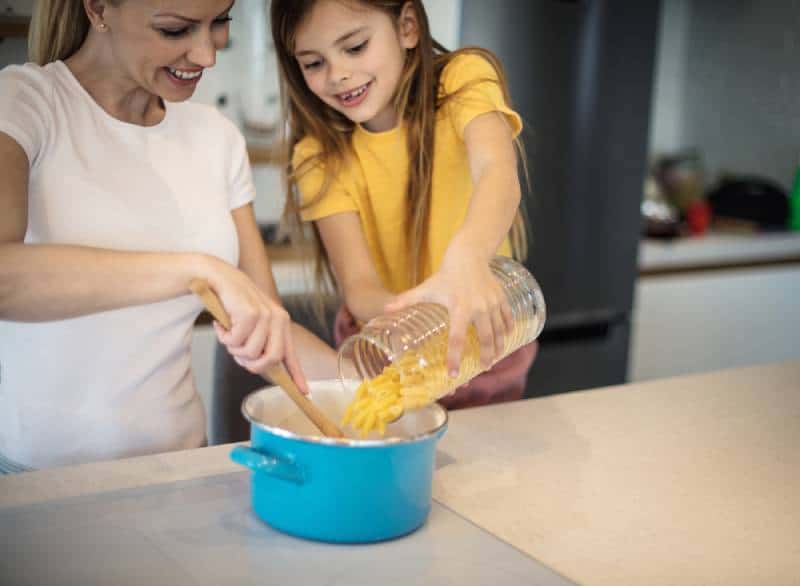 Anyone can be a mother’s helper, from tweens and teens to even adults, but the younger they are, the more agreeable they tend to be.

The older and more experienced helpers are more suited to actual babysitting rather than the duty of being a mother’s helper.
One might say they’re overqualified for the job position.

The general consensus ends up being a stereotype: young girls make for the best mother’s helpers due to a woman’s innate predisposition to be more caring and affectionate.

To be the person most expected to approach any subject matter with a decent amount of empathy.

That doesn’t mean boys can’t be excellent mother’s helpers, though. They’re just as qualified as girls and will approach the tasks from a different standpoint.

The more physical positions usually tend to suit them better, but even that’s not true for every boy.

The best way of deciding what kind of helper you want is to look at what tasks you want covered, from packing for daycare or maybe preparing some snacks, while you do the rest.

Though, in the end, it’s partly your little one’s decision, since they have to get along with them quite well.

How Do I Go About Finding One? 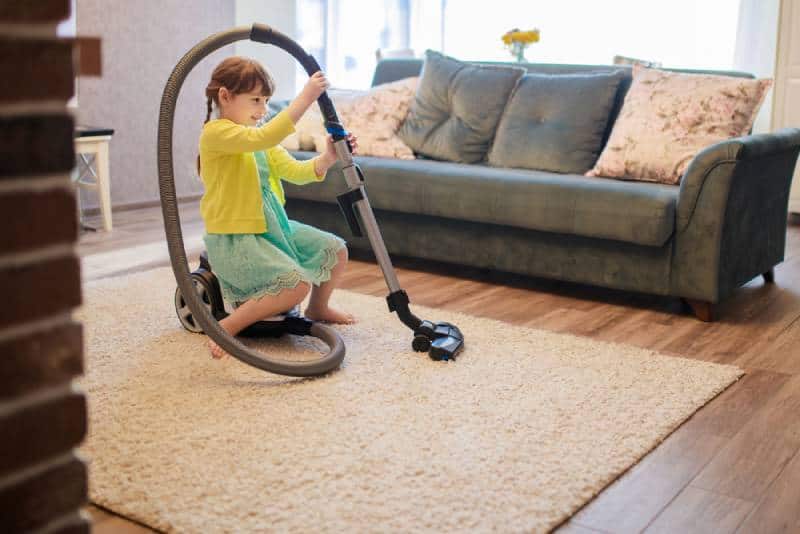 Unlike with babysitters and nannies, mother’s helpers don’t exactly have ads in the paper or nanny agencies that you can just call up to have one dispatched to you.

The best place to look is within your circle of friends and family.

Preferably someone you know who lives nearby so that their kids don’t have to trek halfway across town to get to you to do their job.

Plus it helps the kids’ parents feel more secure about allowing them to work as what is essentially a part-time nanny because they know they’re always close by.

That said, if you have some older kids that fall within the age range of 12+ year olds, then you can enlist their help too and skip all the hassle of finding a mother’s helper – for a reasonable fee, of course.

What Should I Look For In One? 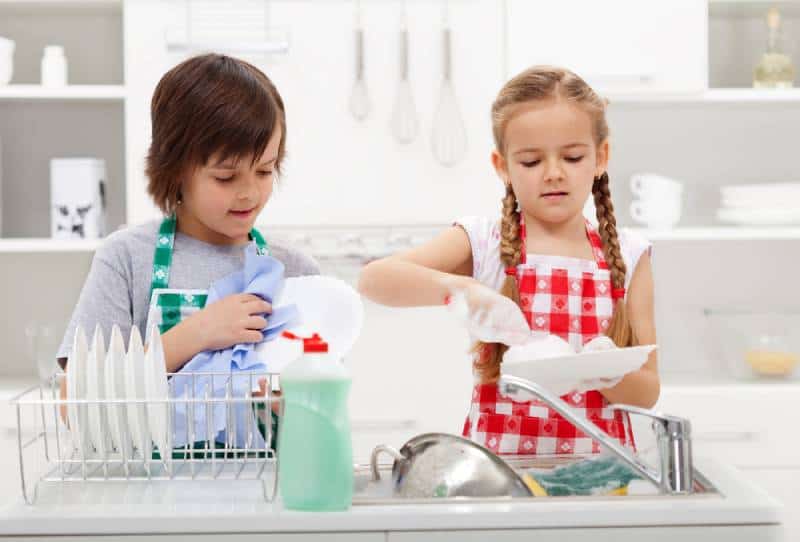 Once you start your search, this is one of the main questions that you’ll be asking yourself.

That’s because, not all kids are suited to being caretakers and some can be almost impossible to work with at times.

Again, you can’t fault them for it, they are still kids and shouldn’t be expected to know everything about taking care of others just yet. Besides, some kids just aren’t suited for this kind of work and that’s completely fine.

That said, when you’re looking for one, there are some things you should look for:

They’re kids after all, it’s not their job to be accountable. They’re slowly growing into it if anything.

But, you need to find someone who’s accountable enough to keep your baby safe and who will adhere to all the rules and instructions that you give them.

Someone eager to help: A mistake many people make is to force kids into being a mom’s helper. Some kids just don’t want to and that’s understandable.

Ask them nicely if they’re willing to do it first before taking any further steps, otherwise you’re just wasting your own time and theirs.

Someone who’s fun: You want someone who can keep your child’s attention while you do whatever it is you’re trying to get some free time for.

You’d hate to have to return back to your child because they started crying the moment you left them.

If they can’t keep your child entertained, it’ll feel like you’ve just thrown your money away. It’s not the person’s fault, it just happens.

Someone who meshes well with your little one: The person in question can be the most qualified tween on the planet as far as their ‘resume’ goes, but if your child simply doesn’t like them, then there’s nothing you can do about it. It’s just the way it is with our kids.

They have a certain set of preferences that’s different from our own and we have to adhere to those when looking for childcare providers of any kind.

We have to compromise and meet them in the middle.

Bonus – They know first aid: While you can’t expect every child to know how to deliver first aid, some kids might have been members of scouting troupes or have had first aid taught to them.

It’s a question that it doesn’t hurt to ask and if you happen to stumble upon a potential mother’s helper who has experience administering first aid, I’d say that that would bump them up the list significantly.

What Do I Do Once I’ve Found One That Fits Me? 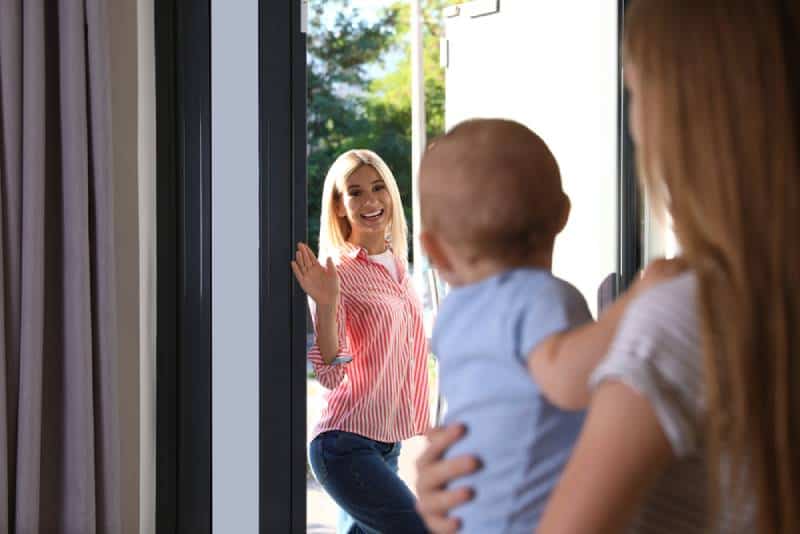 You have to demonstrate the duties they’ll have in the best possible light if you are to catch your potential helper’s attention, because they have just as much of a right to say no to this as you do.

Be clear about the job description: Always have a clear and laid out plan of exactly what you expect your helper to do around the house and when.

Make sure they know what your child can and can’t eat, if they have any allergies and such like.

It’s best if you stick this information on a post-it note or write it down somewhere easily accessible so they can have a reminder.

Discuss the terms with them so that it works for both of your schedules – you shouldn’t have many problems regarding that if they are a tween or a teenager.

Be flexible regarding the rules: Again, it’s very likely that your helper will be a teenager or somewhere around that age.

Remember that their level of responsibility isn’t that high, so if they do slightly mess up here and there, don’t scold them or anything.

If anything, you should check with them to see if there’s a problem with the schedule.

Maybe they got in over their heads at the start and some of their responsibilities might need a bit of toning down.

Be fair to them and put yourself in their shoes.

Would you like to be treated like that? I, at least, think that it would leave a sour taste in your mouth.

Treat them like adults in these matters and ask if they have a set price of their own. If not, work out a reasonable payment plan.

A good guideline if they don’t have their own price list is to just ask what their weekly allowance is and use that as a starting point.

The bare minimum should at least be minimum wage, which is about 7.25$/hour. That should make things fair if they don’t have their own set prices.

But, do sit down with them and tell them that they need to start valuing their skills, otherwise someone else might come and take advantage of their services.

Help them establish the value of their help for any future mother’s helper or babysitting endeavors that they might have.

A mother’s helper can be a smart addition to the home of any stay-at-home mom when things start getting hairy and you can’t catch up on all of your work.

They’re young people who have the energy to keep up with your tireless kids when you would otherwise get tuckered out.

They’re the older brother/sister that’ll keep them busy and happy while you go to get groceries or do some chores around the house.

Act like an employer, but not one that’s too strict.

Don’t put too much of a burden on them and make sure that they’re paid adequately. They’re kids trying to earn some extra money so they can have fun or get something that they’ve always wanted.

Treat them the way you’d like to be treated and make sure you explain the rules to them properly.

Be clear and concise, but have some leeway in case they don’t manage it all the first few times. Be flexible.

They’re there to help make your life easier so you can consider your well-being a bit more while the well-being of your kids is being taken care of by them.

Oh, and don’t forget to leave your contact information with them in case something pops up while you’re out running an errand.

I hope these tips encourage you to consider taking a mother’s helper to help you tend to the things you may have put off because of having kids – and to help a teen have a better time out with their friends. Until next time, mammas. 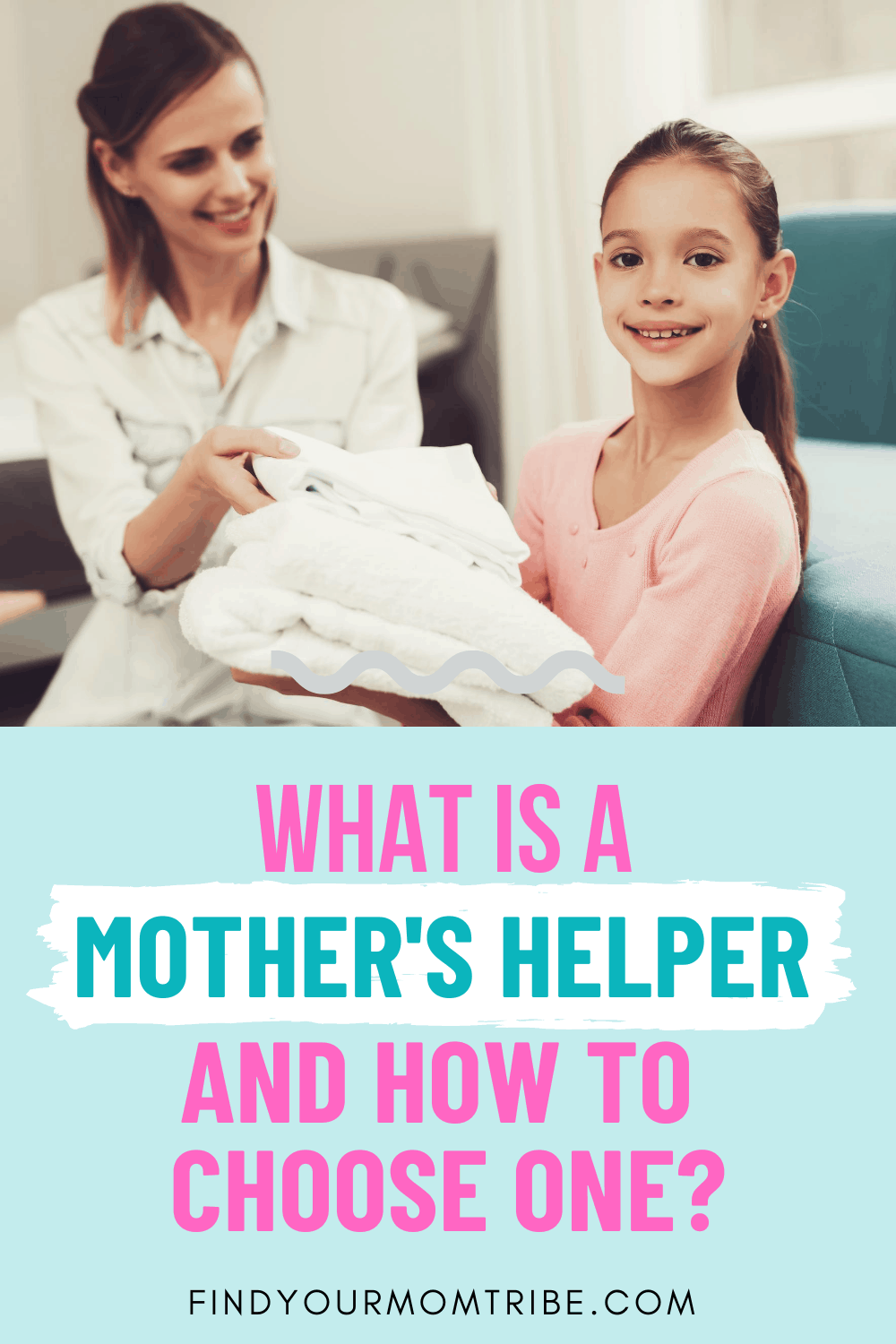