A lot of parents tend to be a bit startled when they first see their baby rolling around from back to belly, fearing the baby might hurt themselves.

But it’s really no more of a cause for concern than any other developmental milestone in your child’s life.

So when do babies start rolling over?

Well, this period usually occurs around the baby’s third month, when their muscles are strong enough for them to start their first steps toward walking. This is seen in the act of rolling over.

Despite some babies being able to do this in their very first days of life, this new skill is temporarily lost for some reason within the first month, only to return around month 3 or 4 when they have enough strength to do so independently.

Why Is It A Good Thing? 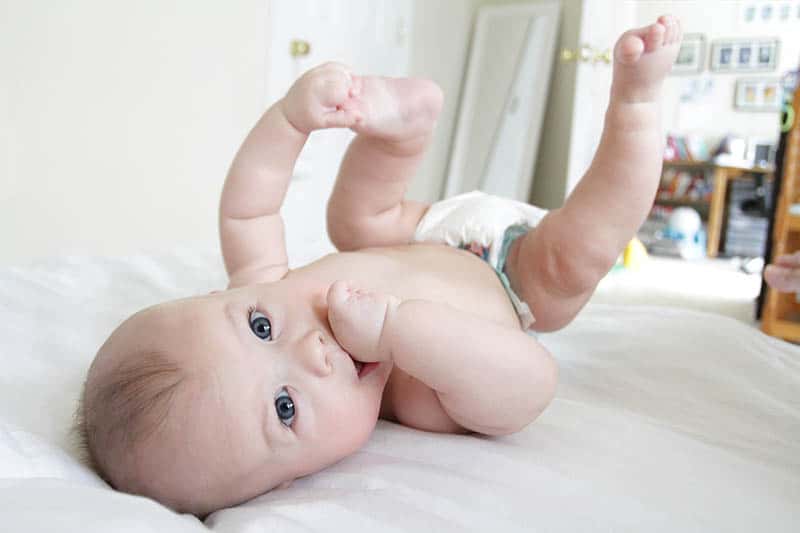 There are two reasons.

I’ve already mentioned the first one, which is the fact that your child’s development is clearly progressing at a healthy pace given that rolling over is the first step toward proper walking and is the prerequisite of crawling.

Crawling will be the next step in your little one’s physical development and won’t be too far off once they’ve mastered rolling over.

It’s a sign that their motor skills are slowly starting to develop thanks to the strengthening of their back muscles, neck muscles, and arm muscles, all of which are responsible for this type of movement being possible in the first place.

The second reason is that when the baby finally gets the hang of rolling over, the risk of sudden infant death syndrome (SIDS) is greatly diminished, if not eliminated altogether since your little one’s body will know how to roll over if it finds itself in an uncomfortable or dangerous position.

Is There Anything Bad About This? 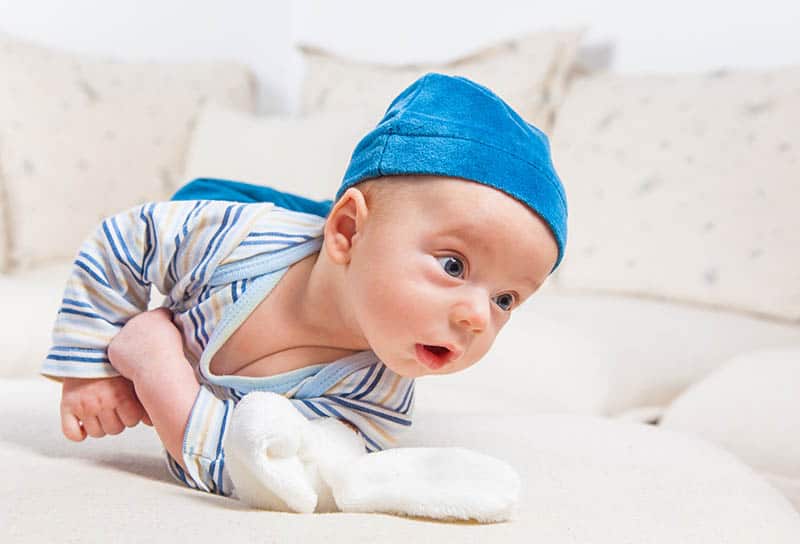 Well, kind of, though nothing too major. And no, don’t worry, your baby will not break their neck by doing rolls.

The only major downside of them learning how to roll over is that diaper changes might turn into a bit of an annoyance as your baby will no longer want to lay still. It will be fun for them though!

You should make sure you have guardrails wherever you put them down, or at least have someone around them at any given point in time.

The changing table comes to mind because if the person tending to the baby’s diaper change doesn’t pay attention to them rolling around, they might fall and hurt themselves.

The same goes for their crib, but cribs should already have rails on them so that’s less of a problem unless you have one with removable sides for easier access to the baby – in which case you should always make sure to lift them back up before leaving.

What Should I Do When I See My Baby Roll Over For The First Time? 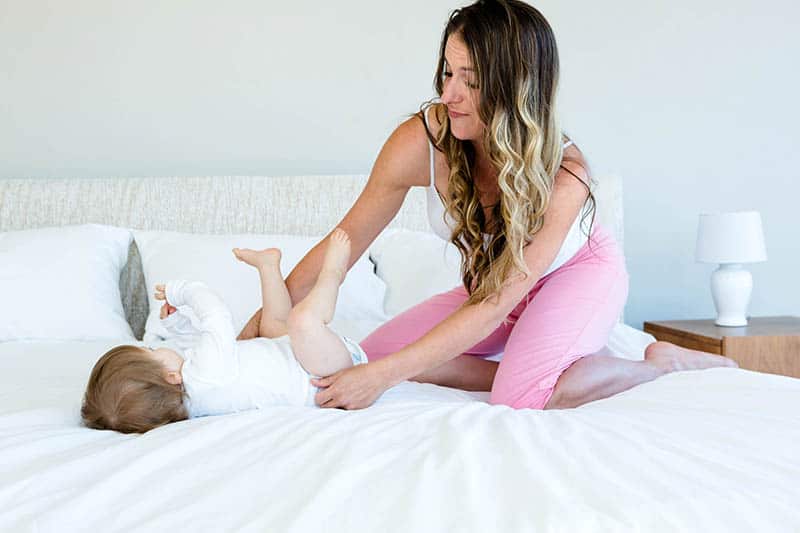 As I said earlier, there’s no cause for alarm. If anything, it should be encouraged and further nurtured.

Help your child train this new reflex of theirs and turn it into an autonomous thing. Think of it as teaching them how to walk, except the little baby version.

When they get to 3 months of age and start demonstrating this newfound skill – another one of their baby milestones – of performing their first roll, you should start exercising with them by using tummy time.

Normally you can do this by putting the baby on your lap stomach first and helping them lift their limbs upward.

It’s basically a form of a mini push-up for your little one and will help them develop and train the roll-over muscles so they can perform their new favorite motion more often and with a lot more success.

It’s something a lot of people recommend starting when the baby is only a few weeks of age, though it isn’t a necessity if you fear that it might be too strenuous for them.

In any case, if you find the time, you should lead by example.

Babies are very impressionable at this stage and they’ll want to copy anything that you do.

Show them the proper technique and they’ll love doing these little tummy time push-ups, strengthening their upper body and letting them master the art of rolling over a lot more quickly than they would on their own.

Try doing it on something soft – get a nice play mat for them to lie on during these mommy and baby exercises and start them off small.

A few minutes a day should do it.

You can increase the duration of these exercises as the baby grows, and when they start further motor development, for example the transition to crawling – it’ll do them a lot of good if their muscles have been properly tended to.

Just strengthening the muscles won’t be enough, though, as they need to be shown the technique that goes along with it.

Show them the first steps to rolling around through your demonstrations.

Start by doing rolls from side-to-side and once the baby masters it, you can start showing them how to roll even further, all the way to laying on their backs.

The vice versa is a bit more difficult for them as they’ll need to learn how to put leverage under them (hand under a side) to go back to their original position,  but they’ll get there with a bit of practice.

These exercises aren’t just good for the baby’s gross motor skill development, they’re an excellent way to help you get some exercise in as well, and doing it alongside your little one should bring a lot of extra motivation for keeping yourself in shape too.

And don’t worry if your child doesn’t seem to get it at first or if it takes them a few weeks more than the expected age at which babies normally pick up on this.

Each baby has their own unique developmental cycle. They’ll reach their own internal due date soon.

My baby waited until month 5 before starting to take interest in rolling over to his sides.

He was a real mama’s boy, but he took to crawling and walking really quickly after that and managed his first steps on his first birthday.

Don’t forget to celebrate it and praise them for it, a baby rolling over is just as momentous of an occasion as the baby’s first steps – a sign that the baby development stages are coming along slowly but surely.

How To Progress After 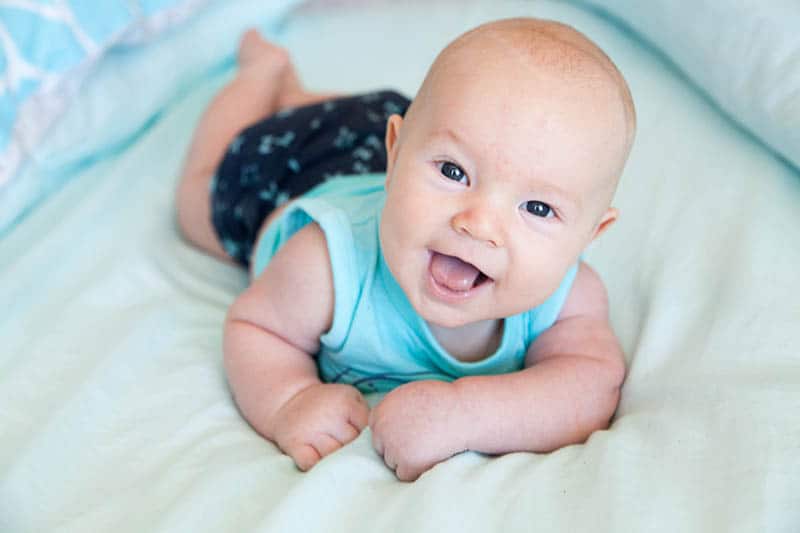 That’s all there really is to it as far as rolling over is concerned.

It may seem like a simple skill, but it’s a crucial foundation required for the steps that come along afterwards.

Soon enough you’ll see your child slowly beginning to sit up on their own as the baby learns further muscle control and gets a better understanding of the capabilities of their squishy little body.

Soon enough they’ll no longer be satisfied with just observing from the side or playing with toys in one place.

They’ll start becoming interested in more mobile toys and asking for less and less help from you or your partner to get to places, simply going there on their own as the sitting transitions into crawling.

You’ll hear less crying and fussing over such trivial matters and will start having a more peaceful time around the house as your little one becomes a little more autonomous with their gross motor skills developing at a staggering rate in the following months.

All of this culminates at around the end of year one when they get more confident and start trying to walk.

The occasional fall will happen and they won’t be alone in trying to learn this as you’ll be around to help them as well as the various walkers they’ll interact with, but more on that at a later date.

This entire developmental process wouldn’t be possible without that initial step of them learning how to roll over though and the more they practice it, the likelier the chances of them getting to these other stages sooner is. 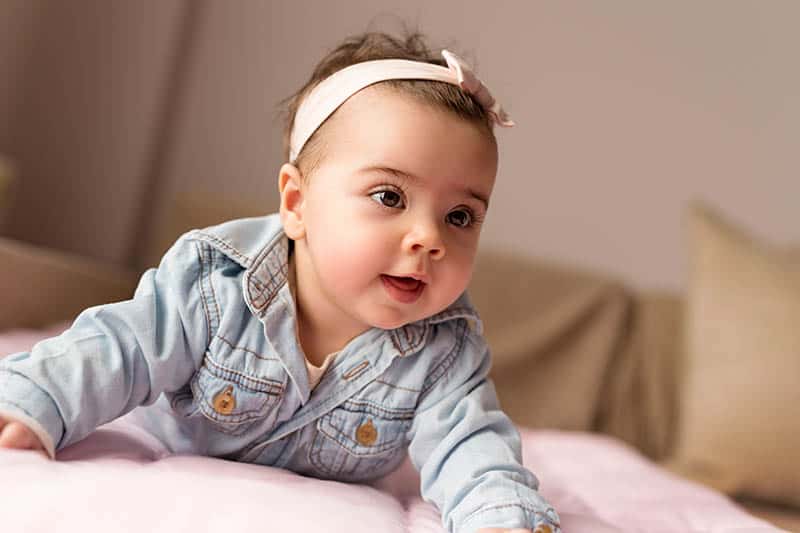 With all of that said, hopefully I’ve answered your questions about when do babies start rolling over and how to handle it.

There’s really not much to it and all it takes is a bit of effort on your and your partners part to help your baby learn proper muscle and head control – the rest of it will come naturally to them.

If you’re still having trouble getting your baby to do tummy time exercises or don’t trust yourself to do something that you feel is strenuous to the baby, ask for advice from your local pediatrician or physical therapist on how best to approach this training.

It’s better to be safe than sorry after all, but there should really be no need for it.

In any case, that will about do it this time around, mamas.

If you were trying to find out when babies start to roll over I hope I’ve managed to clear up yet another tidbit for all of you.

Hopefully,  you won’t need to worry about significant events like these with your own kids, be they current or future ones. Until next time! 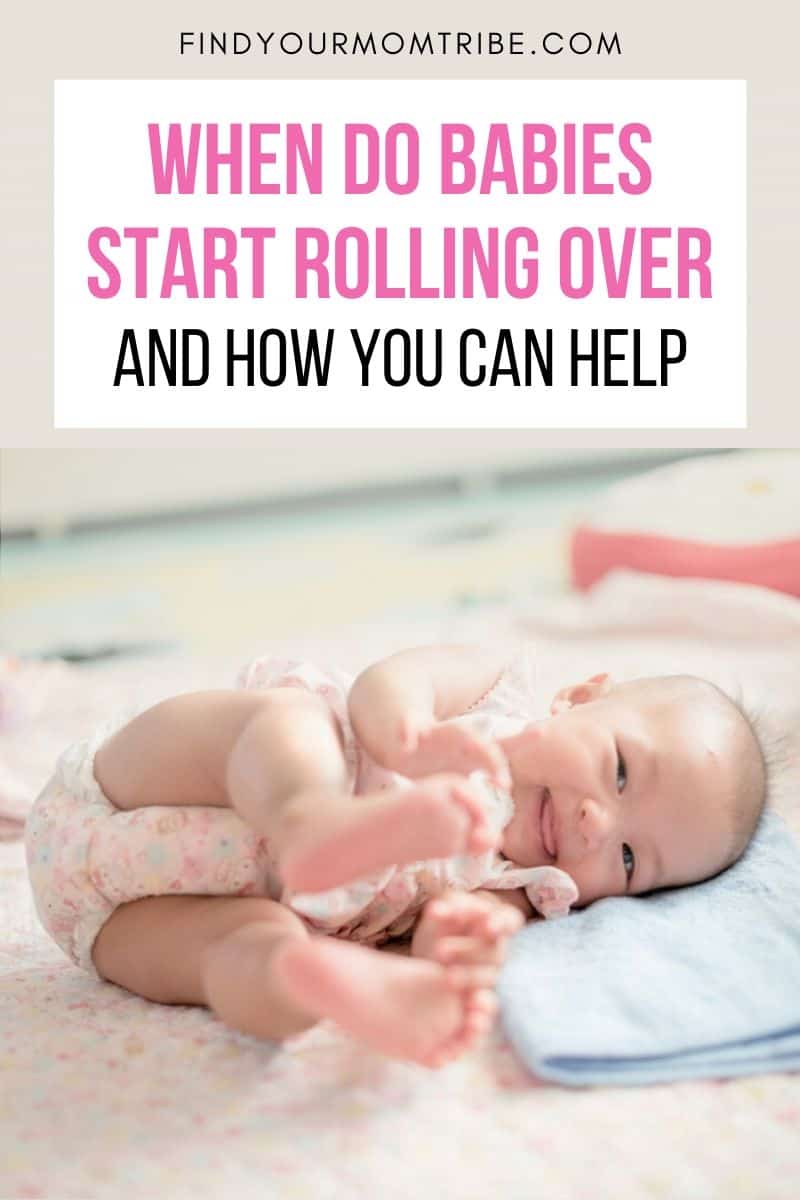