As a new parent, figuring out what babies can and cannot eat can be quite daunting, and one of the questions you might end up asking yourself is: can babies have maple syrup?​

If you’ve been wondering: can babies have maple syrup? The answer is a resounding yes, but only after a certain amount of time has passed.

It’s not exactly safe from the get-go, as your child shouldn’t be ingesting anything solid, let alone anything sugary, for the first 4-6 months outside of baby formula and breast milk.

That’s the best-case scenario, however, for my babies I chose to wait until their 1st birthdays to introduce sugary products in their diet alongside other solid foods, and even that was in moderation.

This is because your little one’s digestive system hasn’t developed enough to handle more complex foods yet, and needs some time to do so.

Infant botulism was also a big concern, which is an illness caused by a bacteria known as clostridium botulinum and can be really dangerous for children.

With all that said, let’s go into a bit more detail about why waiting that long is recommended, and what benefits eating maple syrup has.

Can Babies Have Maple Syrup? 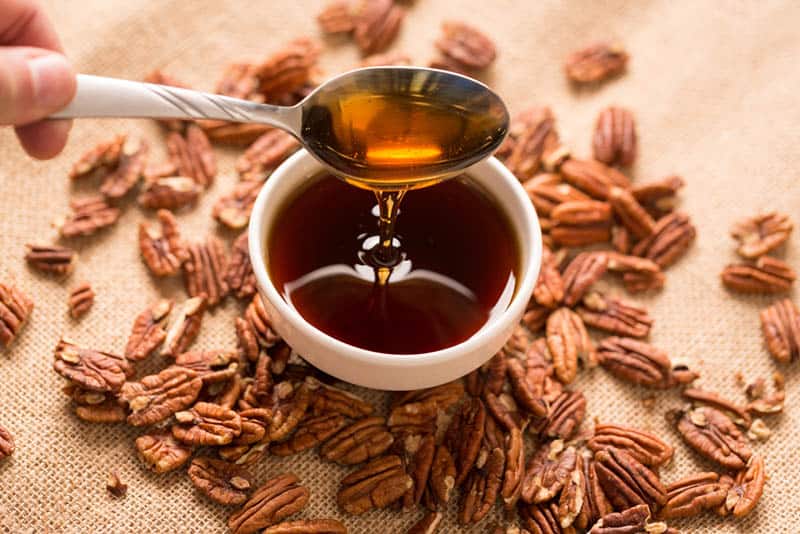 As previously mentioned, the answer to: can babies have maple syrup? is yes, but not when they’re very young.

While the main reason is to prevent infant botulism, the actual risk of it coming from maple syrup isn’t nearly as great as it is when a baby eats honey or Honey Nut Cheerios for example.

That’s because real maple syrup is boiled before being sold, which kills almost all of the clostridium botulinum bacteria, making it a lot safer for child consumption.

However, the real problem is that it’s a complex food, something young children lack the tools for breaking down in their gut.

This ability doesn’t develop until kids reach around 4 months of age, or 6 at the most, which is when you can slowly start adding solid foods to your child’s diet.

That being said, I’d personally still recommend starting off really small and focus on cutting foods for baby-led weaning that aren’t pure maple syrup, but something simpler.

The reason is because a child’s eating habits can be heavily influenced in his early age, and by the time he’s 1 year old, some of that is going to be cemented into his natural palate.

As maple syrup is sugary, it might ruin your chances of getting him used to healthier foods.

Start him off with things like mashed or puree fruits, veggies, and baby food to get the healthy stuff into his diet first.

The final reason is the fact that the risk of botulism is still prevalent in 6-month-old kids, but it drops down massively once they reach their 1st birthday as the organs have developed enough to take on a larger variety of foods.

That said, even if you think your child is safe to swap over from baby grub to solids, don’t make that decision without asking your pediatrician first.

Schedule an appointment with them so they can give your little one a check-up and confirm whether or not his body is ready to start with solid foods.

This is purely because some kids tend to develop at a later date than others, and the 4-6 month timeframe isn’t a guarantee, neither is the 12 month one.

That’s why these decisions should only be made by a health care professional.

After all, maple syrup is still rather sweet and can lead to a rise in blood sugar and other problems like child obesity.

Once your child is in the clear for solids, you shouldn’t present them alone, but instead add them to something like pancakes, and treat it as pancake syrup first and foremost, though you should be sure to cut the pancakes up into small bits first, so your kid can eat it like a finger food.

Don’t drench them in syrup either. I suggest dabbing only a little bit on each individual piece or using a dropper if the syrup isn’t too thick.

Going for the standard recipe isn’t the best idea either, as they can be rather heavy on the stomach, even for adults.

Instead, find ones that are made with either whole wheat flour or oats, your child will be able to stomach these much easier.

Believe me when I say he won’t miss artificial sweeteners in his diet if he hasn’t had any before, so it’s best to avoid them as long as you can.

If pancakes seem a bit too filling, you can use waffles or French toast as alternatives, but it might be worth trying to find a healthier recipe for both of them too.

What Is Infant Botulism? 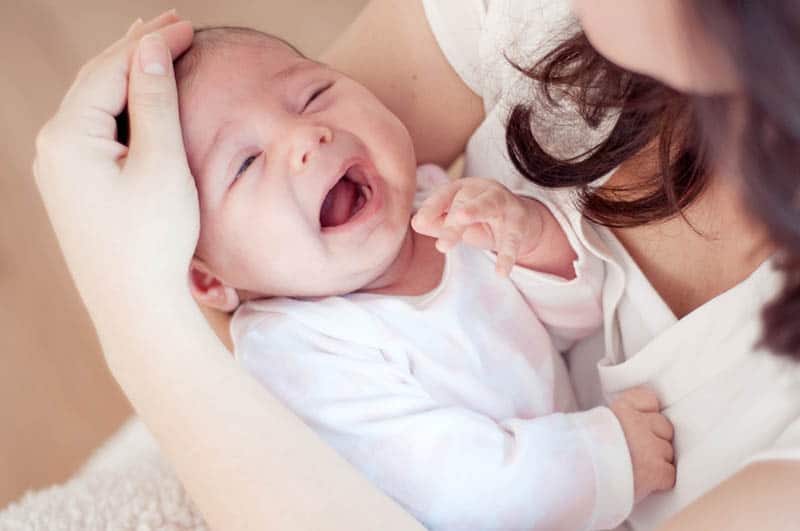 An illness I touched upon at the beginning, whose effects can leave your child in distress if ignored, is infant botulism.

It’s caused by the toxins released by clostridium botulinum, a bacteria often found in dust particles and soil that tends to attach itself to all sorts of food items, especially the maple sap from which maple syrup is formed, and honey.

While more developed digestive systems can deal with it easily, rendering it harmless to adults and older kids, it causes a lot of problems for newborns and kids who are younger than 12 months of age.

The most prominent symptoms that the illness causes are:

• Muscle weakness in extremities and the neck

• The child not moving much

It’s a rather severe issue that warrants a visit to the ICU for treatment.

While any traces of the illness can be adequately cured once the poison has run its course, it’s still not going to be a pleasant experience for the child and should be avoided when possible.

That’s why I urge you to wait until your child’s first birthday passes to start giving him solids and stick to breastfeeding in the meantime.

Sure, the risks of infant botulism fall off at month 6, but it’s virtually nonexistent after 12 months.

Also, while honey might be the main culprit because maple sap is boiled before being refined into syrup, eliminating most of the bacteria, the risk still exists and shouldn’t be taken. 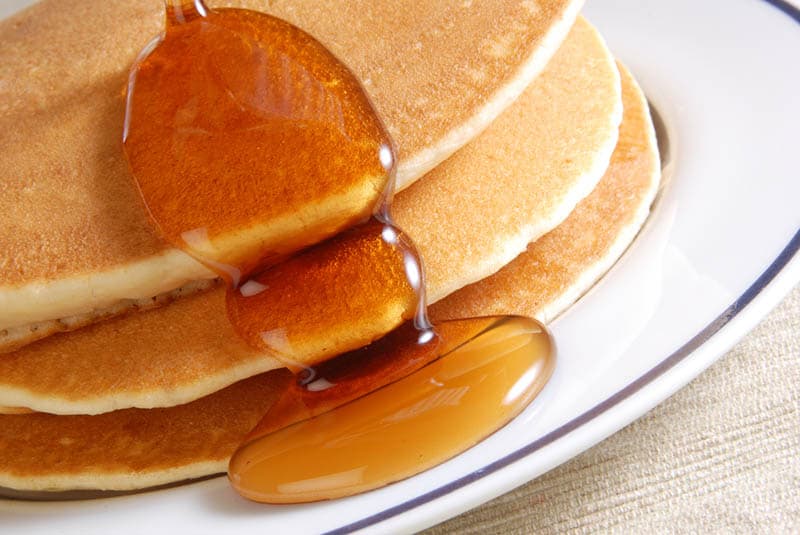 While it may come as a surprise, this delicacy derived from maple sap actually has nutritional benefits when taken in moderation.

Its main benefit is that it’s rich in antioxidants.

That’s not all, though, as it also contains a good amount of manganese, iron, calcium, zinc, and potassium, making it a grade A replacement for any common sugars in your child’s diet.

That being said, while the health benefits are plentiful, it’s still a sugary treat, so you should be careful about how much of it you put into meals.

Is It The Same As High Fructose Corn Syrup? 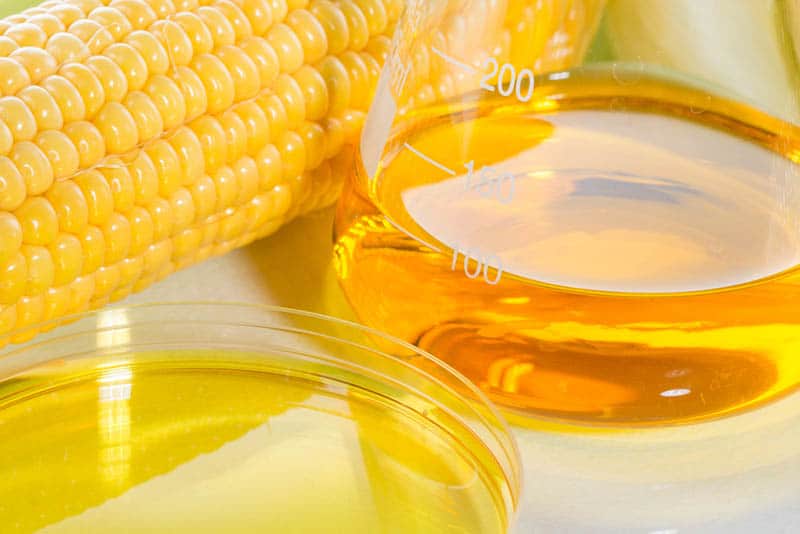 While we may be accustomed to high fructose corn syrup, maple syrup is quite different, and a lot more hazardous to our health, than maple syrup.

That’s because the regular syrup is mostly composed of artificial flavors, sweeteners, and other chemicals, while pure maple syrup contains natural sugars and is extracted from maple tree sap before being refined into the good stuff.

The only real reason someone would choose the former is the price difference.

High fructose corn syrup is a lot cheaper because of the artificial ingredients, while the latter is more expensive due to the refinement process involved in its production.

However, the health benefits far outweigh the higher price and, if you can afford it, I recommend choosing it over corn syrup every single time.

Are There Any Other Health Benefits? 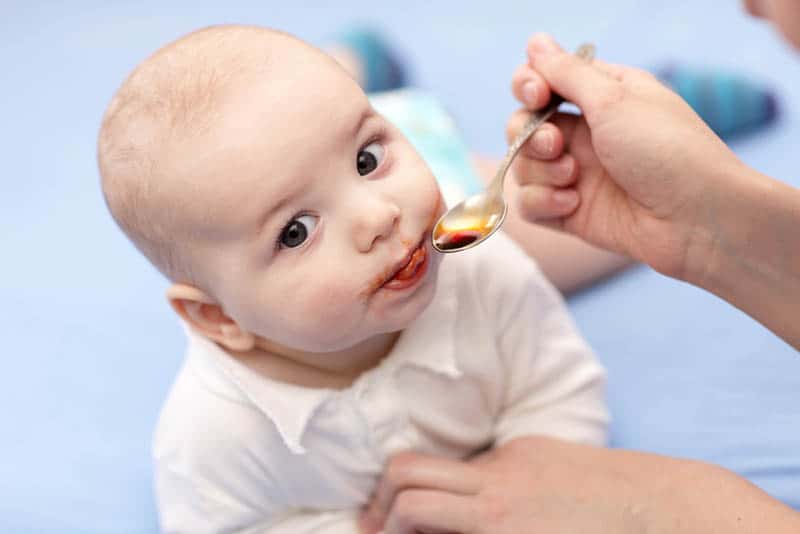 While it’s already astonishing that something with this much sugar can have any health benefits, there’s another reason maple syrup is good for babies and even adults, and that’s to help alleviate constipation.

Adults take it in its pure form to help get their digestive system moving again.

For babies, however, you’ll want to dilute it with a bit of water first, as pure maple syrup might be a bit too much for them.

That said, this should only be utilized as temporary relief for the odd case of constipation.

Should your child suffer from constipation persistently, it’s much better to schedule an appointment with your pediatrician and get him checked out. 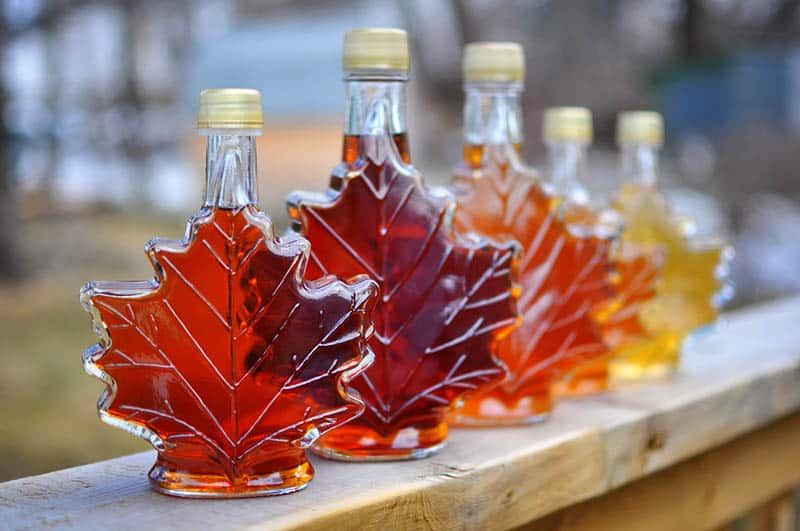 There are several types of rich maple tree goodness available nowadays, like golden amber and dark, however, they don’t really impact the health benefits all too much and are mostly defined by their aesthetic and flavor differences.

The darker versions are a lot stronger, which might make your little one dislike them.

These are mostly used for baking cakes and other sweets for that very reason.

On the other hand, the amber and gold variants have a much milder flavor which your child might enjoy more than the former, you can get him to try the darker one once he gets a little older.

In any case, getting some isn’t too hard as there are plenty of options for purchase in either local stores or on Amazon, so you’re likely to find a quality one that’s also quite affordable rather easily.

Researching the answer to the question: can babies have maple syrup? was quite entertaining, especially when it turned out the answer was yes, but that it was best to wait for between 4 months to a full year.

Basically, you need your child’s digestive system to develop enough so it can take on more complex foods and solids before introducing him to new foods.

Not to mention that young babies should stick exclusively to either breastfeeding or baby formula until they’re old enough to start transitioning to solids.

Don’t forget to consult your child’s pediatrician about exactly when he’ll be ready to come off breast milk and baby formula, as that isn’t a decision you should be making.

It’s worth noting that maple syrup isn’t the best food to start with either.

Stick to fruits, veggies, and baby food to begin with, and help build a healthy palate for him from the off.

Make sure to mash and puree them, though, so your little connoisseur doesn’t have to chew too much.

And finally, as good as it might be, only give it to your toddler in moderation, because there is a reason why people say: You can have too much of a good thing! 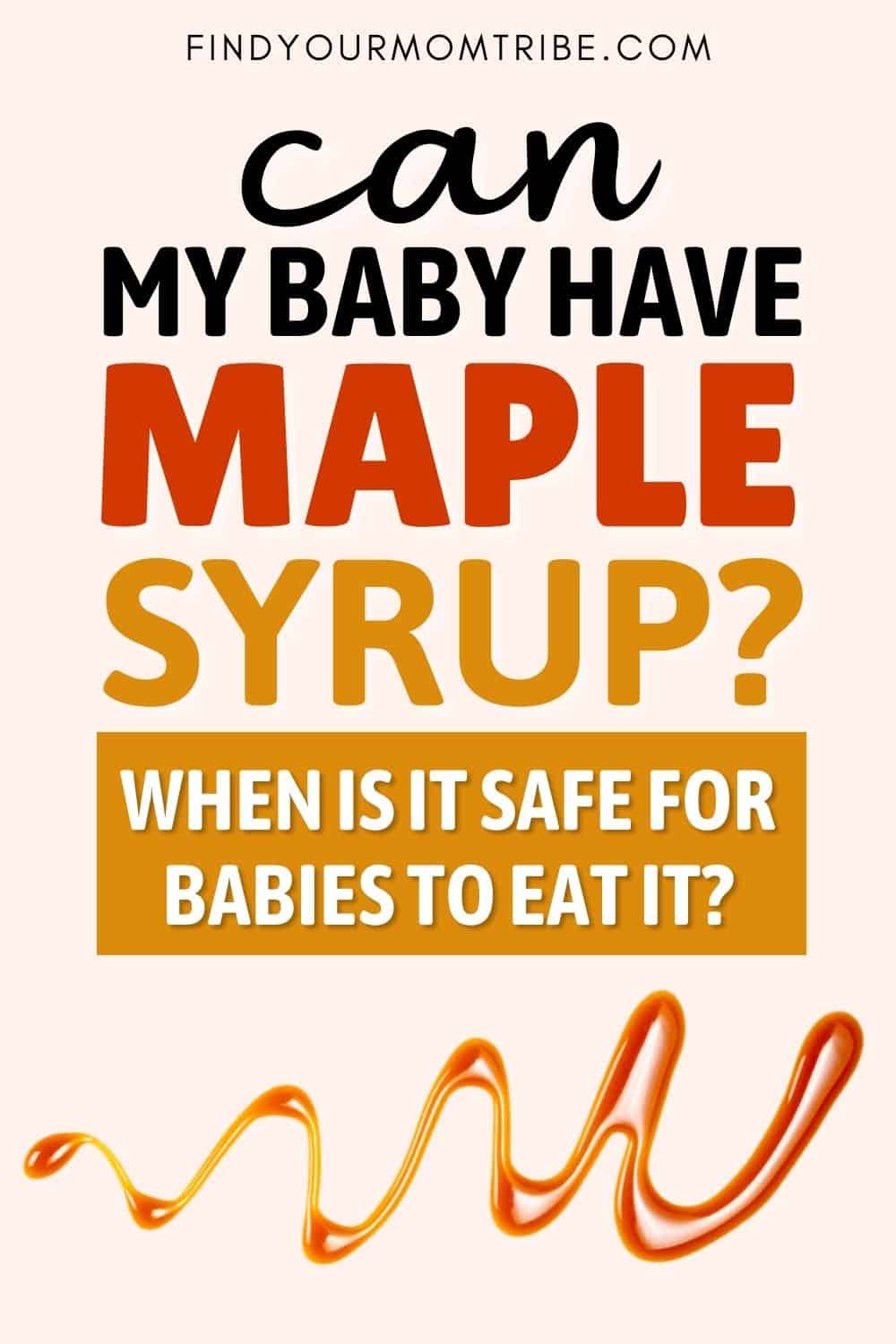