With over 400 animated and family films produced under its banner, there’s a multitude of Disney quotes that can apply to just about any aspect of our lives – and they relate to both kids and grown ups!

You don’t need to be a child or go to Disneyland to see the magic all around you, hope for your own happy ever after, and have the little things inspire you to greater heights.

Here’s the ultimate collection of great Walt Disney quotes – everything from inspirational quotes and song lyrics to downright hilarious one-liners – said by a host of Disney movie characters, and even the genius Walt himself (whose imagination must have truly been a wonderful place to live in!)

Disney Quotes About Love And Relationships

“I’d rather die tomorrow than live a hundred years without knowing you.” – John Smith, Pocahontas

“To spend a life of endless bliss, just find who you love through true love’s kiss.” Giselle, Enchanted 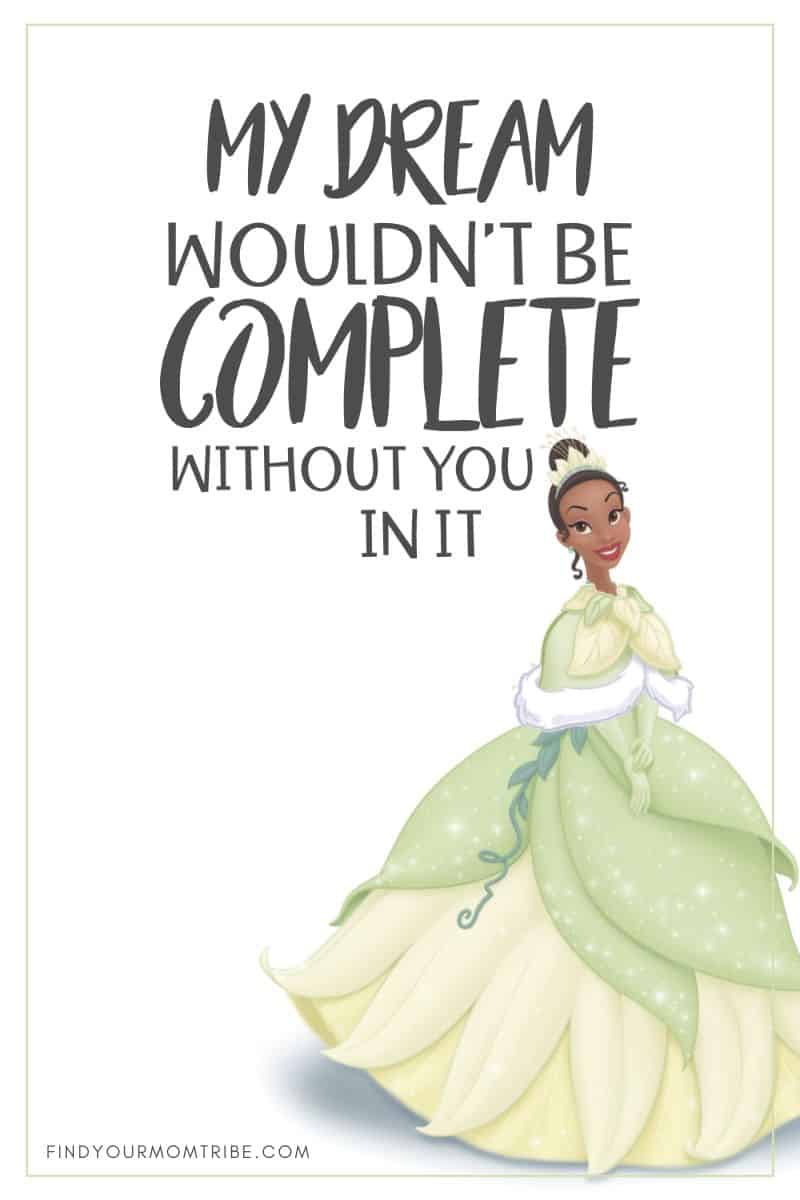 “My dream wouldn’t be complete without you in it.” – Tiana, The Princess and the Frog

“You are my greatest adventure.” – Mr. Incredible, The Incredibles

“I know what the big question is: did Rapunzel and I ever get married? Well I’m pleased to tell you that after years and years of asking and asking and asking… I finally said yes.” “Eugene…” “Alright, I asked her.” – Flynn/Eugene and Rapunzel, Tangled

“I want to do something for her… but what?” “Well, there’s the usual things: flowers, chocolates, promises you don’t intend to keep…” – Beast and Cogsworth, Beauty and the Beast

“Love is putting someone else’s needs before yours.” – Olaf, Frozen

“How do you spell love?” “You don’t spell love. You feel it.” – Piglet and Pooh, Winnie the Pooh

“You tell me where my suit is, woman! We are talking about the greater good!” “Greater good? I am your wife! I’m the greatest good you are ever gonna get!” – Frozone and Honey, The Incredibles​

“Whaddya say I get someone else to watch the sheep tonight?” – Bo Peep, Toy Story

“One look at your smile and I could see the light shining everywhere. People like you don’t come out of thin air.” – Jasmine, Aladdin and the King of Thieves

“Listen with your heart: you will understand.” – Pocahontas, Pocahontas

“All at once everything looks different, now that I see you.” – Rapunzel, Tangled

“You’re the best thing I never knew I needed… I must admit you were not a part of my book, but now if you open it up and take a look, you’re the beginning and the end of every chapter.” – Never Knew I Needed (song), The Princess and The Frog

“For it is plain as anyone can see. We’re simply meant to be.” – Jack and Sally, The Nightmare Before Christmas​​​​

“So this is love, so this is what makes life divine.” – So This Is Love (song), Cinderella

“I never expected that you could have a broken heart and love with it too, so much that it does not seem broken at all.” – Peter Pan, Peter Pan

“In the garden of memory, in the palace of dreams… that is where you and I shall meet.” – Mad Hatter, Alice Through the Looking Glass

Disney Quotes About Friendship And Family

“You and I are a team. Nothing is more important than our friendship.” – Mike Sullivan, Monsters Inc.

“I wouldn’t trade it for anything. No. Never. Your friendship is the best present ever.” – Tigger, Winnie the Pooh

“I knew when I met you an adventure was going to happen.” – Pooh, Winnie The Pooh

“Every minute spent in your company becomes the new best moment of my life.” – Rhino, Bolt

“When you’re the best of friends having so much fun together, you’re not even aware you’re such a funny pair.” – Best Of Friends (song), The Fox and the Hound

“We didn’t even realize we were making memories. We just knew we were having fun.” – Pooh, Winnie The Pooh 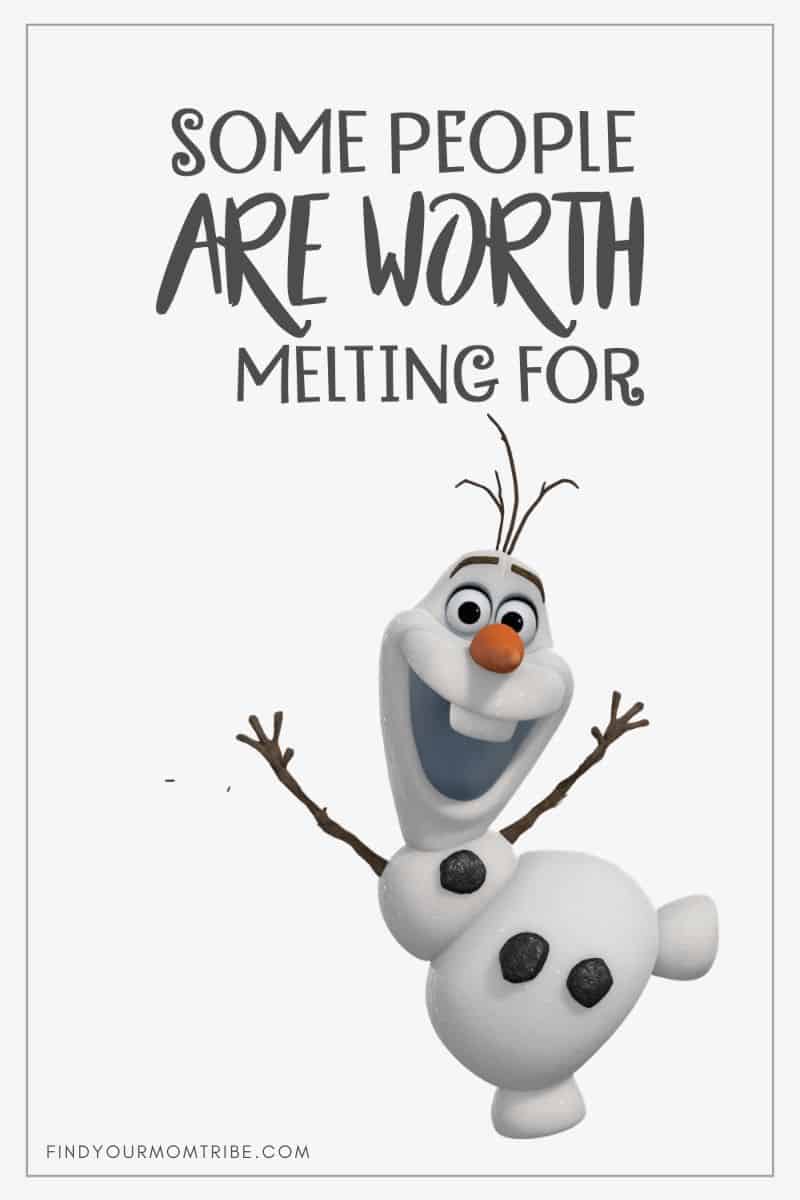 “Some people are worth melting for.” – Olaf, Frozen

“Good friends will help you until you’re unstuck.” – Pooh, Winnie the Pooh

“I don’t want you to think of me as your new dad. After all, we’re fraternity brothers first.” “This is so weird.” “Just think of me as your big brother that’s marrying your mother. Wait, hold on, we’re brothers who share the same mom slash wife.” – Don and Squishy, Monsters University​

“If there ever comes a day when we can’t be together, keep me in your heart. I’ll stay there forever.” – Pooh, Winnie the Pooh

​​​​“A man should never neglect his family for business.” – Walt Disney

RELATED: 205 Childhood Friends Quotes To Share With Your Old Pals

“Aw, poor guy. I understand. It’s not easy being banished. Take my buddy Bigfoot. When he was banished, he fashioned an enormous diaper out of poison ivy. Wore it on his head like a tiara. Called himself ‘King Itchy.’” – Yeti, Monsters, Inc.

“Motto? Nothing, what’s a motto with you?” – Timon, The Lion King

“Look at that, Abu! It’s not every day you see a horse with two rear ends.” – Aladdin, Aladdin

“Buzz! We’re your friends!” “Spare me your lies, temptress! Your emperor’s defeated, and I’m immune to your bewitching good looks.” – Jessie and Buzz Lightyear, Toy Story 3

“I don’t usually leave the asylum in the middle of the night, but he said you’d make it worth my while.” – Monsieur D’Arque, Beauty And The Beast

“My bark is worse than my bite.” – Grandmother Willow, Pocahontas

“What do you want me to do, dress in drag and do the hula?” – Timon, The Lion King

“I still think what I thunk before.” – Merryweather, Sleeping Beauty

“‘Fear’ is a four-letter word, ladies! You wanna go peepee in your big-boy slacks, keep it to yourself!” – Sergeant Calhoun, Wreck-It Ralph 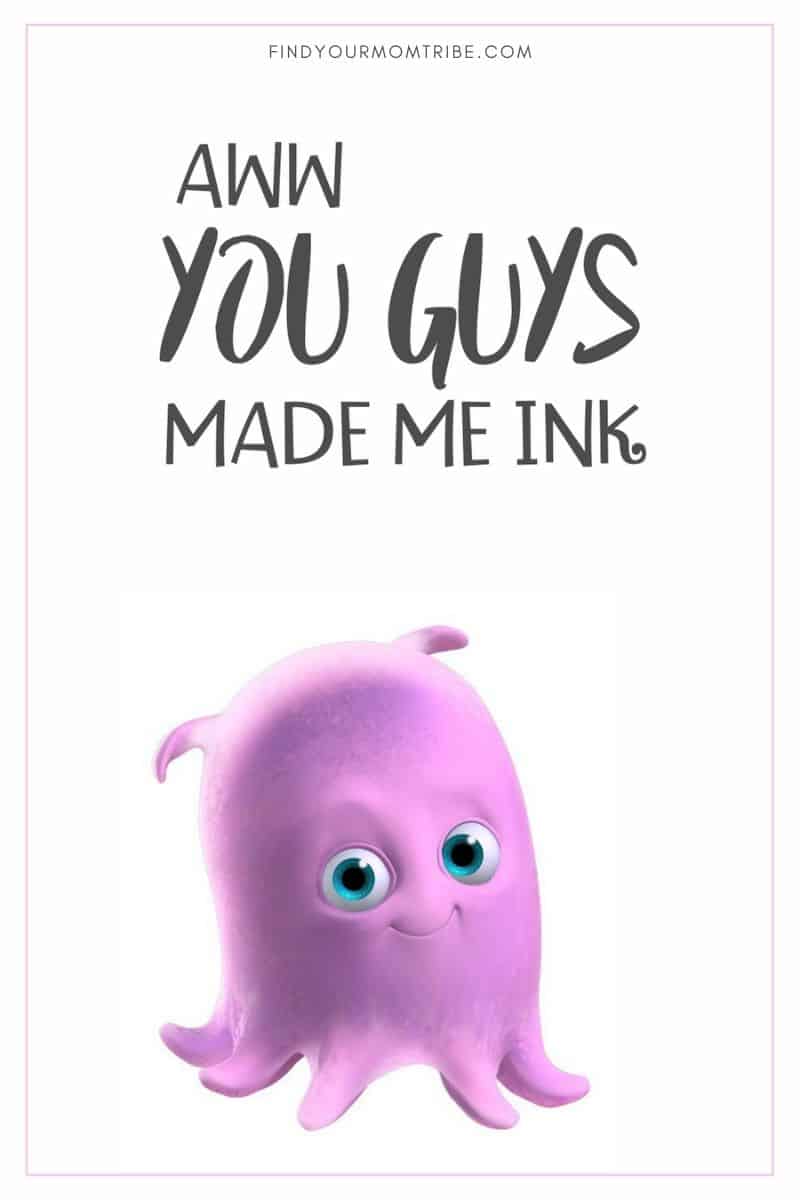 “One can get too familiar with vegetables, you know!” – Skinner, Ratatouille

“I thought the Earth wasn’t supposed to move until the honeymoon.” – Genie, Aladdin

“You’re all way past the beauty sleep thing, trust me.” – Mushu, Mulan

“Did they give you a name along with all those rippling pectorals?” – Megara, Hercules

“When life gets you down, what do you gotta do? Just keep swimming.” – Dory, Finding Nemo

“The way to get started is to quit talking and begin doing.” – Walt Disney

“You must not let anyone define your limits because of where you come from. Your only limit is your soul.” – Gusteau, Ratatouille

“I am a nice shark, not a mindless eating machine. If I am to change this image, I must first change myself. Fish are friends, not food.” – Bruce, Finding Nemo

“Oh yes, the past can hurt. But, the way I see it, you can either run from it… or learn from it.” – Rafiki, The Lion King

“Remember you’re the one who can fill the world with sunshine.” – Snow White, Snow White and the Seven Dwarfs​

“Now, think of the happiest things. It’s the same as having wings.” – Peter Pan, Peter Pan

“Life is a journey to be experienced, not a problem to be solved.” – Pooh, Winnie the Pooh

“Today is a good day to try.” –  Quasimodo, The Hunchback of Notre Dame 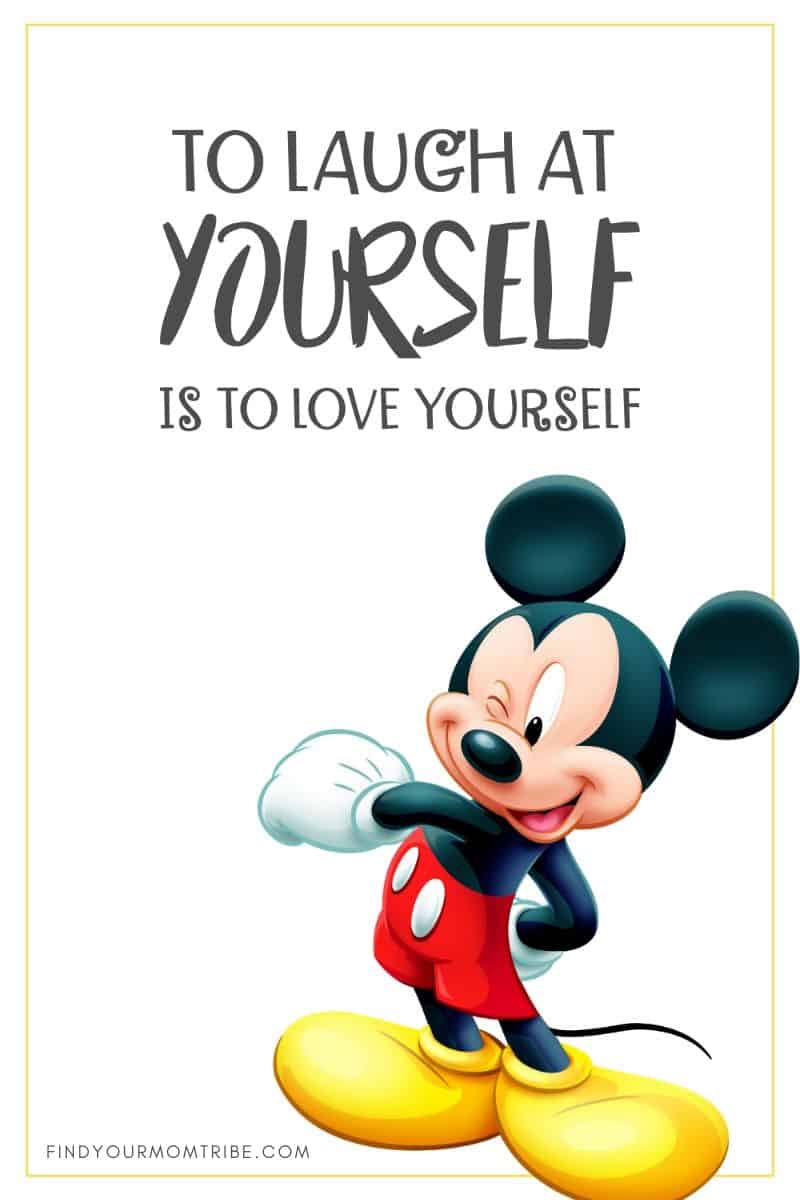 “To laugh at yourself is to love yourself.” – Mickey Mouse

“If everybody got somebody by the hand, maybe everyone could learn and understand.” – Sebastian, The Little Mermaid

“Always let your conscience be your guide.” – The Blue Fairy, Pinocchio

“You are braver than you believe, stronger than you seem, and smarter than you think.” – Christopher Robin, Winnie the Pooh

“Sometimes the right path is not the easiest one.” – Grandmother Willow, Pocahontas

“The very things that hold you down are going to lift you up.” – Timothy Mouse, Dumbo

“A true hero isn’t measured by the size of his strength, but by the strength of his heart.” – Zeus, Hercules

“Giving up is for rookies.” – Philoctetes, Hercules

“Laughter is timeless, imagination has no age, dreams are forever.” – Walt Disney

“Our fate lives within us. You only have to be brave enough to see it.” – Merida, Brave

“The only thing predictable about life is its unpredictability.” – Remy, Ratatouille

“It’s better to use your head than break your back.” – Ernst Robinson, Swiss Family Robinson

“When you’re curious, you find lots of interesting things to do.” – Walt Disney

“You’re mad. Bonkers. Off your head… But I’ll tell you a secret… Some of the best people are.” – Alice, Alice in Wonderland

“Do not be fooled by its commonplace appearance. Like so many things, it is not what is outside, but what is inside that counts.” – Merchant, Aladdin

“You’re never too old to be young.” – Happy, Snow White and the Seven Dwarves

“If watching is all you’re gonna do, then you’re gonna watch your life go by without ya.” – Laverne, The Hunchback of Notre Dame

“I’m only brave when I have to be. Being brave doesn’t mean you go looking for trouble.” – Mufasa, The Lion King

“Every adventure requires a first step.” – Alice, Alice In Wonderland

“A little consideration, a little thought for others, makes all the difference.” – Eeyore, Winnie the Pooh

“People often ask me if I know the secret of success and if I could tell others how to make their dreams come true. My answer is, you do it by working.” – Walt Disney

“Venture outside your comfort zone. The rewards are worth it.” – Rapunzel, Tangled

“All the adversity I’ve had in my life, all my troubles and obstacles, have strengthened me… You may not realize it when it happens, but a kick in the teeth may be the best thing in the world for you.” – Walt Disney

Disney quotes are more than just cute little sayings by even cuter characters.

Most times, there’s a deep, meaningful life lesson to be learned beneath the surface.

I hope you’ve found what you came here looking for, whether it be for a chuckle or two, personal inspiration, or the perfect words to make your special moment one – as Disney Parks’ tagline goes – “Where Dreams Come True.” 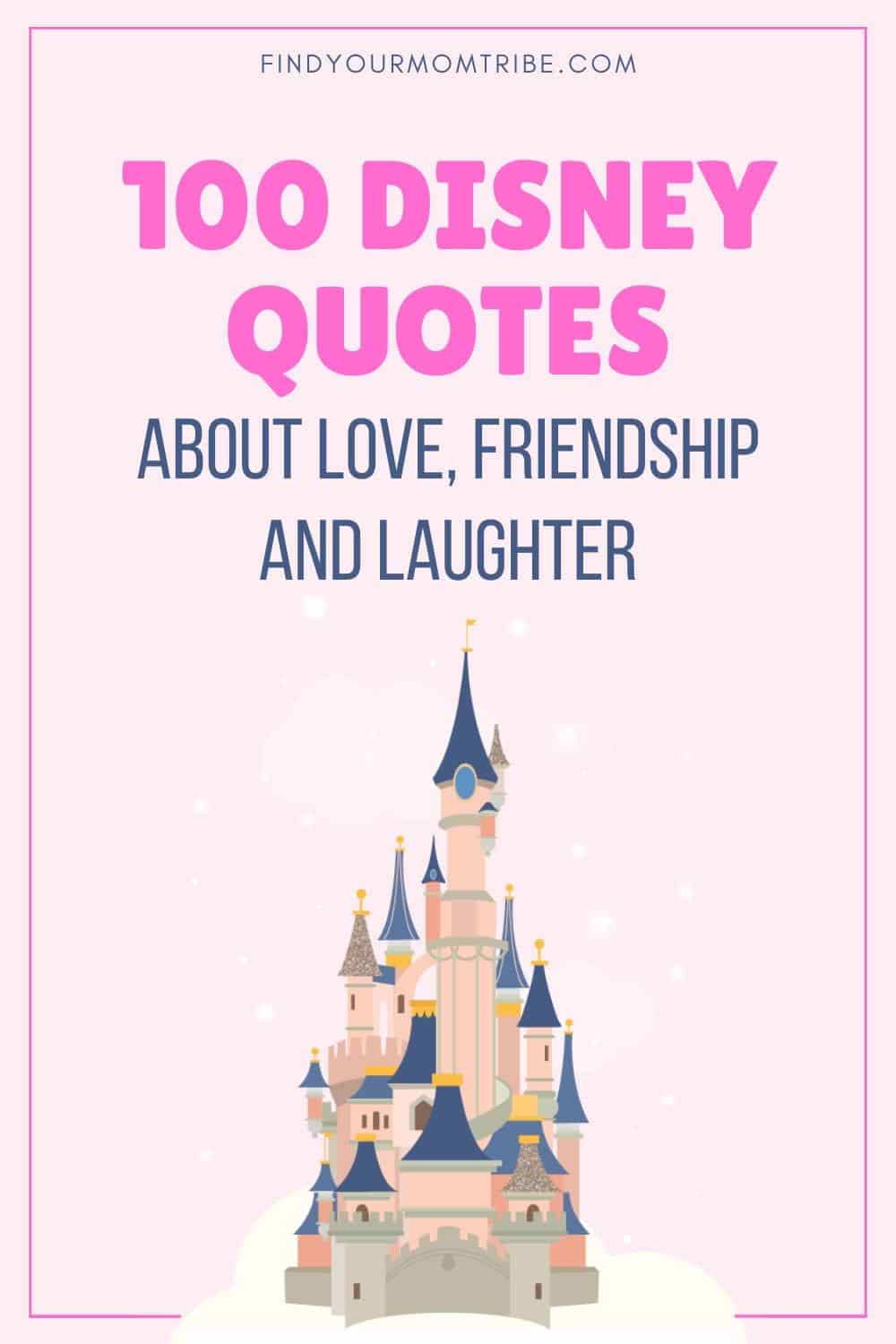