It’s been so long yet it feels like it all went by in a flash. Your little one is all grown up now and it’s already your child’s first day of kindergarten. But will it be as easy as it sounds to just transition into it?

Well, no, not really. There are a number of factors that can make this a bit difficult from both your side and your child’s.

Not necessarily impossible, but there are many different things to consider, whether it’s getting him the necessary school supplies to dealing with separation anxiety.

There’s also the issue of seeing how well he reacts in an entirely new environment, how he copes with the change of scenery, and a whole lot of new faces. It’s not the easiest thing for everyone, I’ll have you know.

To help parents understand what exactly kindergarten is nowadays, it’s the first stepping stone in primary education that kids attend when they reach the age of 5 or 6 where they set the foundations of proper schooling etiquette and simpler versions of classes.

This usually covers things like learning to form lines when walking in, knowing their seating order, raising their hand to ask for stuff, and the like – among basic reading, writing, and arithmetic.

So let’s go through the actual daily plan of your child’s first day at kindergarten and pinpoint what might cause some issues for your precious one later on.

The First Week Of Kindergarten

While some people don’t consider kindergarten part of school, it technically is, despite being somewhat simpler and more relaxed than later formal schooling.

And here is what it usually boils down to.

1. Getting dropped off at kindergarten 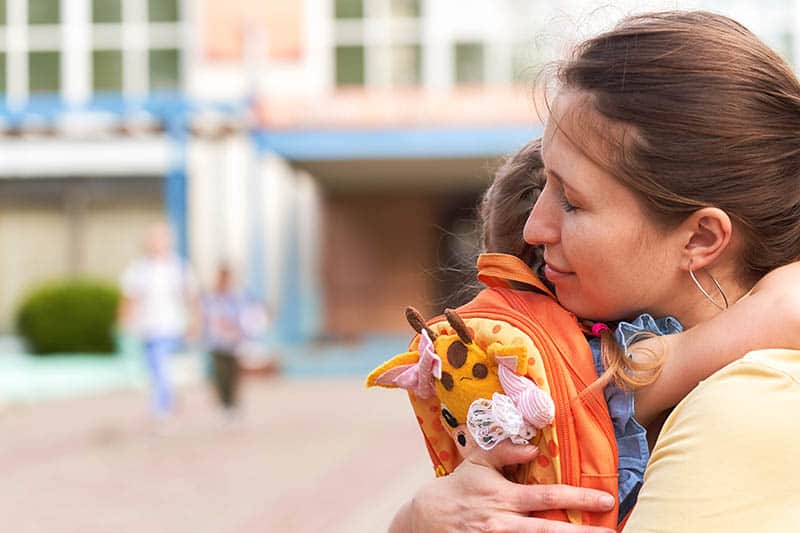 The first drop-off you’ll do with your child is highly likely to turn very emotional for either you, your child, or both (depending on how it goes).

This is where the aforementioned separation anxiety hits the hardest and is bound to involve some tears.

The best thing you can do in this situation is to be the strong one.

Don’t embarrass your child in front of his potential new friends. Keep your emotions until the doors are closed, or wait to let loose at home.

I know it doesn’t exactly sound healthy, but neither is giving your child a poor image amongst the other kindergarteners on his very first day.

You can also greatly numb this feeling by talking it out with your child at home while you’re preparing for his kindergarten journey.

Also, never ever follow your child inside the kindergarten itself. Leave him at the door if you really have to go with him, but let him deal with the rest.

He’s old enough to not need you to lead him around now and all you’ll be doing is making it harder for him to let go.

Just let him enjoy the start of his first school year in peace, in a place where he can explore his individuality. 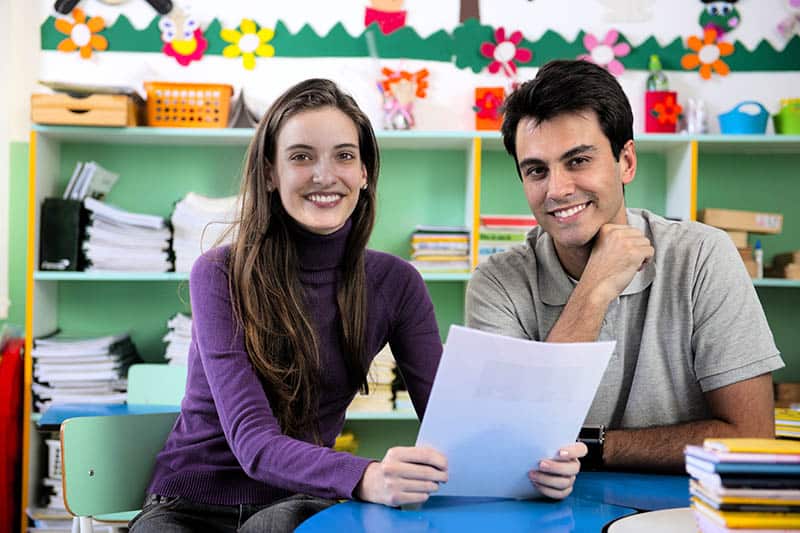 The first adult person your kid will interact with when he first walks through that classroom door is his kindergarten teacher.

This can be a scary experience for him, despite already dealing with one in pre-k if he went to one.

Introducing a new authority figure in someone’s life always induces a dose of anxiety, no matter what. Just look at yourself when talking to a new boss for the first week of a new job.

But, it doesn’t have to be that scary.

Again, it helps to talk to him about what he can expect on his first days, preparing him for what he’s likely to face, and showing him that it’s not as terrifying as it might sound.

(I’d argue reading him this article is probably the right way of going about it, haha.)

Show him that his new teacher is nothing more than a friend who’ll help teach him some new things – a bigger one than all of his other ones he’ll make in kindergarten, but a friend nonetheless.

3. Interacting with the other kids 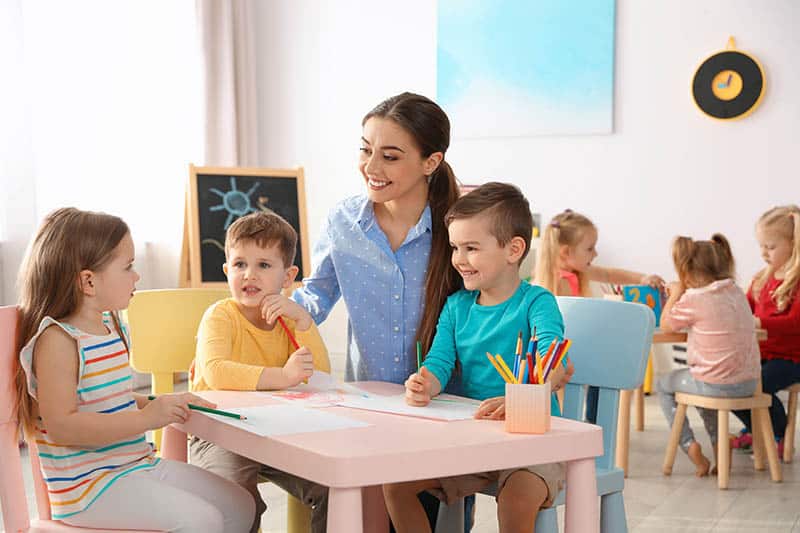 The pressure of entering a new place and having to make friends gets me hyperventilating to this day – and it’s no different for your kids if they’re already starting to be self-conscious.

Luckily, most kids don’t have this issue, but sometimes the problem rears its ugly head when it doesn’t need to.

It’s a good thing that both you and your child’s kindergarten teacher can make the introductions on his first days of kindergarten a whole lot easier.

And it’s all done through a rather simple gesture: name tags!

Name tags help kids learn each other’s names a lot better, gives them a topic of conversation to start off with – an easy icebreaker – and helps them make a lot of new friends among their kindergartner peers. 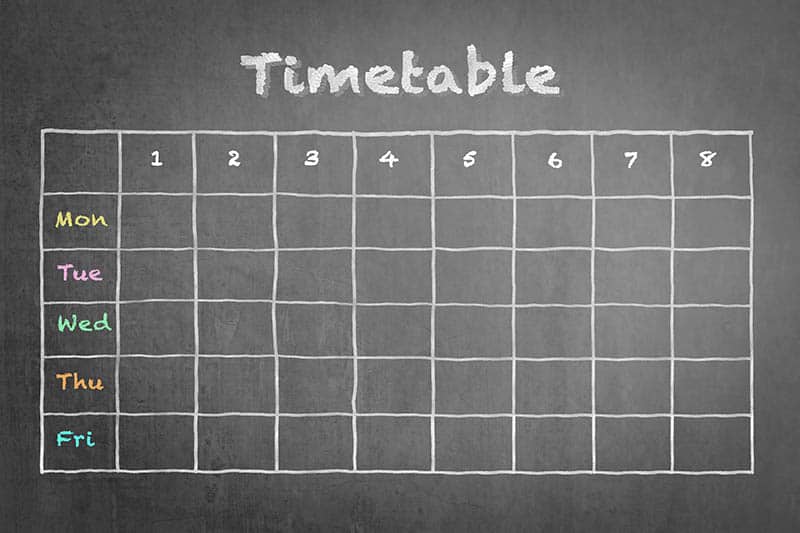 While the first days of kindergarten are usually reserved for introductions of new students and being shown around the kindergarten classroom, the lesson plan is still an important aspect of your own kindergartener’s new journey.

Most of it will revolve around the things already mentioned: learning how to line up, table manners (depending on the kindergarten), and the simple stuff to prepare for the future.

Basic math that only covers addition and subtraction is the most complicated your kid will have to deal with.

The rest of it is spent on learning about proper social interaction and finding a place to channel his excess youthful energy in a positive manner. 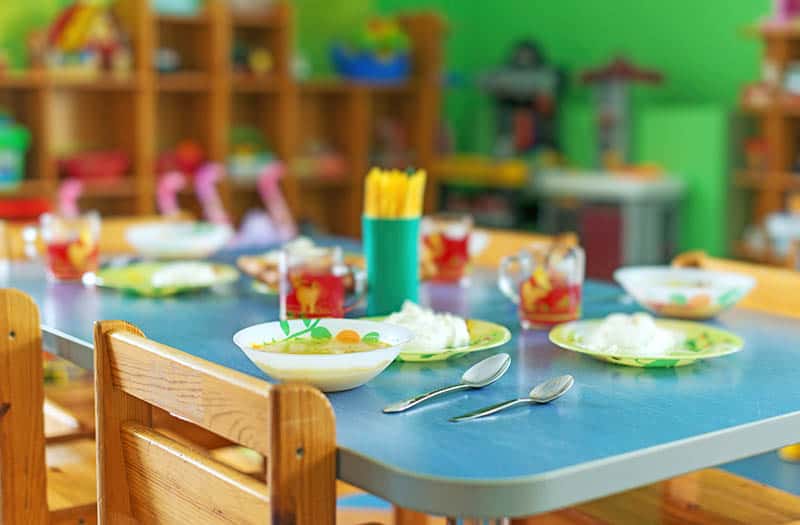 Probably the least of your worries, though hopefully your little kindergartner has learned how to behave himself at the table so he doesn’t cause a scene.

This can easily be avoided by packing a lunchbox for him with something he finds palatable – something that he won’t make that big of a fuss about for when he gets hungry.

That’s because cafeterias won’t normally have the best deals on offer every day. It can’t be taco Tuesday every day, after all.

But, just so you don’t have to make lunch for him every day, it’s helpful to learn what the menu is at the kindergarten.

An added little thing you can do to boost your kid’s morale is to leave him positive notes in his lunchboxes that tell him what a good job he’s doing and that he’s making you proud.

Little gestures like these might not take a lot of time out of your schedule to do, but they’ll mean the world to your kid and make it a lot easier for him to push through even the most stressful of school days. 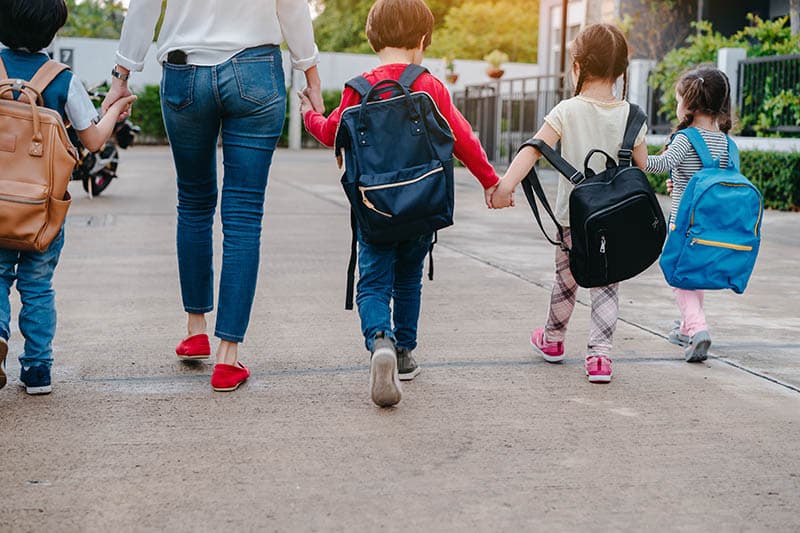 Every kid loves reaching the end of the school day so they can pack up and leave, and your child is no different.

As fun as kindergarten is, being home and being able to go to the playground and have an uninhibited space to express yourself in just feels so much better overall.

Not saying that kindergartens are prisons, but whenever there are rules in place, no matter how loose, they’ll always leave people feeling a bit antsy and confined.

Whatever the case, once your kid leaves his new school for the day and reunites with you, don’t start pressuring him by asking what his day was like.

Not everyone’s first day is going to be the greatest.

Let him open up to you if it wasn’t as good as expected. It’s that weird fallacy of losing the interest to do or talk about something once you’re asked to do so (like being asked to tackle the dishes when you were just about to – dreadful mood killer that I’m guilty of!)

The best thing you can do is just act like everything is normal and provide him with the loving warmth that only you can.

He’ll talk about his day at some point the same day, whether it was spectacularly good or not as much. It’ll just take a few minutes or hours for it to set in for him – no big deal.

Your child’s first day of kindergarten isn’t the most complicated thing to deal with compared with what you’ve had to do during his childhood, but it can still be a mess if mishandled.

The most important thing is to try your best to not interfere with any of it as best as you possibly can and let the kindergarten teachers do their jobs.

Let kindergarten become his own personal haven where he gets to not be under your watchful eye all the time.

That way, he’ll be jumping for joy when it’s time to go back to school.

Sure, that may lead to some small trouble eventually, but generally, it’s nothing major and is easily fixable, as long as you teach him how to behave properly while he’s at home.

That should about do it, mammas.

I hope this was a helpful guide on how the first day of kindergarten looks like through your child’s eyes and that you’ve managed to learn some lessons of your own from it. 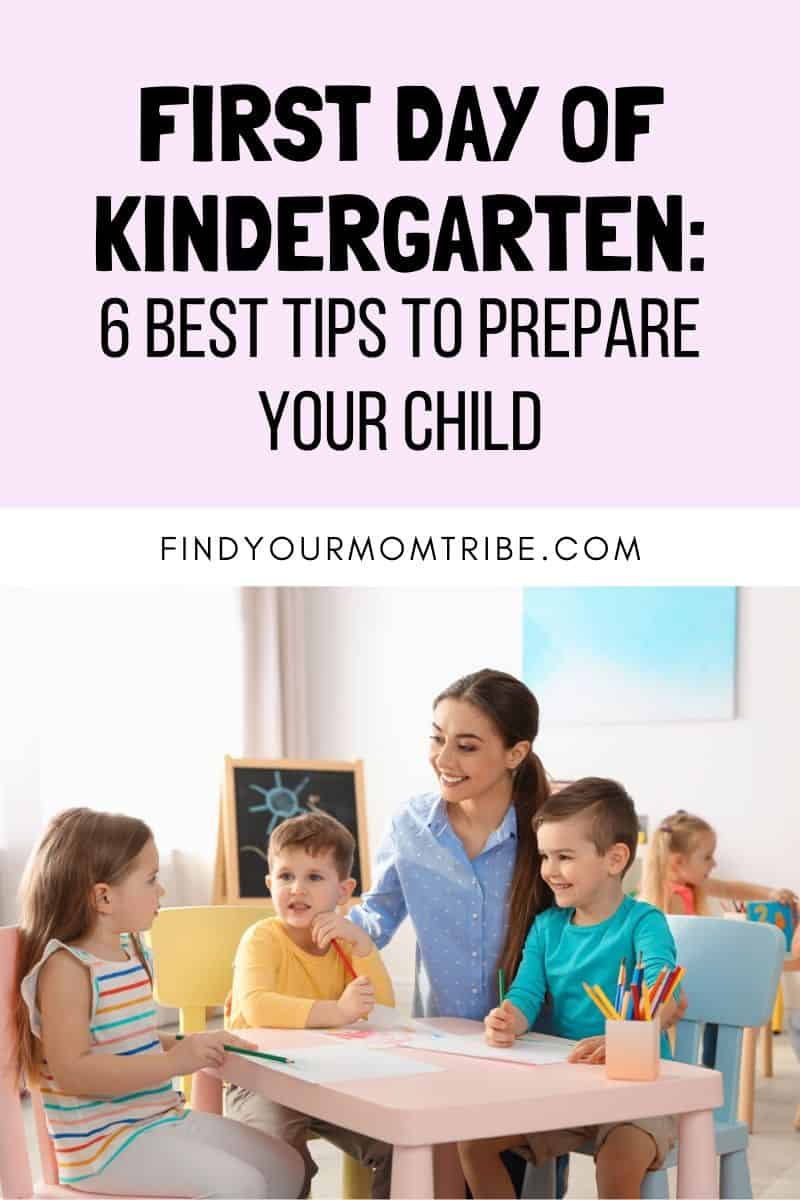