When we talk about tummy trouble during pregnancy most of us think about morning sickness, as it’s one of the most common symptoms of pregnancy.

But frequent bowel movements during pregnancy – third trimester in particular – are common, too.

There are many reasons why you might be experiencing diarrhea or more frequent trips to the bathroom, especially as you approach your due date. 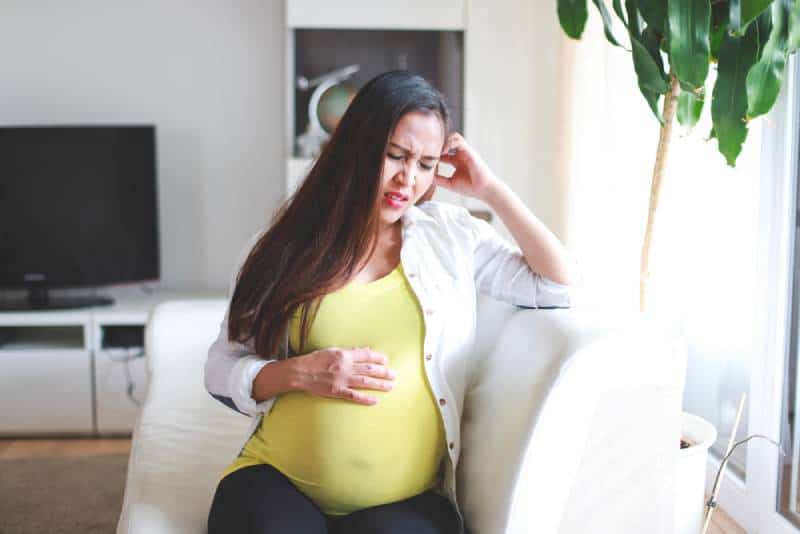 Some are related to hormonal changes, while some can be caused by changes to your diet.
In addition, there are a number of causes that aren’t related to pregnancy that could be giving you gastrointestinal problems.

Going number 2 more often than usual generally isn’t a cause for concern and might even go away on its own, but it’s also important to know what you can do to treat it.

After all, loose bowel movements can be a big nuisance when you’re running errands and it can be irritating having to stay at home just because of diarrhea.

That’s why I will also cover some great home remedies you can try to go back to feeling like your regular self as quickly as possible!

When first finding out that they’re carrying a baby, most pregnant women want to make sure that they’re staying as healthy as possible.

Obviously, that includes ditching any unhealthy habits, such as drinking and smoking, but it also involves changing your diet.

For some women, the change is so significant that their bodies take some time to get used to the new diet, and in the meantime, they might suffer from frequent bowel movements.

If your stomach is really giving you lots of grief, try to make the change gradual, and talk to your doctor about whether you might be overdoing it. You might have also started eating food that your body just isn’t tolerant of.

In addition to healthier diets, another very common cause is prenatal vitamins that many pregnant ladies opt to start taking to make sure their baby develops healthily and is getting all the important nutrients they need.

It might be the case, however, that your stomach is responding badly to a particular ingredient in the vitamins, and that it’s the reason behind your frequent visits to the bathroom. 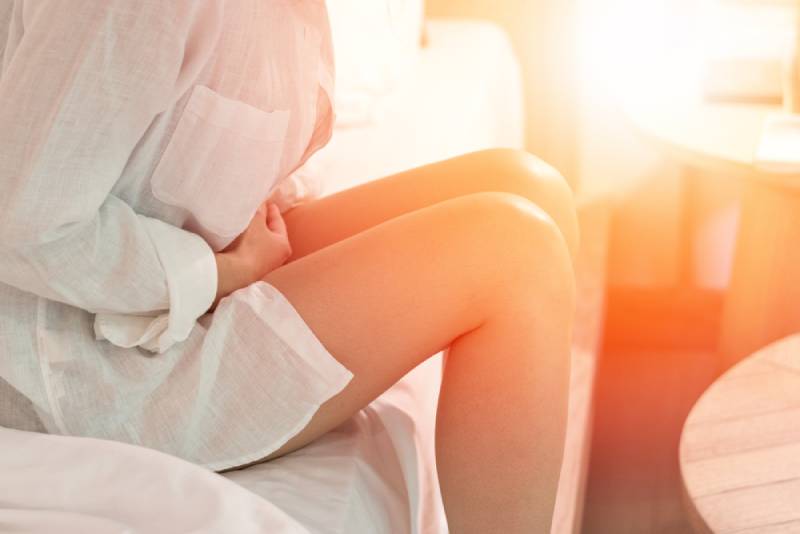 Go over the ingredients list and do some research to see whether one or more could be the cause of stomach problems.

If that happens to be the case, you should stop taking the vitamins and try to find a new brand that will agree more with your digestion.

For example, one of the ingredients of many prenatal vitamins is iron, which is a key supplement that will help you feel energized, prevent fatigue, and will support your baby’s development.

On the other hand, iron can cause another kind of digestive problem – constipation.

So to prevent this, many brands include a stool softener in their supplements. In turn, this can cause diarrhea.

But pregnancy can also bring unexpected changes in terms of a woman becoming sensitive to the food she was able to eat on a daily basis before becoming pregnant.

And this isn’t only limited to going number 2. For example, different smells could cause a pregnant woman to feel nauseous and even throw up, and this is all a result of pregnancy hormones.

Compared to the earlier months of your pregnancy, cases of diarrhea in the final trimester could have entirely different causes, ones that lie in hormonal changes.

During this time, your body is preparing itself for labor and delivery by releasing chemicals called prostaglandins.

They are responsible for creating contractions, and one of its side effects is to cause you to feel like you need to poop more often.

Interestingly enough, this is the same chemical that causes some women to go to the bathroom more often while they’re on their period (the infamous “period poop”). 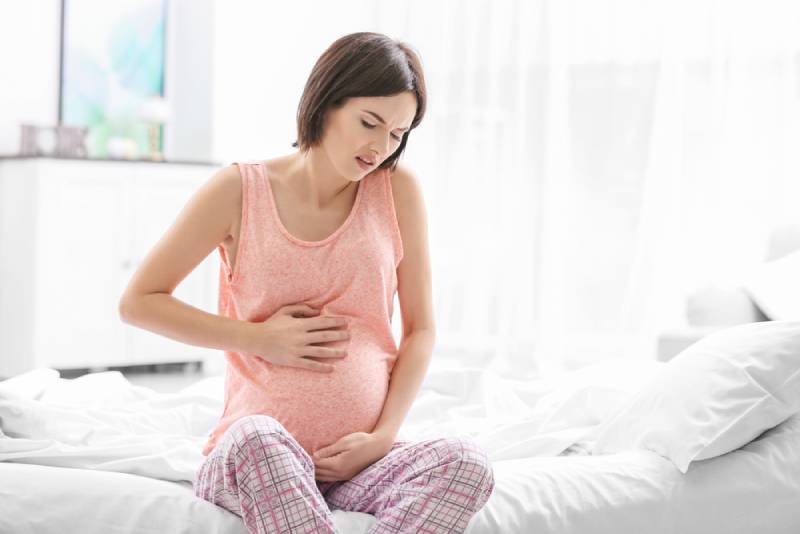 As you get closer to your due date, you can definitely expect looser stools, but if you’re still some weeks off from going into labor, don’t worry that your stomach trouble means you’ll go into premature labor.

In addition to frequent bowel movements in the third trimester, there are other labor signs to look out for, such as back pain and heartburn.

You could also experience the kind of cramping you get while on your period.

So, if frequent bowel movements show up around the same time as these other symptoms, you will know that it’s almost time to meet your baby!

Remember that, just because you’re pregnant, doesn’t necessarily mean that your pregnancy is causing you to have an upset tummy.

In fact, there are many different reasons as to why you’ve been experiencing frequent bowel movements in the third trimester or even early pregnancy.

For example, you might have gotten food poisoning. This happens after you eat food that has been contaminated and is usually accompanied by other symptoms that are equally as uncomfortable.

They include throwing up, feeling very nauseous, cramps in your abdominal area, feeling weak and tired, and not having an appetite. Fever is very common as well.

Considering that food poisoning can be uncomfortable enough for a person who isn’t pregnant, you should definitely call your doctor, who will be able to give you the best advice on how to treat it. 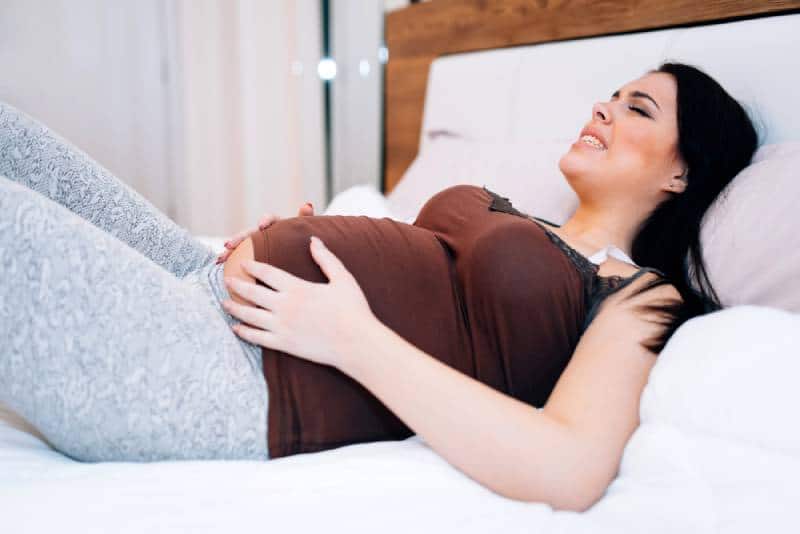 Another very common cause is something called traveler’s diarrhea, which happens when you visit another place or country where the food or water might be contaminated with bacteria.

To prevent this, avoid drinking tap water (and even using it while brushing your teeth) and eating food that you bought from a street vendor.

If you suffer from anxiety, or are going through a particularly stressful period, that could also have a negative effect on your gastrointestinal system.

Since keeping your stress levels under control is particularly important during pregnancy, it’s important to learn techniques that will help you power through stress without it having such an impact on your body.

Yoga and meditation are great ways of finding some peace in the chaos of everyday life, and can help you combat stress before it wreaks havoc on your digestive system.

Home remedies for an upset stomach

Whether you’re in your first trimester or in your third one, there are many great, inexpensive remedies you can try to put a stop to frequent pooping.

Most of the time, the kind of remedies that are effective for women who aren’t pregnant will work for pregnant ladies, too.

For example, a diet called BRAT is a very effective way of helping your digestive system get back to normal when you’re dealing with an upset tummy.

But don’t worry, this diet won’t require you to buy all kinds of expensive or exotic foods. BRAT actually stands for: 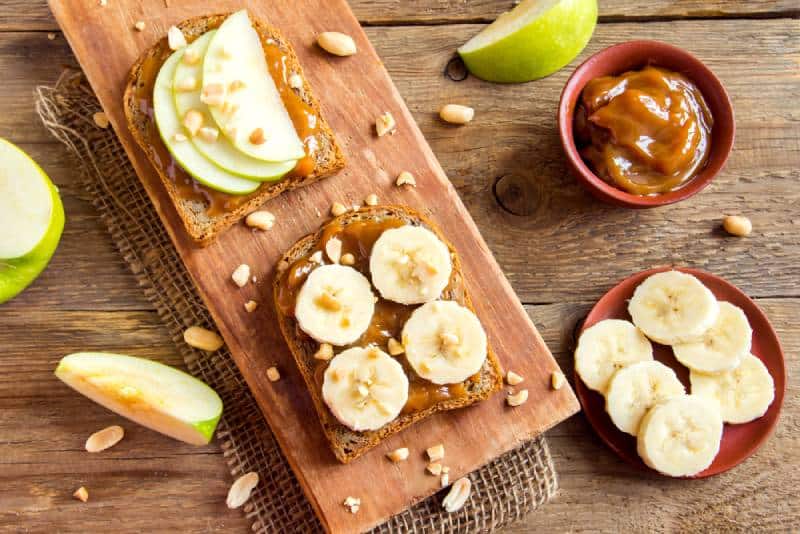 It’s very likely that you already have this food at home, so it won’t be any trouble at all.

All four of these foods do a great job of making your stools more solid, so you can try incorporating them into every meal until the diarrhea symptoms go away.

Rice, bananas, and bread contain fiber, which is crucial when it comes to stopping loose bowel movements.

I also recommend including unseasoned crackers into your diet, as well as potatoes (also unseasoned and boiled).

It’s also helpful to start drinking sports drinks, like Powerade, as they are a great source of electrolytes. Among other things, electrolytes are tasked with keeping your hydration levels optimal.

If you’ve been suffering from diarrhea for a few days, your body will have lost electrolytes that you can replenish through sports drinks. (Just be on the lookout for those that don’t contain caffeine or too much sugar, as these ingredients have mild laxative effects.)

Chicken broth is a great meal option that won’t make your symptoms worse, as well as apple sauce.

In addition, you can talk to your healthcare provider about any over-the-counter medication you can try to improve your condition. 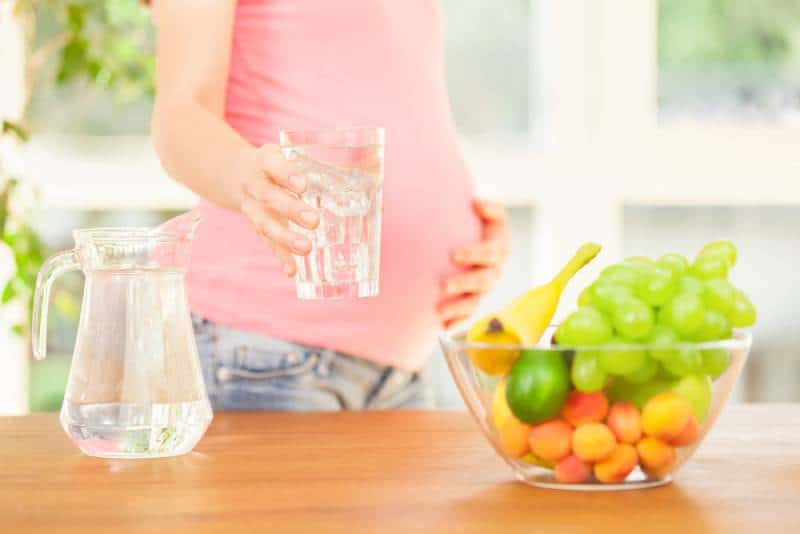 Of course, it’s important to drink plenty of water, too, as hydration is even more important for women who are carrying a baby. Try to drink 10 cups of water every day; all that water has numerous health benefits.

In addition, it reduces the chances of getting a urinary tract infection, which is very important, especially for women who are prone to getting them rather often.

Some experts also recommend drinking probiotics that contain the kind of bacteria that is effective in treating loose stool.

This includes yogurt and kefir, but keep in mind that they also contain lactose.

So if you happen to be lactose intolerant, yogurt can make the frequent bowel movements in the third trimester worse and it’s best to avoid it.

Even if you try and incorporate fiber-rich food in your diet, for example, you’re less likely to feel better if you continue to eat food that could make the symptoms worse.

The first item on this list is soda – it’s filled with sugar that will only make your bathroom trips more frequent.

Besides, soda is generally a very bad dietary choice, so you should try and limit its intake as much as possible, especially during pregnancy.

But make sure not to replace soda with another type of sugary juice, since it will have roughly the same effect on your stomach.

Candy and chocolate should also be avoided because they contain a lot of sugar.

Up next are processed foods, which is a very general term and encompasses a wide variety of food. 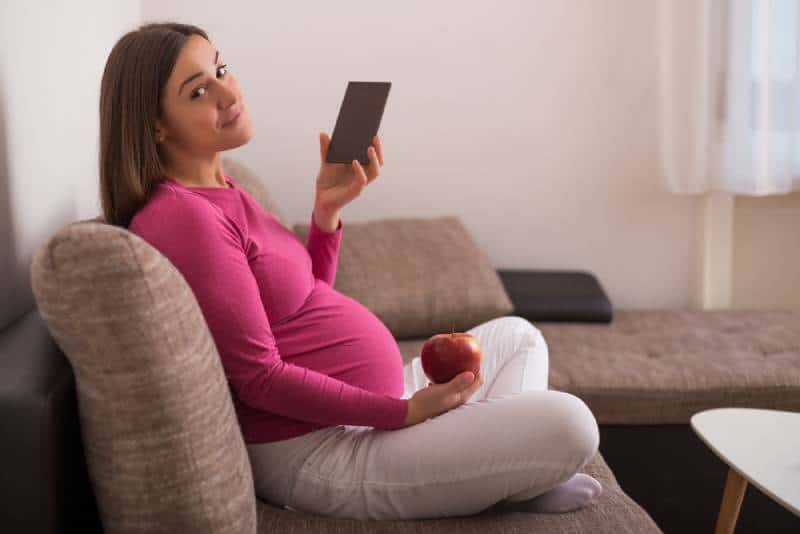 When we talk about processed food, we generally think of cheese, meat such as bacon or ham, and of course snacks like chips (pretzels are okay, though).

These foods are more often than not very high in salt and sugar, which you should avoid until your stomach feels better.

If you’re unsure if something you would like to eat is high in salt or not, here’s a helpful guideline: Anything with more than 1.5 grams of salt in 100 grams belongs to the category of foods that are high in salt.

And even though spicy and seasoned food is delicious, it can only further irritate your stomach, so it’s important that you avoid it – at least until you notice that the diarrhea is gone.

You might also think that fruit is a safe option to eat but, unfortunately, it’s not. Citrus fruits should especially be avoided, as well as grapes, cherries, and the like.

Onions and other raw vegetables should be off your meal plan for a few days, as well.

When to call a doctor

While diarrhea goes away on its own, usually within a couple of days, it’s very important to know when to reach out to a medical professional for help.

You should give your doctor a call in case of the following: 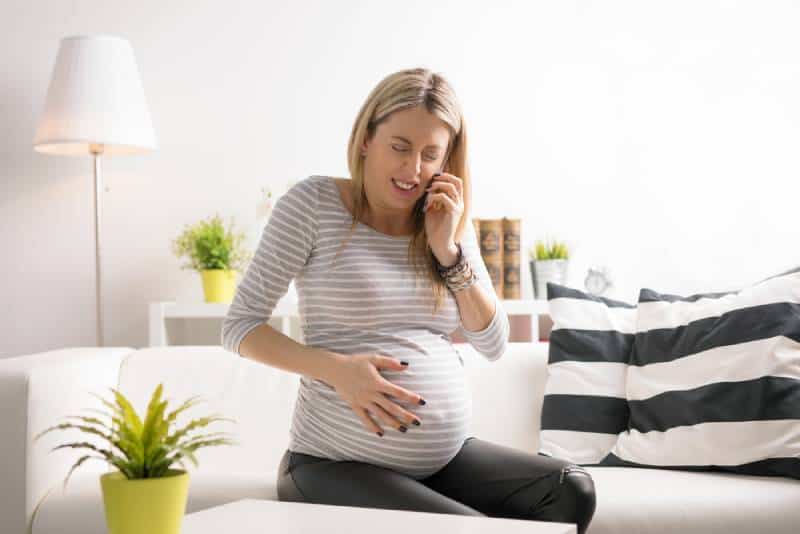 Frequent bowel movements during pregnancy, even during the third trimester, usually aren’t a big cause for concern.

As we have seen, there are numerous reasons as to why your stomach has been causing you trouble, but most of them aren’t too serious.

In the third trimester, loose stools are usually an indication that labor is coming soon as the body releases chemicals that cause contractions.

But if you’re not close to your due date, don’t panic and think you will go into premature labor!

If you’re in the earlier stages of your pregnancy, it’s important to evaluate what dietary changes you have introduced lately that might be causing gastrointestinal issues.

Luckily, diarrhea remedies are very simple and usually quite effective, so you should be feeling better in no time!

But if after a few days you are still feeling off, calling your doctor is always the best course of action. 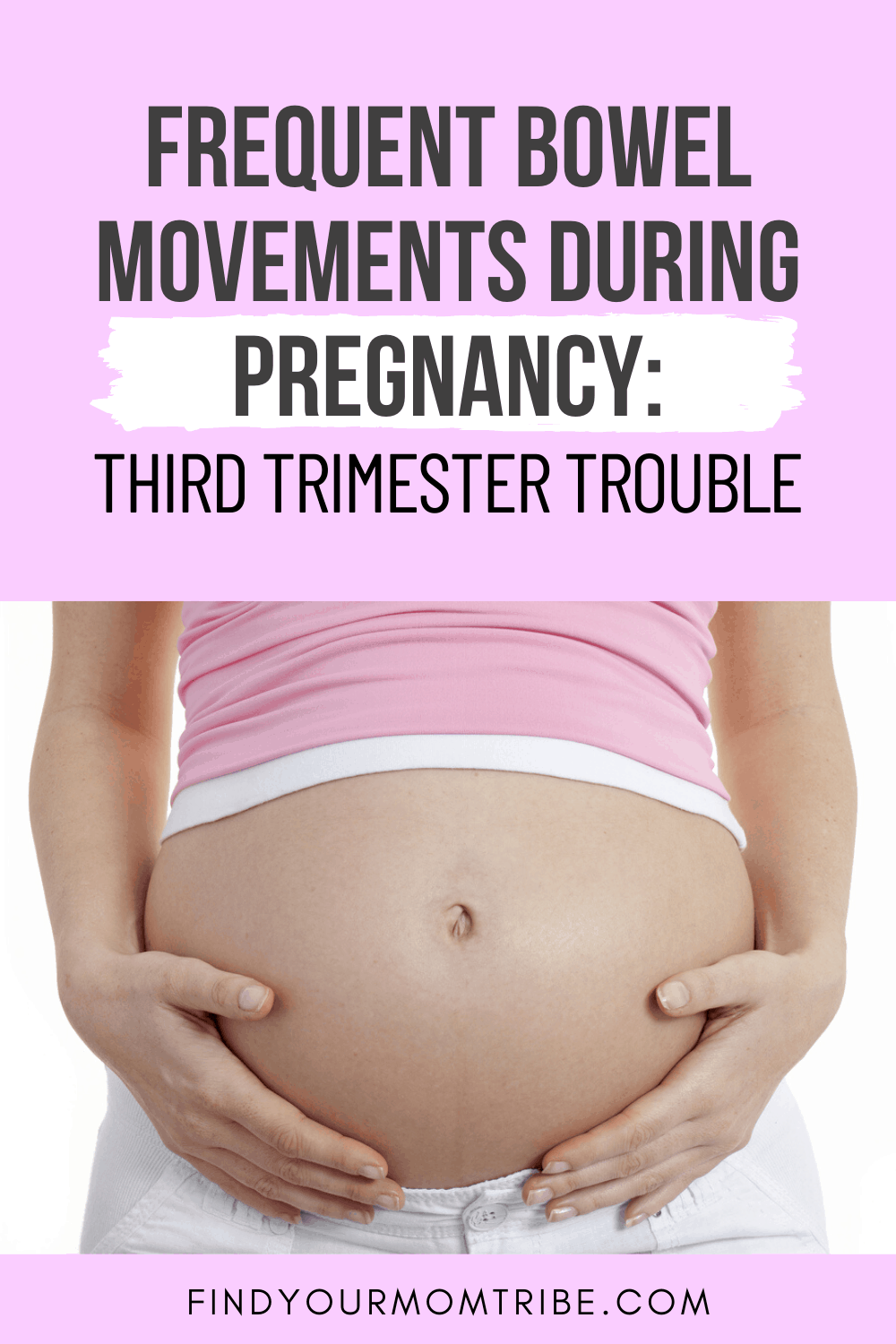