When expecting, women experience a surge of pregnancy hormones, as well as unusual body changes, some of which can be scary and confusing. A hard stomach in pregnancy is one of them.

This cramping is most likely to appear during your second trimester or third trimester and it can best be described as uncomfortable stomach tightening. But what exactly does it mean?

Relax, it’s not necessarily a bad thing. The sharp pain you’re feeling could be due to overeating or constipation but it could also be caused by Braxton Hicks contractions (I’ll elaborate on this later in the article).

To say that pregnant women don’t have it easy is the understatement of the century. From taking the pregnancy test, through to morning sickness and until your water breaks, there are a million things women endure.

Below, I reveal all the possible causes of your hard belly and explain when you should call your healthcare provider.

So, when during pregnancy does your stomach get hard? Here are all the possible causes of your sudden bloating and how you can ease the pain.

8 Reasons Your Stomach Feels Tight In Second And Third Trimester

When expecting, it’s normal to experience changes in your stomach. Your uterus is expanding, and your fetus is constantly moving and growing, which is definitely going to feel different.

But, just because your stomach feels hard, doesn’t necessarily mean that pain will always follow.

A hard stomach during the third trimester of pregnancy can be particularly worrisome, so if the pain is throbbing and it doesn’t go away, you should always consult with your trusted OB/GYN. Better safe than sorry!

Now, let’s get on with the likely causes of your tightening sensation, some of which are pretty harmless, while others require you to visit your doctor. 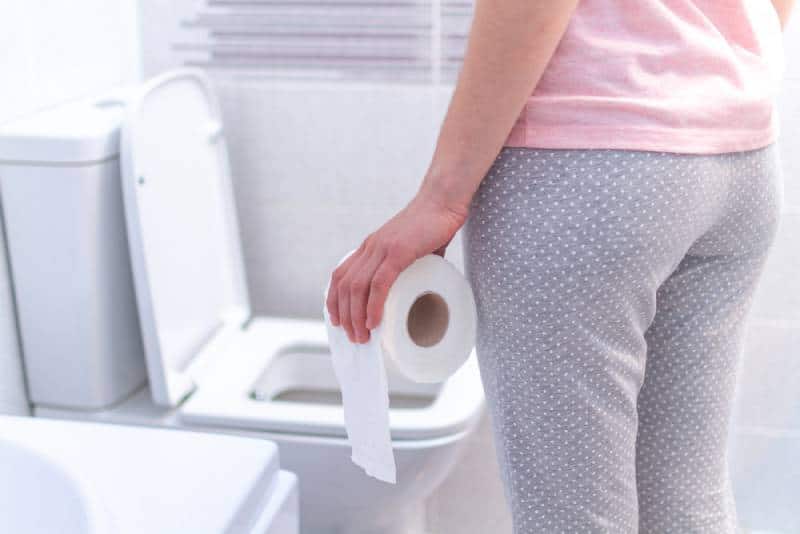 In addition to this, since progesterone is being released into your body, it inevitably affects your tract, which leaves most pregnant women with a hard stomach at some point.

2. Too many carbonated beverages 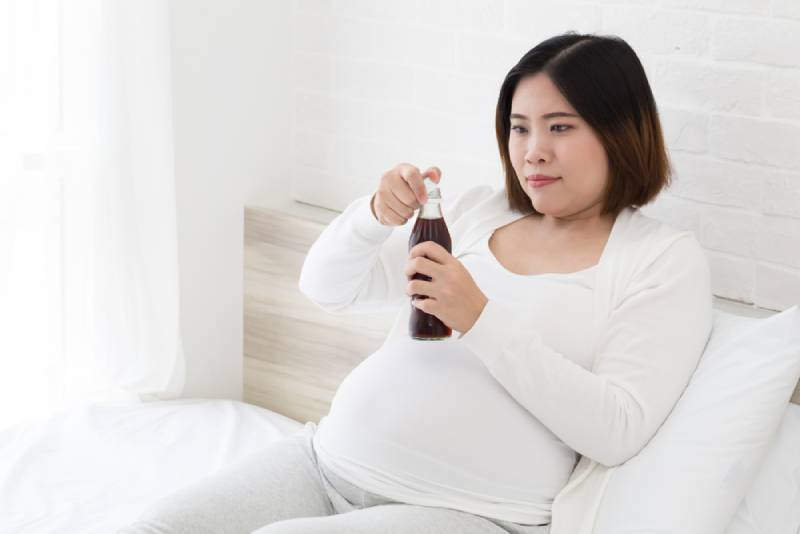 As you probably already know, even when you’re not expecting, the gas from carbonated drinks can cause your stomach to feel tight. When you’re pregnant, it feels even worse.

But luckily, it passes very quickly, so if your stomach is only hard for a short period of time, you can be sure that this is the cause. 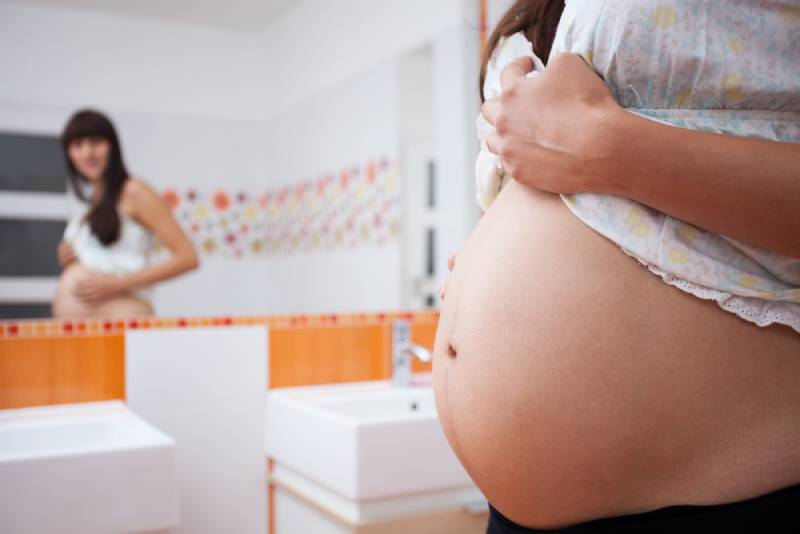 IBS (irritable bowel syndrome) is known to be the reason behind a few specific symptoms, which result in a hard stomach. Among the most prominent ones are severe cramping, abdominal pain, uncomfortable bloating, or just gas. 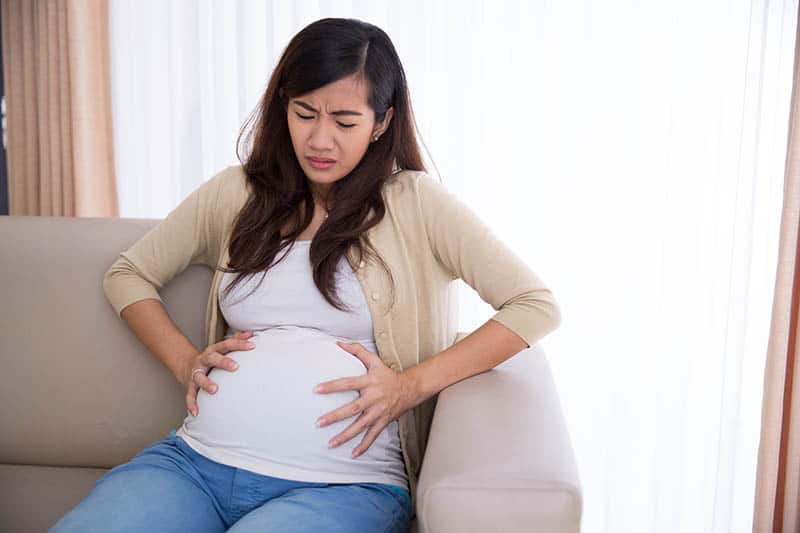 You may not have heard of this gastrointestinal disease which typically occurs when your colon becomes inflamed. But, this can also cause your abdomen to swell and feel tight and uncomfortable.

5. Eating too much at once 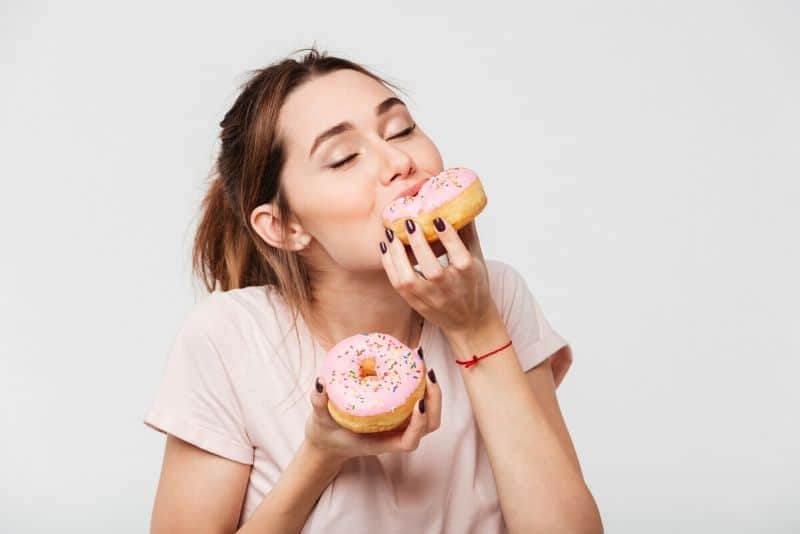 Hey, we’re all guilty of this at some point, there’s no shame in having pregnancy cravings. On the bright side, you’re likely to feel better once the food finally moves through your digestive system and eases up on your stomach. 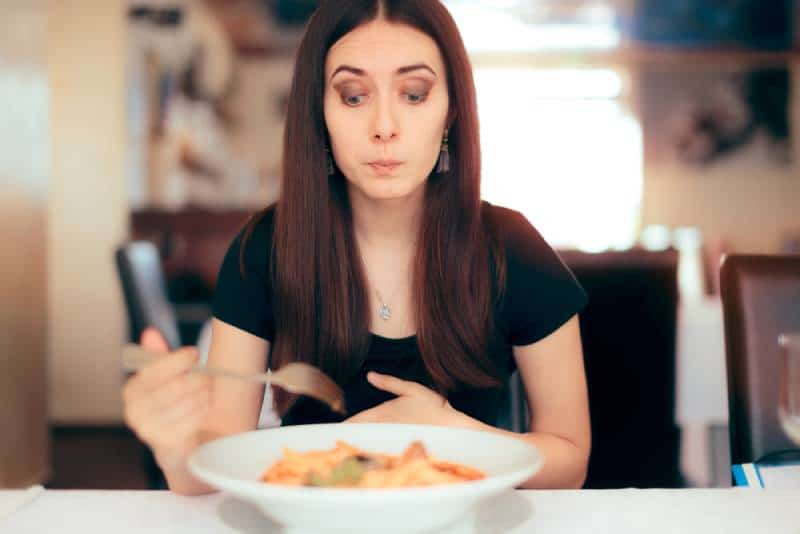 Gastritis occurs when the lining of your stomach becomes inflamed and it is most commonly caused by H. pylori bacterial infection. While it can happen completely unexpectedly (acute pain) you can also experience it gradually (chronic pain).

In case you didn’t know, pregnancy is known to increase your chances of having this disease simply because of all the new changes that your body is going through.

Therefore, this is one of the potential causes of your tight stomach. If it does not go away, feel free to consult with your doctor.

7. Some sort of food intolerance 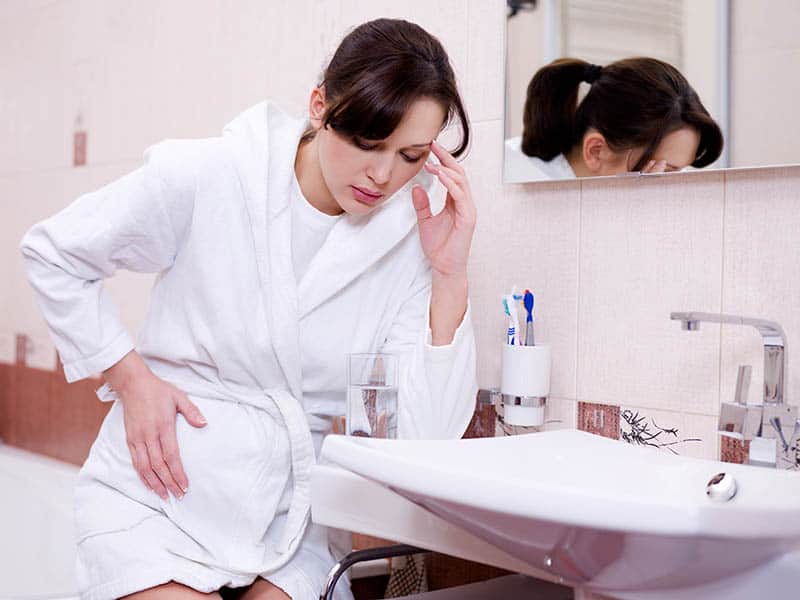 Maybe you’re lactose intolerant, or you’ve discovered that certain foods simply don’t sit well with you during your pregnancy. And this, in turn, may be causing the tightening of your abdomen.

By the time you’ve realized how much discomfort that particular food can cause in your digestive system, you’ve probably already experienced bloatedness, but now that you’re aware, you can simply keep track of what you eat. 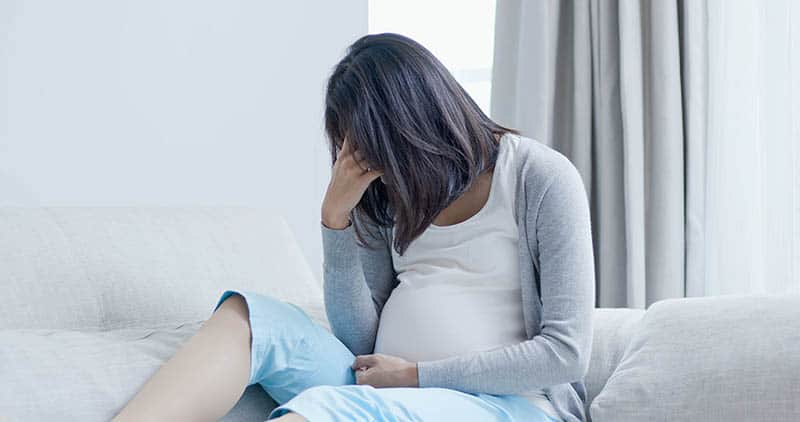 And finally, the most unfortunate possibility that isn’t as likely to be causing this shooting pain, but has to be taken into consideration. Gastric cancer (or stomach cancer) is associated with stomach muscle walls.

While this isn’t a common type of cancer, it is known to cause a tight abdomen in pregnant women, so it’s highly recommended to go for a check-up and rule this out for your peace of mind.

Why Is Your Stomach Tightening In The First Trimester? 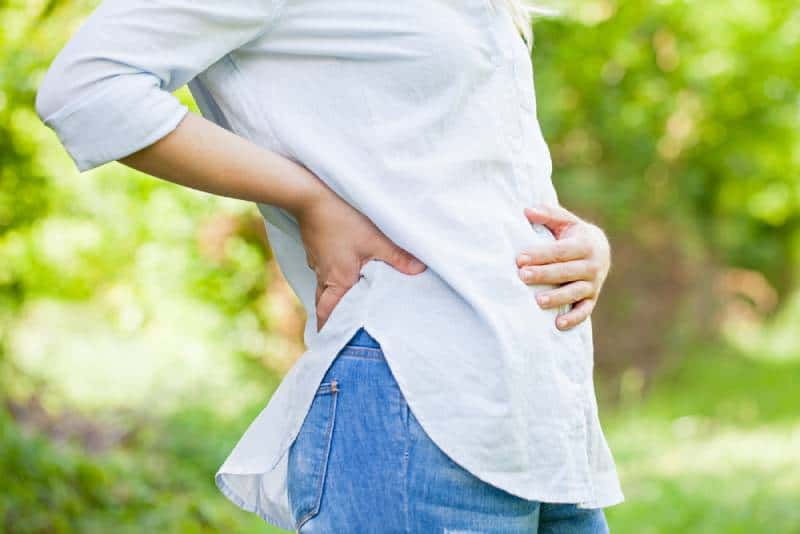 While a hard stomach in pregnancy is commonly associated with pregnancy weeks closer to your due date, it can also occur during early pregnancy for a number of reasons.

From the first pregnancy symptoms up until now, you’ve probably heard a lot about terms such as the placenta, ovulation, fallopian tube, and all kinds of leakage.

But, just in case no one told you about the shooting pain you might feel in the first trimester and to ease any concerns, here’s the 411.

During the first 12 weeks of pregnancy, your uterus is stretching and rapidly growing in order to make room for your ever-growing fetus. This, in turn, might cause mild discomfort.

During this time, you might also experience gas pain. But don’t worry, it’s pretty common for all pregnant women, even though it can also cause a hard stomach from time to time.

And sometimes, on rare occasions, the sudden abdominal pain and a hard belly might signify miscarriage, which is most common in the first trimester.

Signs of miscarriage are easy to miss, so it’s of vital importance that you engage in regular prenatal care and that you allow your OB/GYN to keep track of the fetal development.

What Are Braxton Hicks Contractions? 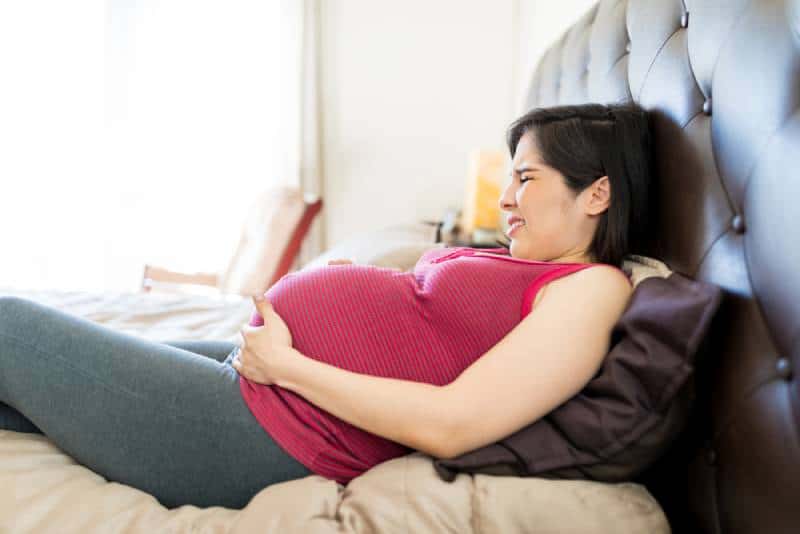 These are known as practice contractions that are very rarely actually signs of labor. They are common in the second or third trimester of pregnancy but they don’t dilate your cervix. Here’s what you need to know:

• Braxton Hicks contractions are most commonly felt in the upper to mid-abdomen, around your belly button area.

• Even though these contractions are not unusual during pregnancy, some women are lucky enough to not experience them at all.

• Normally, they don’t signify preterm labor, so you probably don’t have any reason to worry yet.

• It is unknown why exactly they appear in the first place, but some believe that they are a way of getting the uterus ready for the strenuous birth process.

• They usually manifest as an uncomfortable hardening of the uterus. Their duration is 20-30 seconds and they don’t appear in a particular pattern so it’s impossible to see them coming.

One of the things that might cause them is sudden movement. If you’ve been stationary for a long period of time and then suddenly get up or start exercising, that’ll do it.

They can also happen as a result of physical pleasure (perfectly normal) or due to the baby’s movements in the womb.

These false contractions are also known to strike when you’re dehydrated, which is why drinking enough water is highly recommended.

Have people been touching your stomach excessively lately? Because this can also cause you to go into false labor.

Finally, a full bladder and doing too much without resting enough is likely to result in BH contractions so always keep that in mind.

How can you alleviate the pain?

Unfortunately, you can’t avoid BH contractions, but you can ease the pain. Luckily for you, they are known to be very brief –‌ which means they’ll stop before you’ve felt any significant abdominal pain.

If you’ve recently been experiencing BH contractions on a regular basis, here are a few known remedies that are likely to help alleviate the sharp pain.

• Don’t forget to remain hydrated. Drink as much water as possible as it can be your savior during these intense moments.

• Don’t exert yourself too much. Have a rest and save your energy for true labor. Soon enough, you’re going to feel extreme lower back pain, so you need all the rest you can get.

• A warm bath is known to be relaxing and is a great way to numb the pain.

• Engage in some calming activities that always put you in a good mood (just lay off the physical stuff).

When Is It Time To Visit Your Obstetrician? 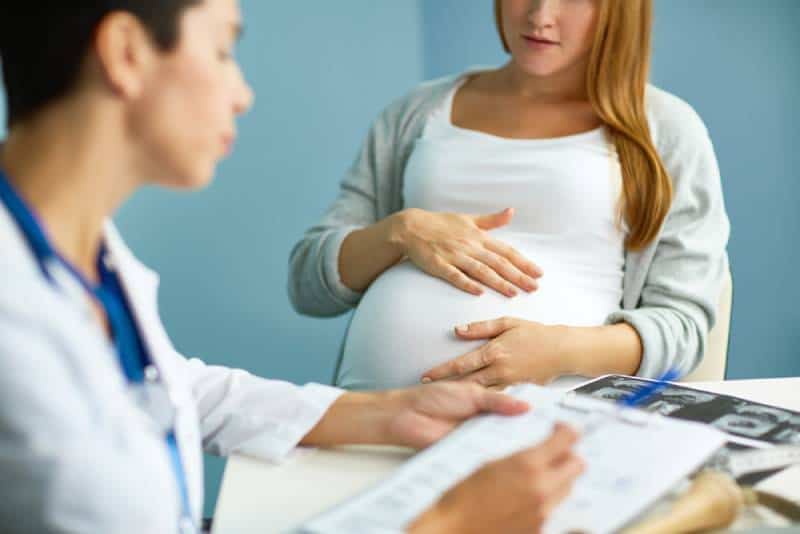 If it’s been several days and your hard stomach has not diminished, it’s time to seek professional help. Things such as excessive vaginal discharge, round ligament pain, and serious backache mustn’t be ignored.

Pregnancy is a beautiful time in a woman’s life, but it’s also a time when you need to be extra careful because now, you’re responsible for two lives.

So the minute you start feeling uncertain about any symptoms that may feel unusual or serious, it’s always best to react on time and be wrong than to ignore them and suffer the consequences later.

If you’ve been experiencing symptoms such as those listed below, get in touch with your primary doctor ASAP:

• Your stools have been overly bloody. Don’t be uncomfortable to share this with your OB/GYN as it is their job to know these things in order to help you properly.

• Lately, you’ve been throwing up a lot, and in rare instances when you’re not, you feel sick. Don’t take these early signs of pregnancy lightly. They can also be the sign of a serious problem.

• On numerous occasions, you’ve had difficulty catching your breath.

• And finally, your skin has started to become a weird yellowish color and you barely recognize yourself in the mirror.

SEE ALSO: Stomach Flu While Pregnant: Is It Dangerous And What To Do

As you can see, there are many possible reasons for your hard stomach in pregnancy. While most of them are connected to digestive issues, there are also those that require medical help.

If you’ve been feeling any of the symptoms mentioned above, don’t hesitate to get in touch with your obstetrician. They will identify the cause of your issue and help you reach your due date safely.

READ NEXT: How To Get Baby To Move In The Womb With 16 Easy Tips 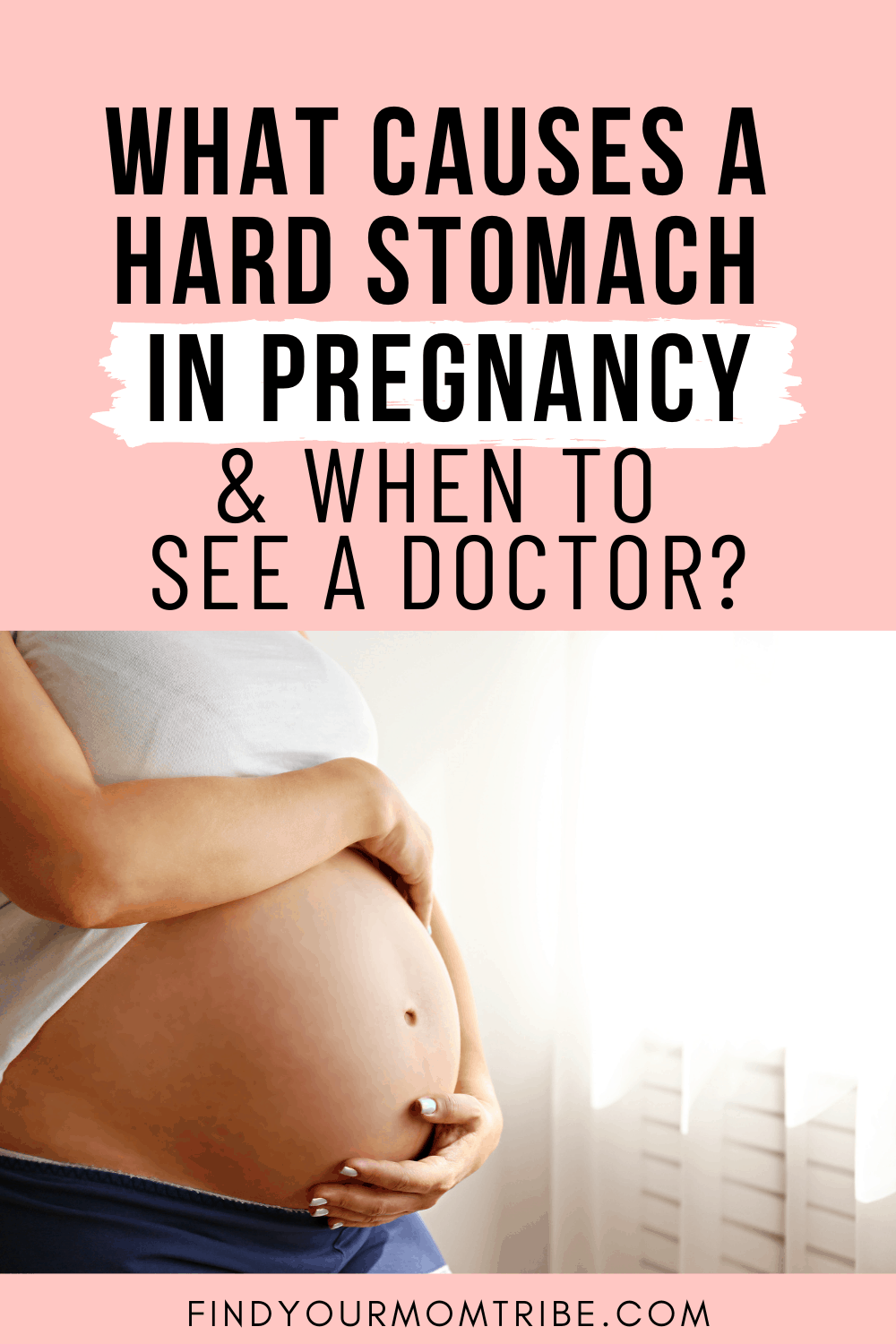