Having a stuffy nose during pregnancy is by no means the end of the world, but having to deal with nasal congestion can be a real pain.

The good news is dealing with a stuffy nose during pregnancy is almost no different from having to deal with it ordinarily, as long as you treat it properly.

Only some edge cases might cause issues and harmful effects for pregnant women and their unborn babies.

Some of you might also hear it referred to as pregnancy rhinitis, but it’s essentially the exact same thing.

The one major difference is that this form of nasal congestion is known to last for anywhere between 6 to 10 weeks.

It also only happens in specific pregnancy stages, namely early on in your first trimester or anywhere in the latter half of your third trimester.

And it’s not as uncommon as people may think, affecting around 20-40 percent of pregnant women worldwide.

But, as I’ve said already, it’s relatively harmless unless the blocked nasal passages interfere with your natural sleep schedule and give you some sort of sleep disorder.

In that case, your baby might be at a higher risk of developmental complications due to an irregular oxygen supply.

So how can we know if a stuffy nose in early pregnancy is dangerous or not, and what can we do to help prevent it from being such a pain?

Well, it only takes a few simple things. Let’s see what they are together.

Symptoms Of A Stuffy Nose During Pregnancy 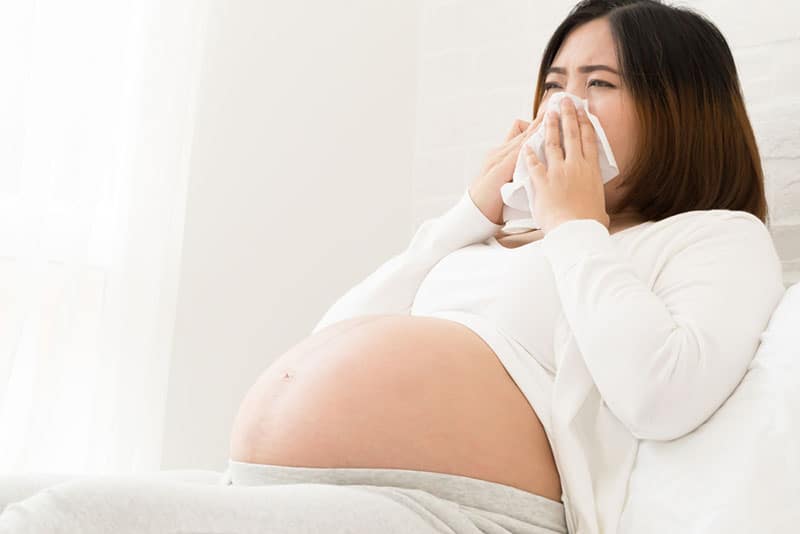 As always, the most important thing to note when checking if you’re suffering from pregnancy rhinitis is to know the symptoms.

They’re rather easy to spot, given how they’re exactly the same as a regular stuffy nose. These are:

Do note that this can also be a sign of sinusitis or just the seasonal common cold, each coming with issues in their own right.

That said, if it’s a sinus infection that’s affecting you, you might want to treat the symptoms quickly so you don’t have to deal with the annoyances that come with them.

That’s why, even if it seems like a harmless bit of nasal congestion when you get a stuffy nose during pregnancy, still make sure to contact your doctor or health care provider so he can properly diagnose what’s going on in your body.

What Causes Pregnancy Rhinitis In The First Place? 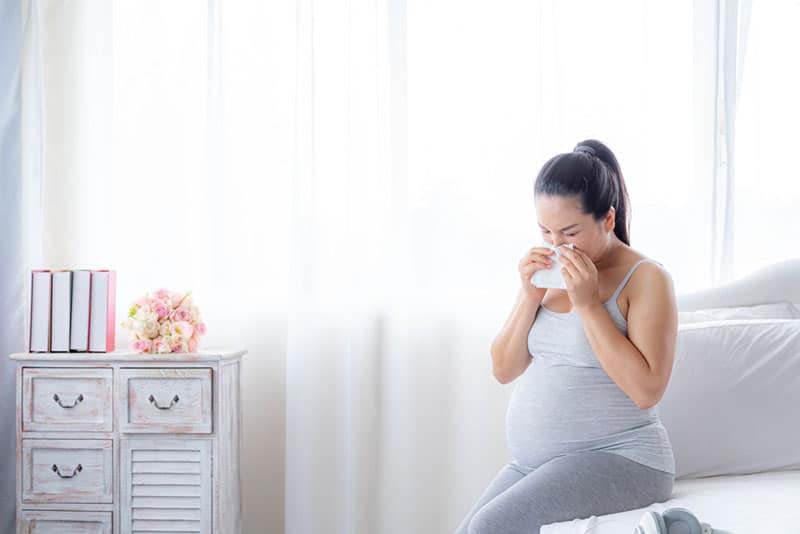 While there are many potential culprits that lead to a stuffy nose during pregnancy, not all of them are going to lead to the same result.

But, the most common cause is the pregnancy itself due to the expanded blood vessels in your body, which help transfer oxygen to both you and your growing baby.

Hence why the blood flow increases as well, causing many of your other membranes to swell up and expand, including the mucous membranes in your nose.

Then they soften up and start oozing that nasty nasal slime that stuffs up your nose.

And, because of this increased blood flow and how much thinner that membrane is, blowing your nose leads to a higher risk of nosebleeds.

So don’t be shocked if your tissue gets painted red on top of that sickly mucus.

Pregnancy rhinitis is all due to the erratic spikes in your hormone levels, especially progesterone and estrogen, though there’s little you can do about that as that’s a normal part of any pregnancy.

It’s just that some women’s bodies take it differently than others.

That said, the other cause of a stuffy nose during pregnancy is one that’s more common and easier to overcome, and that is allergic rhinitis.

I doubt I need to go into detail explaining how allergens like cigarette smoke, pollen, or dust are a cause of respiratory disorders (be they mild or severe), and that the most common side effect is a stuffy nose.

That said, there is a difference between these two forms of rhinitis in that the symptoms of allergic rhinitis tend to be a degree or two more severe than regular pregnancy rhinitis, with added problems like:

And finally, the last potential cause can be a sinus infection, as I’ve mentioned earlier. This can be rather nasty to deal with, so a stuffy nose becomes the least of your worries.

It’s often caused by hormonal changes in your body during pregnancy as the levels spike wildly, leading to a somewhat compromised immune system (for the sake of protecting your child).

The expanding blood vessels and increased blood flow also contribute to increased chances of a sinus infection during pregnancy.

While they only last for a few weeks, a sinus infection tends to have some rather annoying symptoms, some of the worst include:

• An irritated/sore throat from postnasal drip

• Loss of sense of smell/taste

• The appearance of black ulcers in some heavier cases

And these headaches especially are a nightmare to deal with.

This is why it’s important to go to your obstetrician (OB/GYN) or any other qualified healthcare professional to help determine the root of your problem, given how the three share many symptoms, albeit not equal in severity.

And, when paired with all the other pregnancy symptoms and random potential complications, they end up making us feel horrid, so it’s best to eliminate or at least prevent the ones that we can.

How Long Does Pregnancy Rhinitis Last?

Usually, it goes for a minimum of 6 weeks, but depending on the severity of the inflammation of your mucous membrane, it can go all the way up to 10+ weeks.

Though, if you end up getting it late into your pregnancy and near your due date, it might be shorter as your hormone levels start normalizing after delivery of your baby.

Treating A Stuffy Nose During Pregnancy 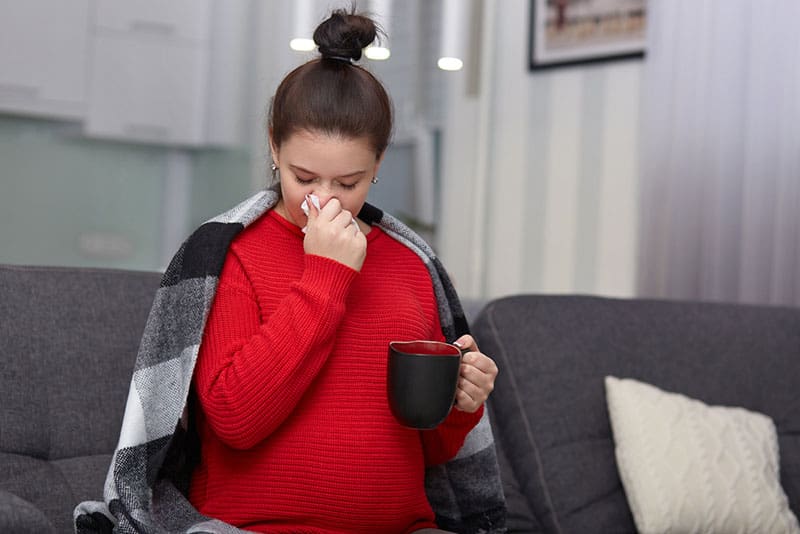 Luckily, properly treating nasal congestion during pregnancy isn’t too difficult and anyone can do it.

There are plenty of ways to go about it and most are readily available either over the counter or as a simple home solution.

That said, nasal irrigation with saline solution, either homemade using a neti pot or with a store-bought saline spray, is probably one of the best ways of dealing with a stuffy nose.

It practically melts through all the gunk and helps clear both your nostrils and your sinuses.

The only downside is that if you don’t blow it out and keep inhaling through your nose, it’ll all travel down your throat and then you’re going to have all the fun of coughing it out.

Your throat may get a little irritated, but other than that, you should be alright and be able to breathe through your nose again soon enough.

The other good, over the counter method is the use of nasal strips.

These neat little bands are placed over the nose, where their elasticity helps to open your nasal passages by expanding the nostril flares.

The same is done to the sinus passages as well and they have an almost instantaneous decongesting effect and the added bonus of reducing congestion-induced snoring.

That helps greatly reduce the aforementioned risk of sleep disorders that can deprive you and your baby of oxygen.

Some antihistamines are also safe to take to help clear your nose, especially if a sinus infection is at play.

Another good, pregnancy-safe remedy for a stuffy nose during pregnancy that you can try at home is to simply run a warm shower or bath and let the steam help soften the mucus and clear your nostrils so you can breathe again. (Not to mention the added effect of relaxation and reinvigoration!)

EXTRA: What NOT To Use To Treat Nasal Congestion During Pregnancy 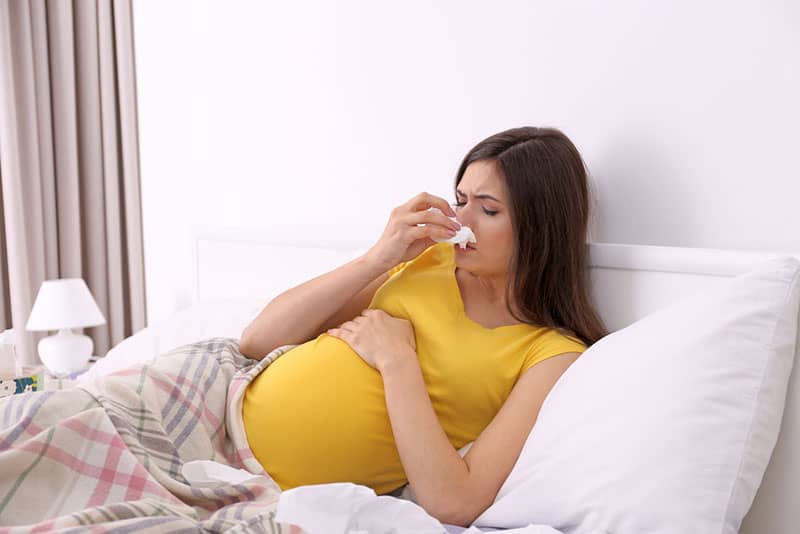 What you shouldn’t use when looking to treat any form of nasal stuffiness are many types of nasal sprays and medicine-based nasal decongestants.

That’s because a lot of them contain medicine that isn’t safe to use during pregnancy and can negatively affect your baby’s health – something you most certainly want to avoid, I’m sure.

Before you opt for any sort of medicine, always make sure your obstetrician, doctor or any other qualified healthcare provider okays it first, just in case it might have any negative effects on you or your child.

Some of them only end up affecting you later when your breastfeeding period starts.

They could even interfere with the quality of breast milk and overall milk production, depending on how your body reacts to them.

Dealing With The Other Symptoms That Come With Nasal Stuffiness

A stuffy nose isn’t the only problem that arises though, as we’ve seen with all the other nasty symptoms that come about with it – nose bleeds can be an issue too, thanks to the expanded blood vessels.

The best way to deal with those is to lean forward and let it drip out and close itself or plug it up with a tissue or a bit of toilet paper until it dries up and closes.

Don’t lean back, as that’ll only make it drip down into your throat and mix with the phlegm, making you nauseous – and trust me, you don’t want to pair that with bouts of morning sickness.

The other common problem is a sore throat. While using a humidifier can solve that easily enough, lozenges, teas, and lemons can also help soothe an agitated throat. 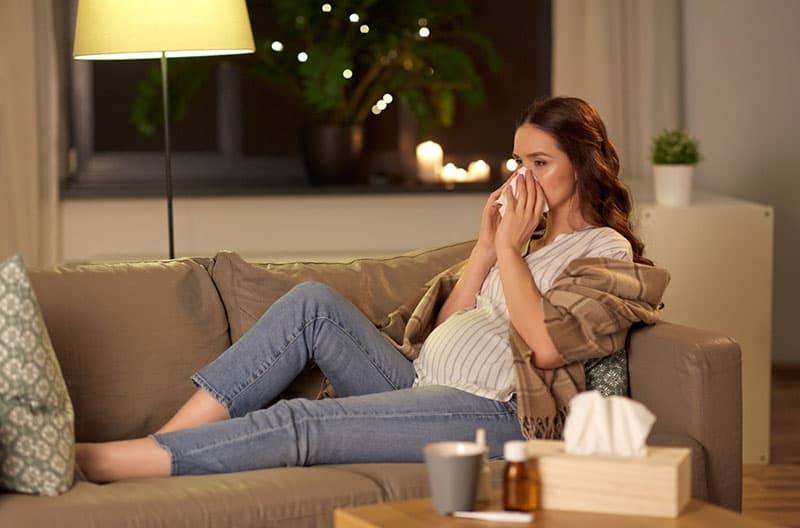 Though all of these treatment options work wonders, what you really should be doing if you aren’t suffering from nasal congestion right now and you’re pregnant is trying to prevent it from happening in the first place.

And the two best methods are making sure you get a healthy dose of vitamin C daily and that you use humidifiers, at least when you go to sleep.

Vitamin C is an obvious one, it helps beef up your immune system, which in turn will help prevent many of the causes of a stuffy nose during pregnancy.

On the other hand, a humidifier is something I wholeheartedly recommend using before you go to bed, regardless if you’re pregnant or not.

It helps relieve some of those nasty sinus headaches and makes your coughs less dry and the throat more moist, so you’re actually able to cough out the cause of the throat irritation.

A humidifier also helps add moisture to the air to prevent any further irritation of the nasal passages, throat, and even skin, plus they’re great at reducing the chances of snoring.

While seemingly harmless on the surface, a stuffy nose during pregnancy has a small chance of causing some developmental issues for the baby and a whole lot of annoyances for you during your pregnancy.

The best thing you can do is to keep your daily intake of vitamin C up and take care of yourself.

Oh, and use a humidifier – or get one if you don’t have already. It’ll be your go-to option for helping to both prevent a stuffy nose and treat it should you start feeling a little clogged up.

Other than that, your best bet is to schedule an appointment with your doctor, OB/GYN, or any other certified healthcare professional and explain the symptoms to them so they can make a proper diagnosis.

They’ll be able to discover the root cause of the issue and what type of nasal congestion you’re suffering from, as well as recommend the proper treatment methods.

As always, mammas, I wish you health and happiness! 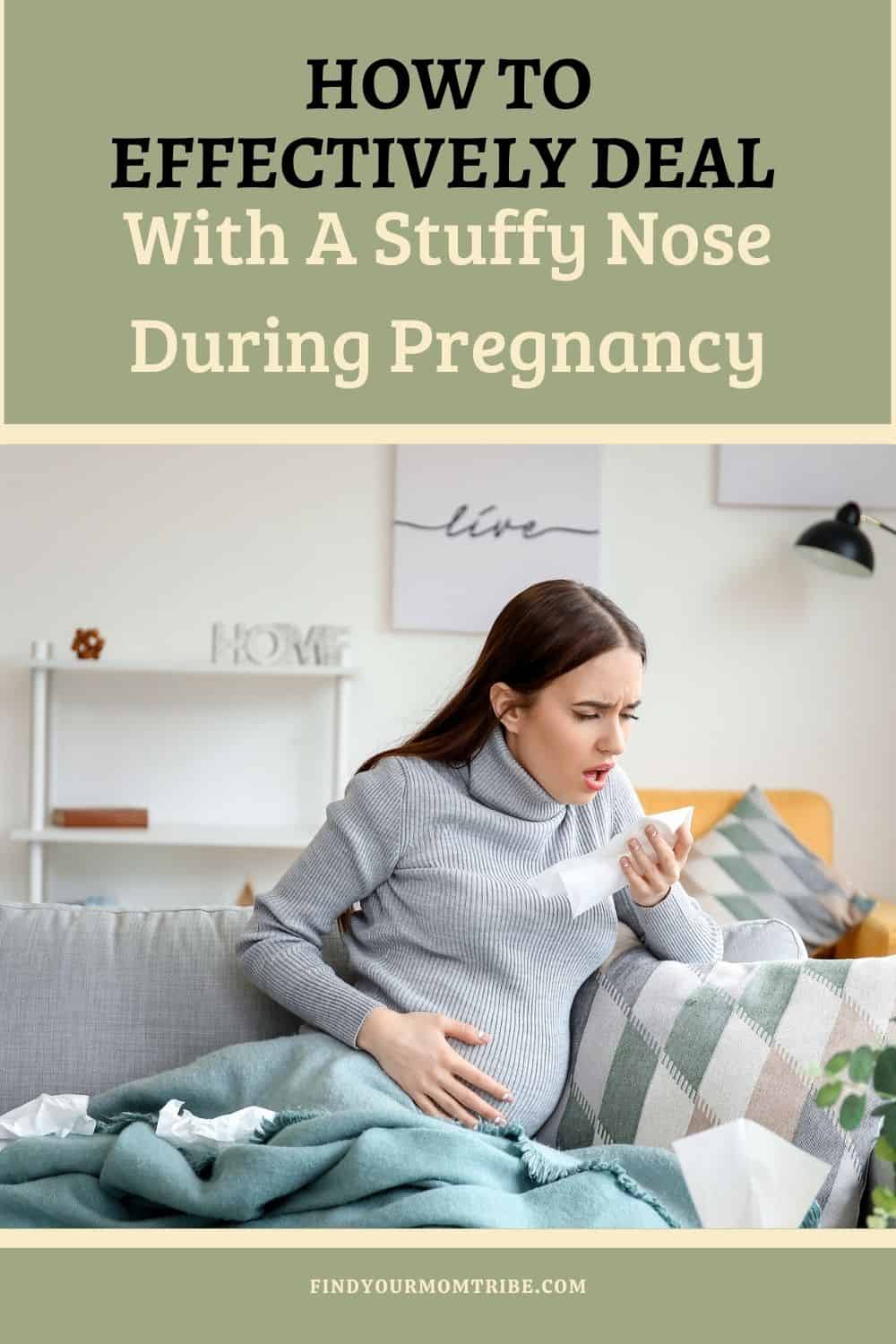