Initially, every mother expects their breast milk color to take on a white tint, just like regular milk, but this is not always the case.

The reality is that breast milk color can actually vary quite a bit, with the regular coloration being of a slightly yellowish or bluish hue.

You’ll find that the color of your breast milk also changes based on what you eat and put into your body in general, be it food, drink, or even some types of medicine.

But, luckily, most of these changes in pigment are nothing super serious and needn’t cause concern.

Most of the time, it’s all just a harmless and temporary change, although sometimes it can be a sign of an infection or something similar.

If you suspect this may be the case, it’s helpful to call upon your local doctor, lactation consultant (IBCLC), or any other qualified health care provider for a check-up just to make sure it’s not something bad.

This will only be necessary for certain color changes.

So don’t worry, many breastfeeding moms are bound to encounter a slightly different color to their breast milk here and there and there’s nothing wrong with that.

With that said, it’s time to find out what events and foods can change the color of your breast milk.

What Is The ‘Normal’ Breast Milk Color? 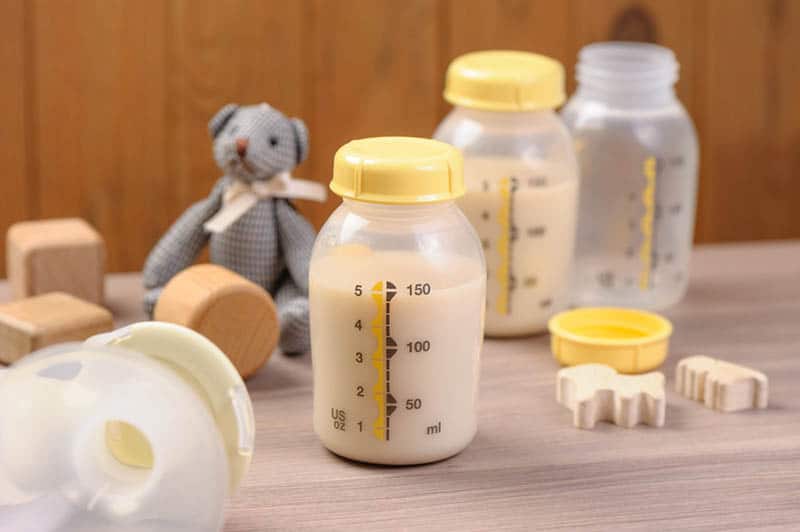 I use the term ‘normal’ loosely because it honestly depends from mother to mother much like everything else does.

That’s why there’s not just one definitive answer when people ask what color breast milk should be.

After a few weeks postpartum, breast milk will typically be more or less how you’d expect it, creamy and white-ish.

It can take on shades of yellow or even blue depending on the amount of fat it contains.

All three of these states are what we’d consider normal without any interference from outside factors.

Breast Milk Colors And Their Meanings 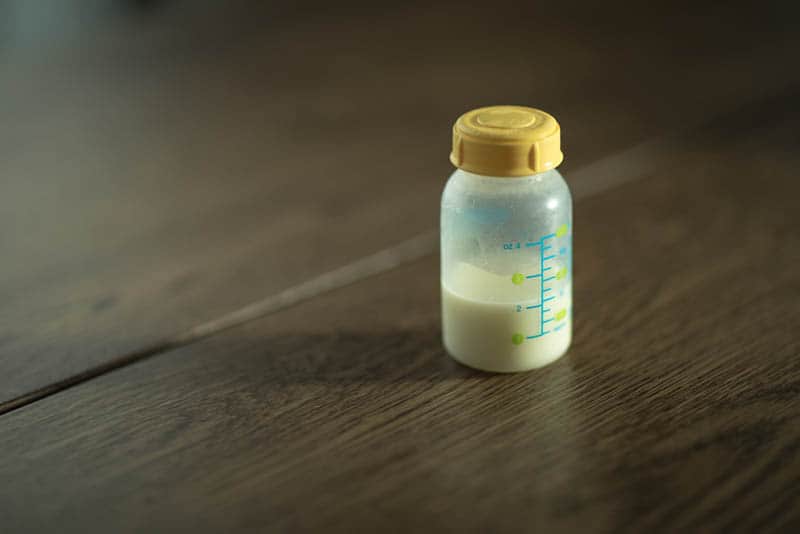 The first question a new mom might ask when breastfeeding for the first time is: Why is my breast milk yellow?

That’s because the initial few batches of milk are what is known as colostrum or first milk and it normally comes out as a thicker liquid with quite a yellowish tint to it.

That’s due to the milk’s richness in antibodies and healthy nutrients.

It’s the crème de la crème of milk and it’s recommended that your child should not skip out on it as it serves to build up his immune system.

The other reason is that you won’t be producing colostrum forever, only for the first week, give or take a few days, hence its other name being first milk. 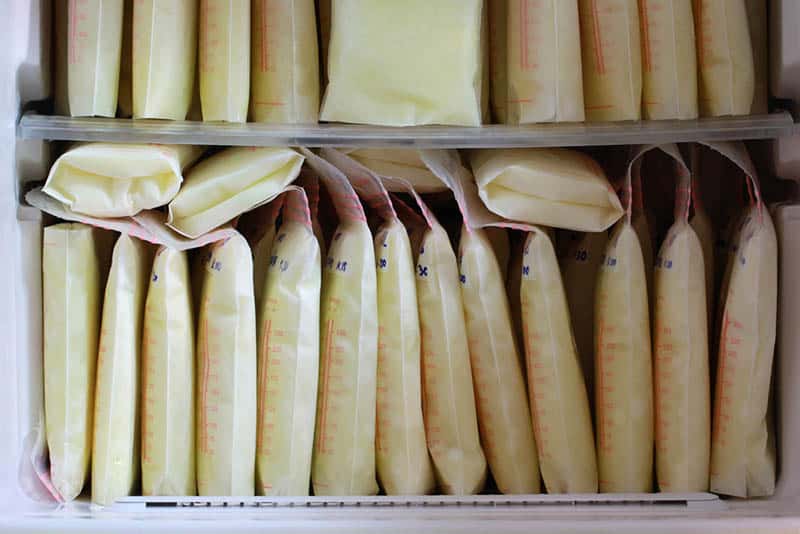 When you start storing your breast milk, you might find that it takes on a slightly more yellowish hue than normal.

That’s due to the fact that the fat in the milk becomes more apparent when milk is frozen and becomes the more dominant color.

It doesn’t mean that the milk has gone bad or anything, so don’t worry, you’ll find that it’s still usable. 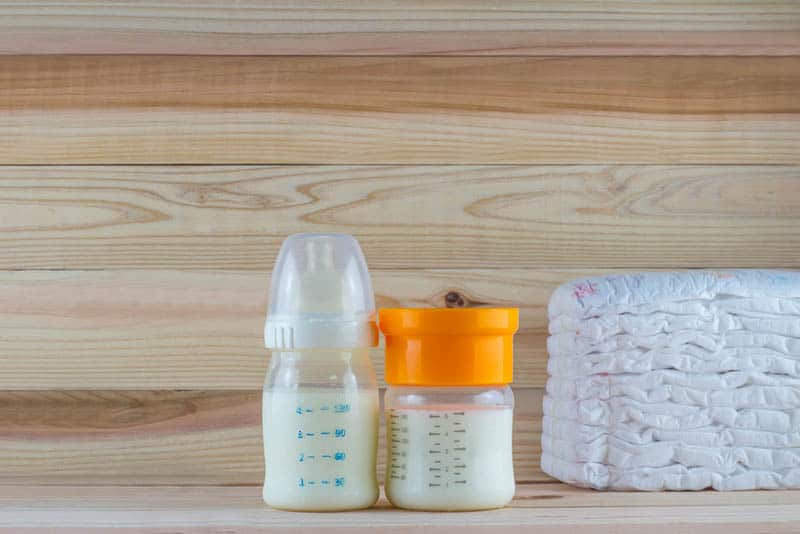 This is the breast milk that you’ll be encountering during the first 2 weeks of postpartum as your milk transitions from colostrum to the mature milk that you’re expected to be producing afterward.

During this period, your overall milk supply is also going to start steadily increasing to help meet your baby’s feeding demands.

What you can expect from your breast milk throughout these first few weeks is that the color will shift from the darker yellow color that the colostrum had, to some lighter shades of yellow up to a completely white one.

It all depends on how well your milk ducts develop during this time. 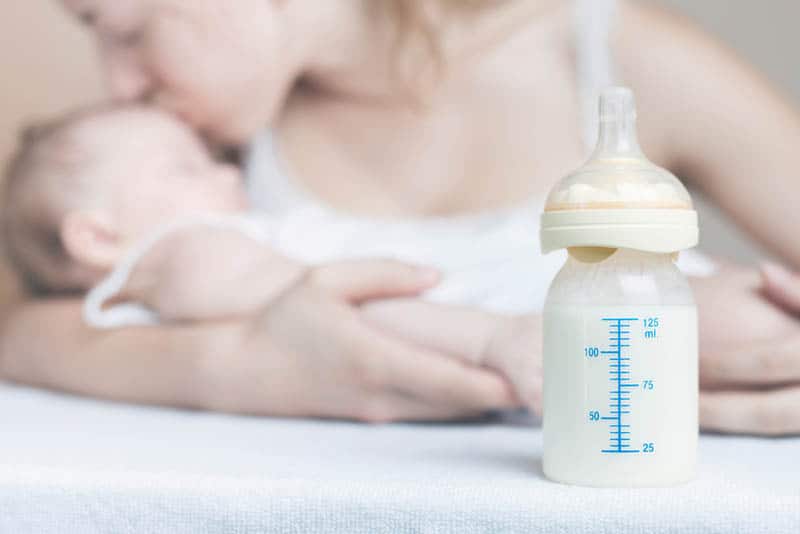 This is what you should be expecting of your milk once the transitioning process has concluded and it too can vary in color.

The variation itself depends on how well-balanced your foremilk and hindmilk are.

When it comes to mature milk, you’ll first start expressing a less creamy and blue sort of milk lacking in fat called foremilk.

Then it will gradually turn to white and then a slight yellow as it gets to the creamier hindmilk that’s richer in fat content.

If, for some reason, you end up only seeing foremilk come out during several breastfeeding and/or pumping sessions, you may have a foremilk/hindmilk imbalance.

Should that happen, contact your lactation consultant (IBCLC) to help advise you on how to fix that issue.

While this is not terribly dangerous, it’ll lead to a fussier baby. He’ll never get sated due to never reaching the hindmilk that’s supposed to come at the end of a feed to stuff his belly. 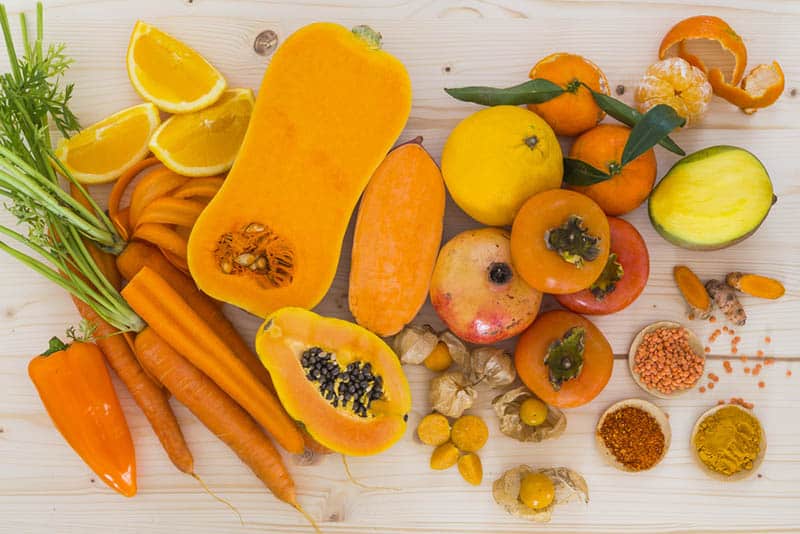 While trying to stay healthy, you might notice that your milk has started taking on a more orange-ish color.

Once again, this is perfectly normal and is but one of the many different colors of breast milk that you might notice during your breastfeeding periods.

This tint comes from the beta-carotene that’s contained in orange healthy food items such as sweet potatoes, pumpkins, carrots, and apricots which may end up changing the color of breast milk a tiny bit. 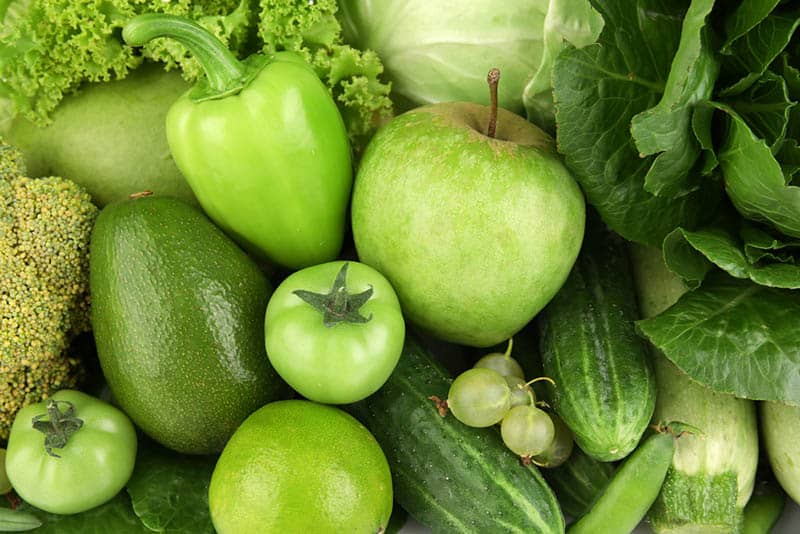 Don’t be shocked if your breast milk changes color to reflect a diet high in these items.

If anything, green breast milk is an indication that you’re sticking to a healthier diet and it won’t harm your child in any way. 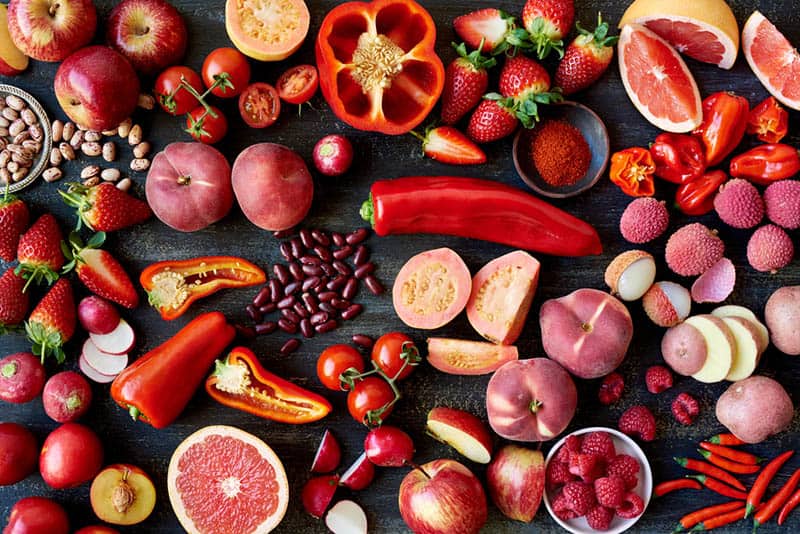 In a similar vein to green foods, red foods are going to end up coloring your breast milk into a slightly pinkish to a more red hue for a couple of days.

At least until the substance that makes it turn red gets flushed out of your system.

Think foods like beets, strawberries, cranberries, and the like, though there could be another reason, one that’s potentially a bit more dangerous and that’s blood. 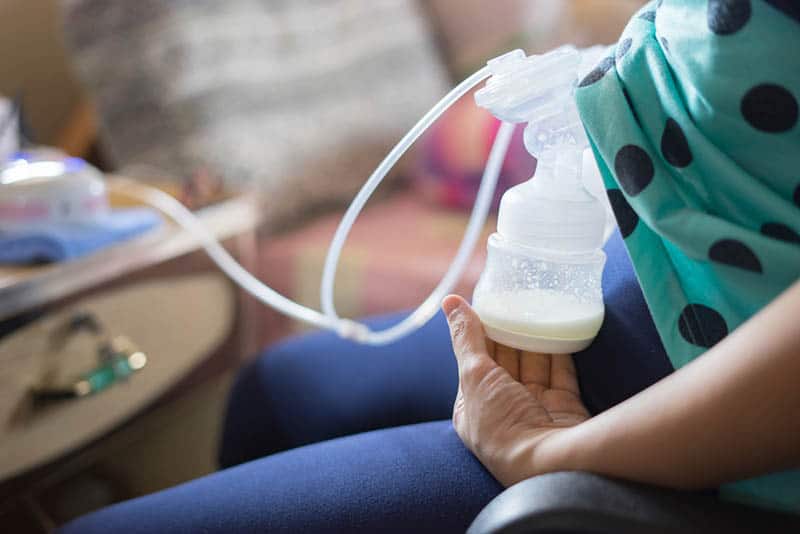 Despite the source of the coloration here, most of the time it’s a rather benign change that will go away in a couple of days much like the rest.

These changes to your breast milk color are usually caused by broken capillaries or cracked nipples that mix a few drops of blood into the milk turning it into a pinkish/reddish color.

Though, if you don’t see the milk change back to the normal color that you’re used to, you should call on your doctor for a check-up.

That’s because blood in your breast milk can also be a sign of clogged milk ducts/mastitis, some other potential breast infections, and even breast cancer so it’s best to get an early detection, just in case. 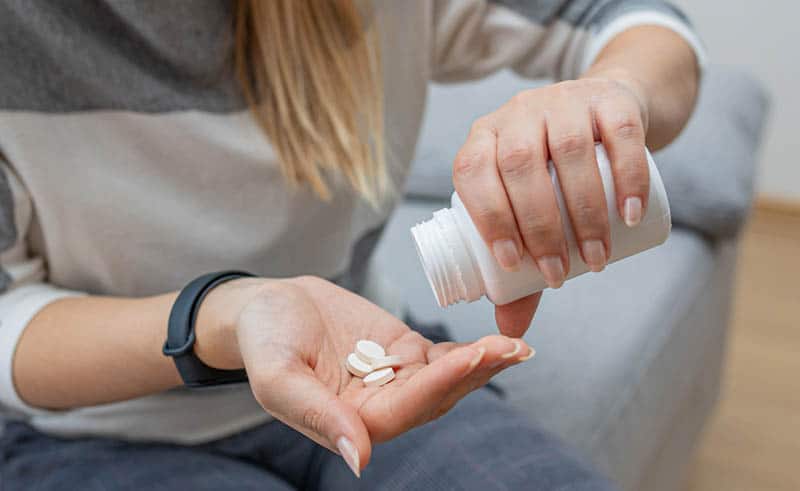 Another, somewhat common change in breast milk color that you might notice is if you’re taking some form of medication.

The most common culprit is the antibiotic known as minocycline or Minocin depending on the label, though it can come from a number of other sources too.

If you start seeing brown or even black breast milk when feeding your child, it might be because you’re using medication that causes these changes in color.

Despite this rather ghastly tint, most of the time it’s really nothing to worry about.

That said, you still might want to check with your doctor, lactation consultant, or health care provider just in case the type of medication that you’re taking is harmful for the baby.

If it turns out that it is, they’ll simply find you a different type of medication that you can take that’s both baby-safe and might not give you such a scare next time. 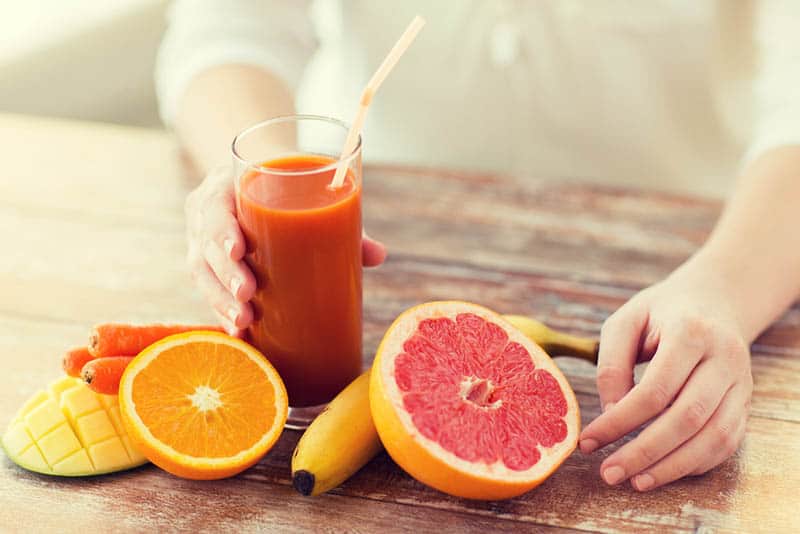 And finally, food dyes come to mind as the main culprit of changes in breast milk color due to their nature.

Whether it’s an orange soda or some sort of blue sports drink that you’ve had, you might see your breast milk temporarily shift to that color for a few breastfeeding sessions but quickly revert back to normal.

Thankfully, most food coloring these days is non-toxic so there’s absolutely nothing to worry about.

I’d argue that it might even make for a more entertaining feed, but you can be the judge of that.

Does Using A Breast Pump Make Any Difference In Breast Milk Color?

It absolutely doesn’t though it might let you spot these changes in the color of your breast milk sooner if you start pumping a bit more.

This allows you to take quicker action to remedy it in case it comes down to some of these more serious color shifts like red/pink or brown/black.

Does Colored Breast Milk Affect The Baby In Any Noticeable Way? 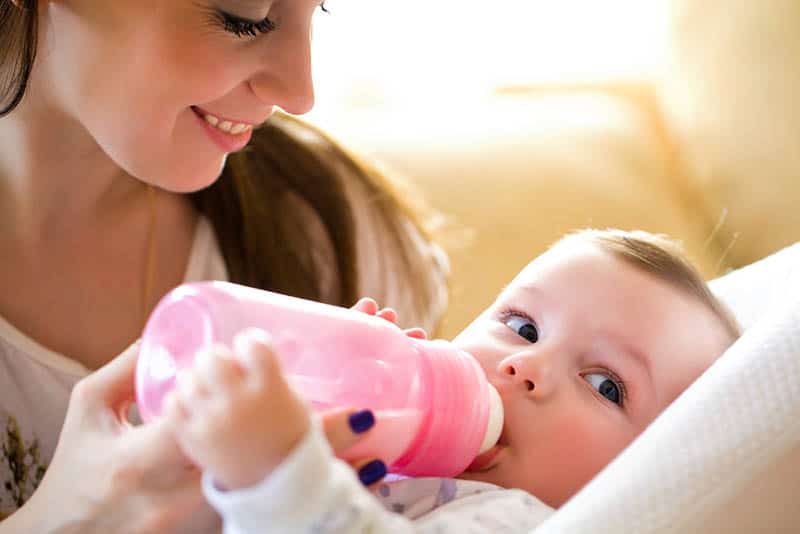 It actually does, but not in any way that should cause concern – although the changes may cause some confusion.

That’s because the coloration might spread to the baby’s stool and you might end up seeing a rainbow of poops too.

While not dangerous on its own, it might raise a false alarm if you see black or red poop.

But, if you know that your breast milk was the same color as the baby’s diaper filling, then you can rest easy knowing that it’s likely that.

Should the coloration of the poop stay the same though or worsen and you see your little one cry more often, it might be time to call the doctor to check if there isn’t some other underlying problem at play here.

Most of the time, the changing of breast milk color shouldn’t be a cause for concern and it doesn’t mean that your breast milk has gone bad.

The normal colors of human milk that you should be seeing would be either blue breast milk, white, or even yellow.

The yellow breast milk color is mostly prevalent in your first milk, also known as the colostrum. It stays that way during the transition into mature milk where it becomes the hindmilk part of it.

The blue breast milk, on the other hand, is the foremilk portion of mature milk that’s richer in electrolytes and a lot lighter in fat content than hindmilk and the white color is the default tint.

The other colors usually occur from various outside factors such as food dyes, and the vitamins and minerals found in healthier foods like green veggies or beta-carotene rich fruits and vegetables.

The colors that might end up causing a bit of concern are red, pink, brown, and black that can appear when some blood mixes with the breast milk or due to taking certain types of medication.

Should this happen, contact your doctor, IBCLC, or registered health care provider to see what your options are and to prevent any possible complications that might arise from this.

Anything else should be safe and you shouldn’t worry too much about it! You have other things that should be on your mind at this time anyway, mammas. This may contain affiliate links. Please see our full disclosure for more info.