Looking for some clean, age-appropriate, yet HILARIOUSLY funny Christmas jokes for kids? Then keep scrolling because we’ve got you covered.

Get ready to wow the crew at your Christmas party with an impeccable sense of humor. These awesome puns will make your kids laugh so hard that they might just drop their Christmas presents.

Some enjoy Christmas decorations, some love waiting for midnight on Christmas Eve, and I love seeing my kids’ faces after serving them my famous mom-jokes. And Christmas is no exception!

Without further ado, here are my favorite Christmas jokes for kids, along with some knock-knock jokes that’ll make even the grown-ups LOL. 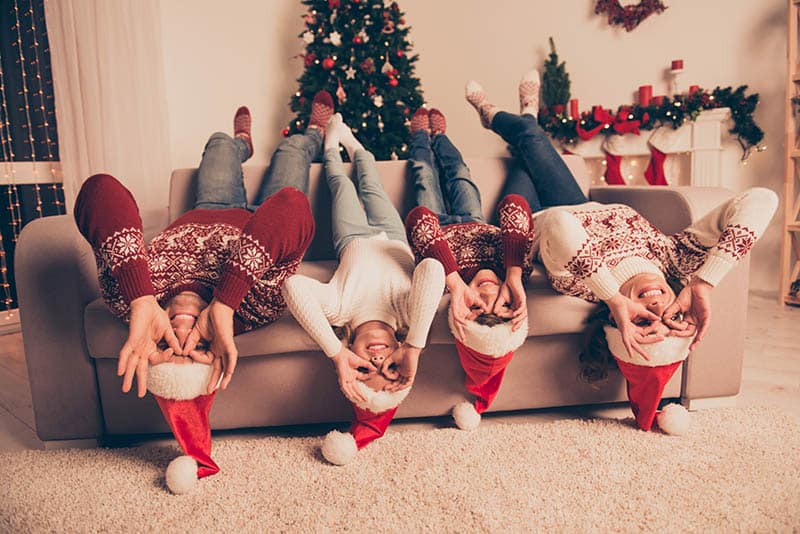 1. What are you giving Mom and Dad for Christmas?

2. Where do polar bears vote?

Murray Christmas, one and all!

Hope you had a nice Christmas!

5. Why was the little girl so cold on Christmas?

6. Where does the snowman keep his money?

Pizza on earth, good will toward men!

8. What do snowmen eat for breakfast?

9. Who delivers Christmas presents to cats?

11. Why did Rudolph get a bad report card?

Because he went down in history.

12. What do monkeys sing at Christmas?

13. What do you call people with a fear of Santa Claus?

14. Why do Dasher and Dancer love coffee?

15. Who delivers Christmas presents to dogs?

17. Which of Santa’s reindeer has bad manners?

18. What does Mrs. Claus say to Santa when there are clouds in the sky?

19. What do you give a train conductor for Christmas?

20. What kind of bug hates Christmas?

21. If a reindeer loses his tail, where can he find a new one?

Your Santa impression needs some work.

23. What’s as big as Santa Claus but weighs nothing?

24.Why couldn’t the Christmas tree stand?

It doesn’t have legs.

25. What do elves learn at school?

26. What do elves use to get to the top floor of Santa’s workshop?

27. What is the best thing to put in the Christmas pie?

Dexter halls with boughs of holly.

29. What kind of music do elves listen to?

He had low elf-esteem.

Orange you glad you were good all year?

33. What did the duck say to the reindeer?

34. How do sheep say Happy Holidays to each other?

35. What do you call an elf wearing ear muffs?

Whatever you want. He can’t hear you anyway. 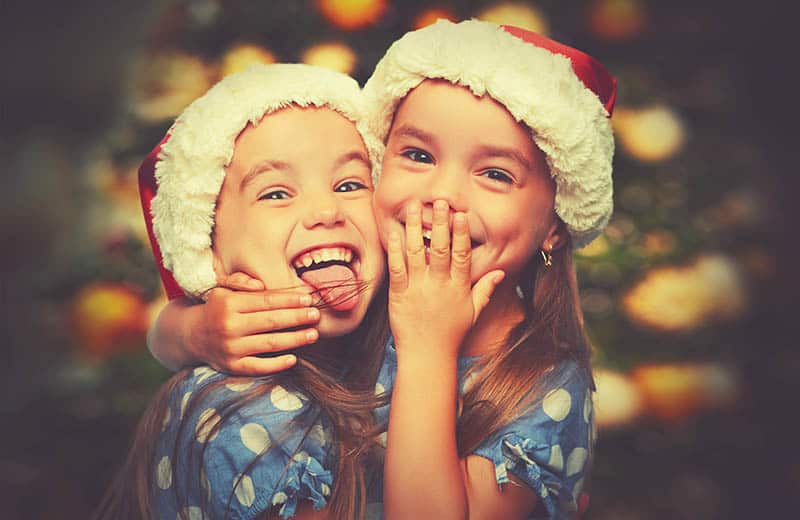 Anna partridge in a pear tree.

Doughnut open these presents until Christmas.

Olive the other reindeer used to laugh and call him names…

Ima dreaming of a white Christmas.

Harry up and open your presents!

Dewey know how long it is until Santa gets here?

Cole is not what I was expecting for Christmas this year!

Hannah partridge in a pear tree.

Yule know when you look out the door.

Howard you like to sing Christmas carols with me?

49. What’s the difference between the Christmas alphabet and the regular alphabet?

The Christmas alphabet has Noel.

I’ll Alex Santa if you’re on his naughty list this year.

52. What falls but never gets hurt?

53. What do you get when Santa plays detective?

54. How do you know Santa Claus is good at karate?

He has a black belt.

55. How much did Santa’s sleigh cost?

Nothing! It was on the house.

56. What do you get if you mix a vampire with a snowman?

57. What do you call a snowman with a six-pack?

58. What snack should you make for the Snowman Holiday Party?

Because of all the wrapping.

60 What’s a good time for Santa to come down the chimney?

61. What does Christmas have to do with a cat lost in the desert?

They both have sandy claws.

They’re into all the wrapping.

63.  One night a Viking named Rudolph the Red was looking out the window when he said, “It’s going to rain.”

His wife asked, “How do you know?”

64. What is every parent’s favorite Christmas carol?

65. What is a bird’s favorite Christmas story?

The Finch Who Stole Christmas.

66. Why are Christmas trees so fond of the past?

Because the present’s beneath them.

67. What does a grumpy sheep say at Christmas?

68. What does a Gingerbread man make his bed with?

69. Did you know Santa had only eight reindeer last Christmas?

70. What do snowmen like to do on the weekend?

71. What has a jolly laugh, brings you presents, and scratches up your furniture?

72. What do snowmen eat for breakfast? 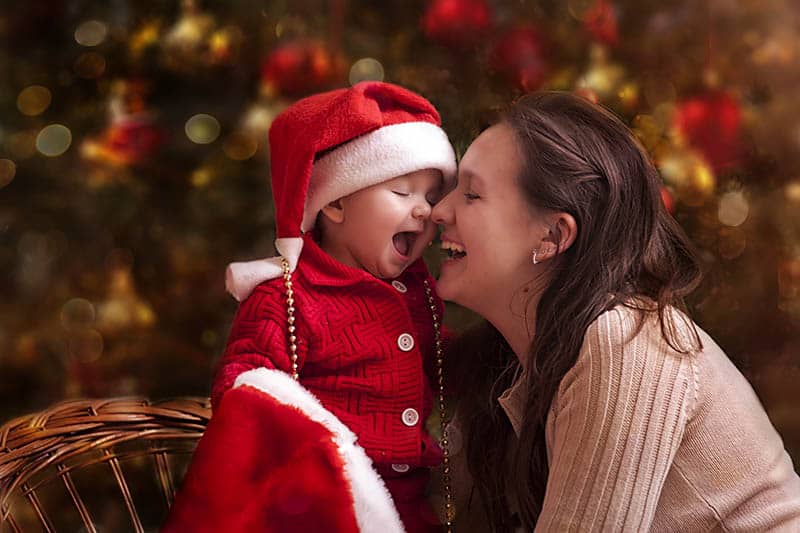 73. Moe: What are you going to give your little brother for Christmas this year?

Joe: I haven’t decided yet.

Moe: What did you give him last year?

75. What do road crews use at the North Pole?

76. What do you call Santa Claus if he goes down a lit chimney?

77. What nationality is Santa Claus?

Santa: Olive the other reindeer.

79. What does Santa say at the start of a race?

80. What does Santa Claus do in his garden?

82. What’s the difference between Santa’s reindeer and a knight?

One slays the dragon, and the other’s draggin’ the sleigh.

83. What do ﬁsh sing during winter?

84. What do you get when you cross a snowman and a dog?

85. When asked about his job, Frosty always replies, “There’s no business like snow business.”

86. Darth Vader: I know what you’re getting for Christmas.

Luke: How do you know?

Darth Vader: I can feel your presents.

87. Warped Wiseman wonders: “Does Santa Claus refer to his elves as ‘subordinate clauses’?”

88. What is red, white, and blue during the holidays?

89. What is a Christmas tree’s favorite candy?

90. What do elves do after school?

91. What do you get when you eat Christmas ornaments?

92.What falls at the North Pole but never gets injured?

93. Where does mistletoe go to become famous?

94. Who gives Christmas presents to sharks?

95. What did the reindeer say to the football player?

“Your Blitzen days are over!”

96.  What did one snowman say to the other snowman?

Do you smell carrots?

97. Why did Santa plant three gardens?

So he could HO HO HO.

98. What comes at the end of Christmas Day?

99. What did the judge say to the angry advent calendar?

Your days are numbered…

101. What did the pepper say on its holiday card?

102. What should you sing at a snowman’s birthday party?

A broken drum – you just can’t beat it.

104. What is the best Christmas song to sing to your pet rock?

Rocking Around the Christmas Tree.

107. What do you call Santa when he stops moving?

108. What do you get if you cross an iPad with a Christmas tree?

The Beauty Of Holiday Jokes

Do you know the best thing about these hilarious Christmas jokes for kids? They are perfectly grown-up friendly as well!

So if you’ve got friends, family members, or co-workers who enjoy a cheesy pun-tastic holiday joke as much as you do, these will definitely do the trick.

Don’t take life too seriously and laugh whenever you get a chance. It truly makes the days more fun and Christmas time more magical.

READ NEXT: 21 Fun and Random Holidays to Celebrate with Kids this Winter 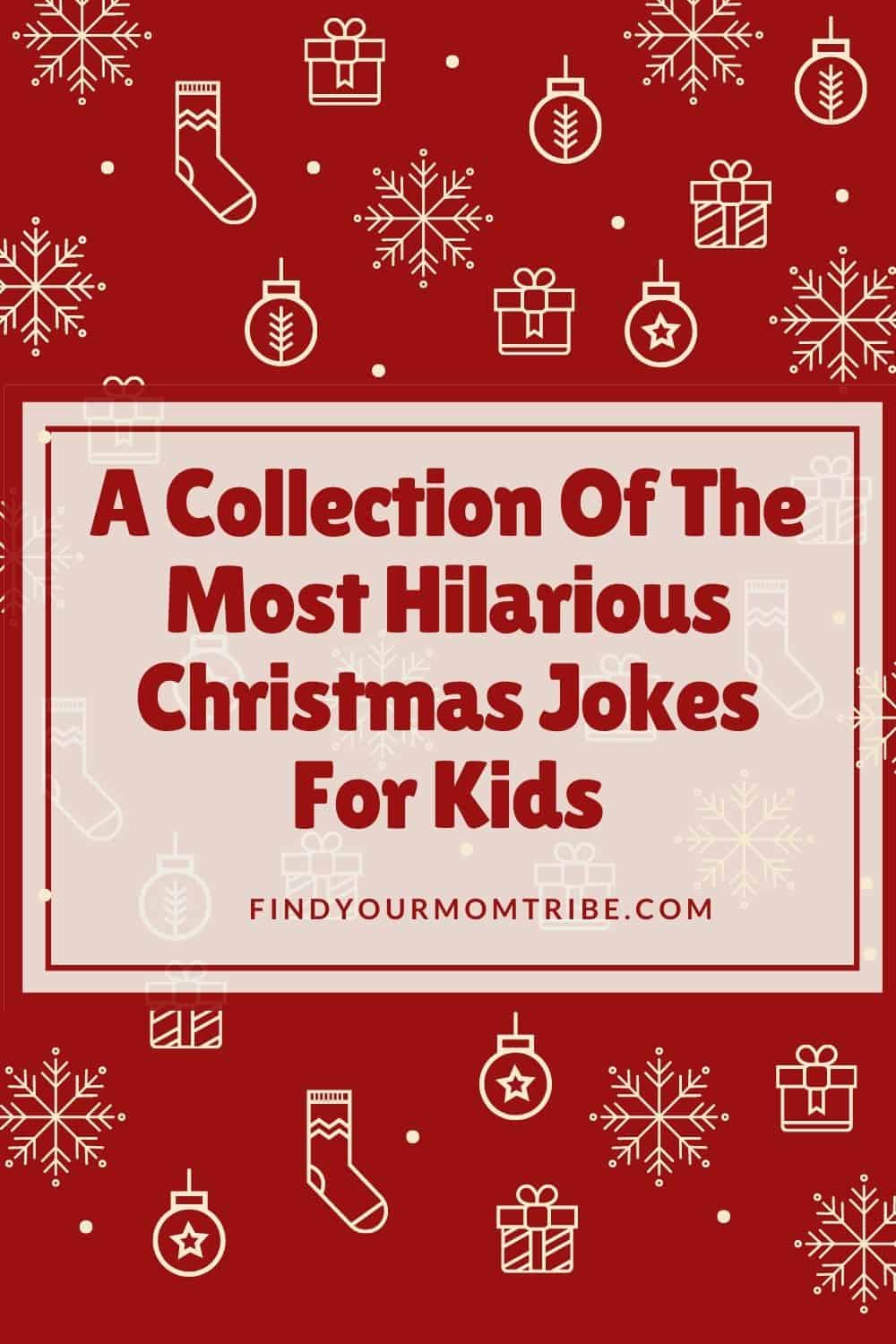