Finding out your baby’s gender is such an exciting pregnancy milestone! However, most moms wait until they’re 20 weeks along to find out.

This is why the Ramzi theory, a new gender detection method, has been making waves among expectant parents.

The Ramzi theory claims it can help you determine the gender of your baby as early as 6 weeks gestation using just an image of your ultrasound and identifying whether the placenta is leaning towards the left or the right side of the uterus.

If it’s leaning towards the right, you will be having a boy, and if it’s towards the left, you’re carrying a girl.

While the original study results showed impressive accuracy rates, the lack of scientific evidence puts the entire method into question.

That’s why we will also go over doctor-approved methods of finding out your baby’s gender as early as possible – and I’ve thrown in a few old wives’ tales for good measure, too!

What is the Ramzi method? 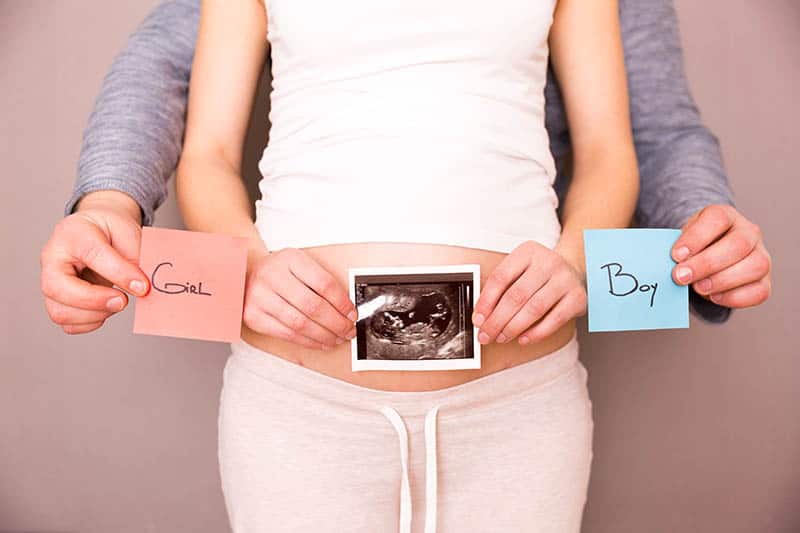 If we take into account the sheer number of old wives’ tales that are aimed at predicting the gender of a baby, it becomes pretty clear that finding out the baby’s sex is a big deal.

Although there are parents who would rather wait until the big day to find out if their precious one is a boy or girl, most parents just can’t wait to see which the baby will be!

If you happen to belong to this group, it’s perfectly understandable – you’re probably ready to start thinking about what the baby’s room will look like and you might even want to start planning your gender reveal party.

The Ramzi theory claims to be able to predict the gender of your baby much earlier than other, more conventional (and scientifically proven) methods.

So, how does it work?

It relies on detecting the positioning of chorionic villi, which form a significant part of the future placenta.

They play an important role in delivering nutrients from the mother’s blood to the developing baby.

Compared to other methods of gender prediction, you don’t need a doctor or a medical professional to find out the sex of your baby using the Ramzi method.

In fact, all you need is a pregnancy ultrasound scan (this can be done even with your first ultrasound scan and as early as 6 weeks into your pregnancy) where you will need to determine the positioning of your placenta.

While this does sound simple enough, finding the location of the placenta on a grainy and blurry ultrasound image can be tough if you don’t know what to look for.

That’s why it’s best to ask your ultrasound technician to point it out to you on the sonogram so that it’s easier for you to find later.

You can also look up Ramzi theory examples on YouTube where there are plenty of tutorials to help you.

Remember that if you had a transabdominal ultrasound that the ultrasound picture will be mirrored, so what looks to be the left in the image will actually be the right.

But applying the Ramzi theory to a transvaginal scan is easier since the image won’t be mirrored.

One of the most important things to keep in mind if you’d like to use the Ramzi theory to see if you’re having a baby boy or girl is that you must have an early ultrasound before you’re 9 weeks pregnant.

Does it actually work? 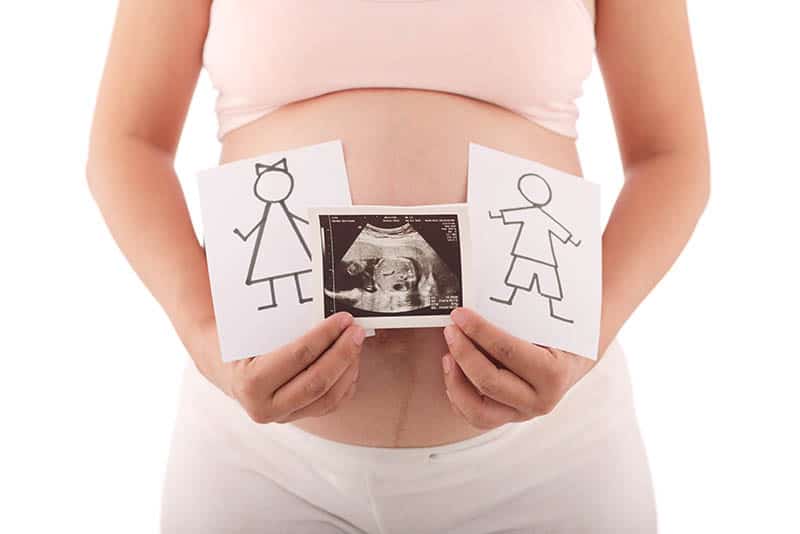 Even though the idea of using a gender prediction method so early into your pregnancy seems amazing, it’s key to know where this method came from, who developed it, and whether it’s reliable at all.

The method was developed by Dr. Saam Ramzi Ismail to determine whether there was a connection between the position of the chorionic villi and the sex of the baby and whether this can be used as an early fetal gender detection method.

The results he got as part of his study determined that Ramzi’s method made correct predictions in 97 percent of the cases with a small variation between the boys and girls category.

These results sound very promising and I’m sure that any pregnant woman would probably jump at the opportunity to use this method of gender determination.

The problem is that this study was never published in a scientific journal, where it would have gone through a rigorous peer-review process during which other professionals in this field would evaluate this method and its efficacy.

Instead, the study was published online, on the obgyn.net website. This means that there is really no scientific evidence to prove that it works.

What’s more, some experts in this field say that a 6-week scan is simply too soon to tell, considering the organs that determine the sex of the baby only begin to develop 2 weeks prior.

Other experts claim that using the placenta as a baby gender predictor is misleading as there are placentas that neither lean towards the right nor the left.

Finally, it should be taken into account that Dr. Ismail is not a medical doctor but has a master’s in ultrasounds and a Ph.D. in Public Health, so his advice might vary from the one offered by an obstetrician.

In any case, using the Ramzi theory as an early gender prediction method won’t hurt and could even be fun – just don’t be too disappointed if the results turn out to be different than you expected. 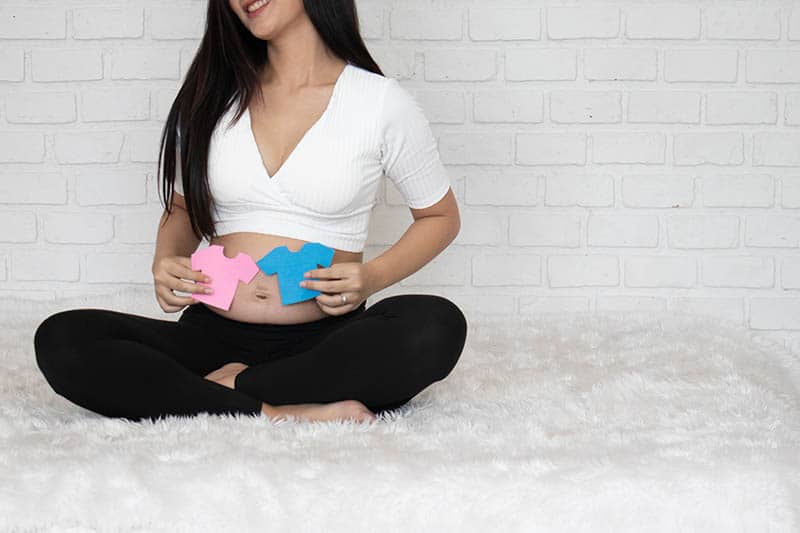 When it comes to early baby gender prediction methods, there are a number of tried and tested ways to find out the baby’s gender:

Generally speaking, most moms-to-be find out if they’re carrying a baby girl or boy much later into their pregnancy when they have their ultrasound between 18 and 22 weeks.

This is also the time when you will start feeling your baby’s kicks and movements – so exciting!

Have fun with old wives’ tales 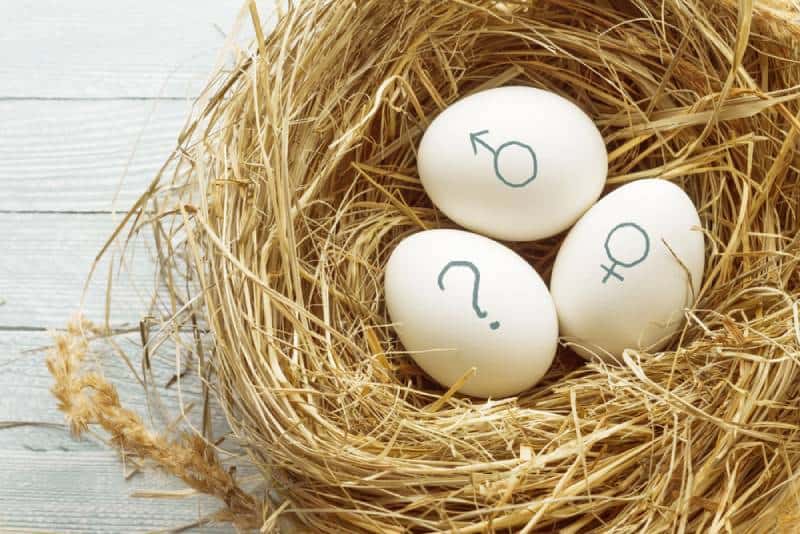 We all know that old wives’ tales are more often incorrect than correct, but that doesn’t mean they can’t be tons of fun!

You can take note of all of your pregnancy symptoms and see whether any of them could indicate a boy or girl.

Even if they turn out to be wrong, it can be a really nice way to pass time!

So, here are some totally unscientific old wives’ tales to predict your baby’s gender:

The Ramzi theory does sound exciting!

And the prospect of knowing the gender of your baby so early on appeals to many parents, but it’s important to know that it lacks scientific evidence to prove its effectiveness, so don’t be let down if it turns out not to be true.

Whether you decide to give the Ramzi theory a chance is up to you – after all, it won’t hurt to try!

But for the best and most accurate results, you should talk to your doctor about some of the medical gender detection methods I’ve mentioned.

Maybe you will even decide to wait until you’re 20 weeks along to find out!

Once you know for certain that you’re having a boy or a girl, you can throw yourself into doing whatever is next on your baby to-do list, whether it’s decorating the nursery or shopping for onesies and toys. 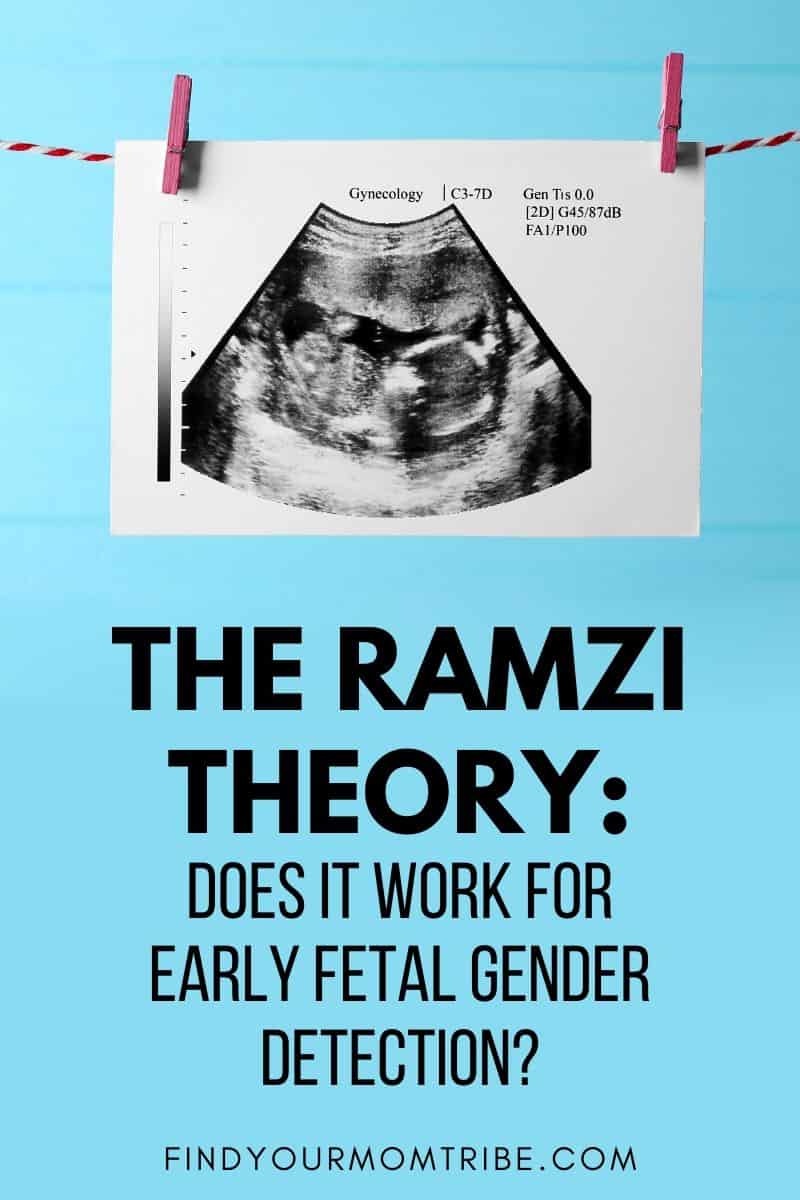