As parents, we must always be mindful of anything abnormal with our children, and this is especially true for new parents. An excellent example of this is when a baby spits up in sleep.

Seeing your baby spit up in sleep is rather common, but is it dangerous?

This depends mostly on the position you put your child in, but most of the time your baby’s instincts should kick in and keep him safe.

By this, I mean that there are certain sleeping positions likely to trigger your little one’s natural instinct to turn his head to the side to prevent any airway blockages which might lead to Sudden Infant Death Syndrome (SIDS).

If the baby is on his back, he’ll also have an easier time either swallowing his regurgitated stomach contents or coughing them out.

Putting your baby to sleep on his back might not seem like a big deal, but it’s actually a very crucial step that may end up saving his life.

This is just one of many other tricks that can reduce the chances of your child spitting up while laying down and potentially choking.

What To Do When Your Baby Spits Up In Sleep

If you have noticed your baby spitting up when sleeping it can be a real worry!

That’s why I have gathered these excellent tips and safe sleep guidelines to give you some peace of mind.

1. Put the baby to sleep on his back 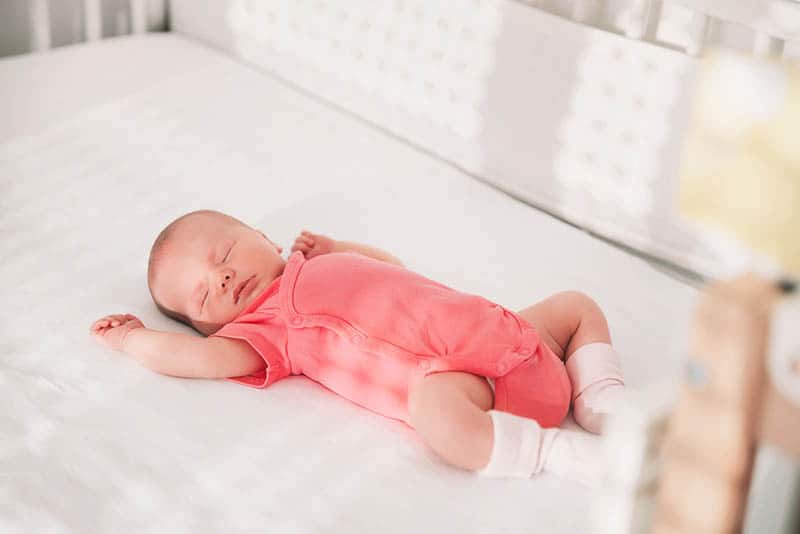 Putting your baby to sleep on his back is the most important thing you can do to minimize the risks caused by spitting up while sleeping.

If the baby spits up, he’ll just tilt his head instinctively and let the spit up travel away from him, cough it away, or swallow it.

Your baby will still wake up and cry, but he won’t be in any danger at the very least.

Young babies of just a few months of age lack the ability to flip themselves over if they’re stuck with their faces in the mattress, which greatly increases the risk of SIDS and choking in general.

However, even though back sleeping might seem counter-intuitive considering the way gravity works, it is certainly the right way to go.

In fact, whether your little one is spitting up when sleeping or not, he should be placed on his back in his crib.

Also make sure that there are no toys or other items in the crib with the baby, as they may increase the potential risk of SIDS.

2. Keep the baby in an upright position when feeding 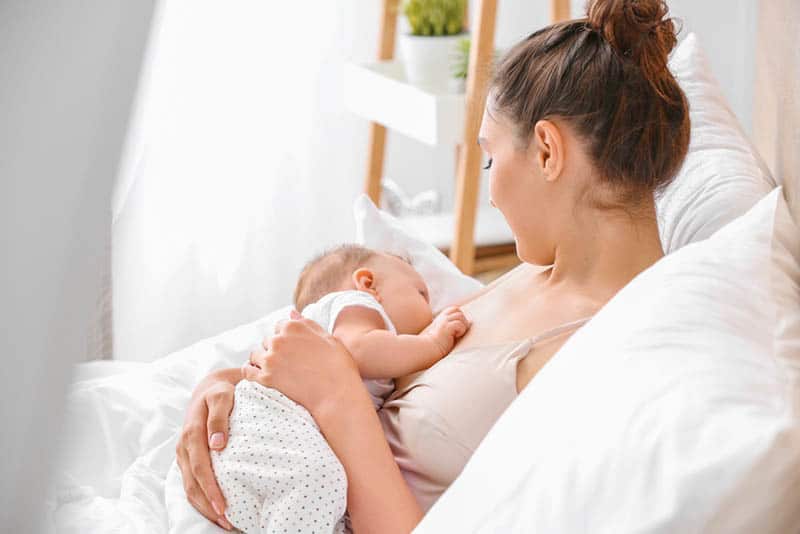 Feeding your baby when he’s lying down can result in digestive discomfort and increase the potential of gagging and choking on breast milk or baby formula.

This in turn leads to an increased chance of acid reflux.

Keep the baby upright when either breastfeeding or formula feeding to avoid this.

It’s also important to leave him in the same position for at least 20-30 minutes after a feed to allow all of the food to pass through his digestive system normally.

Wait for a while before engaging in playtime after you burp him, as excessive activity after a feed can cause tummy trouble. 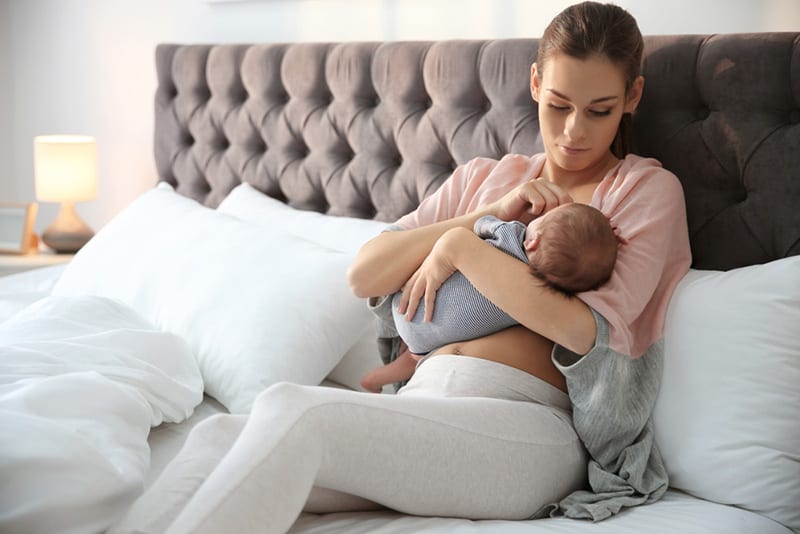 It can cause bloating and potentially weaken the esophageal sphincter, leading to more frequent instances of your baby spitting up.

In order to keep your baby a happy spitter and avoid giving him tummy issues, space your feeds out over several small portions rather than one big one. 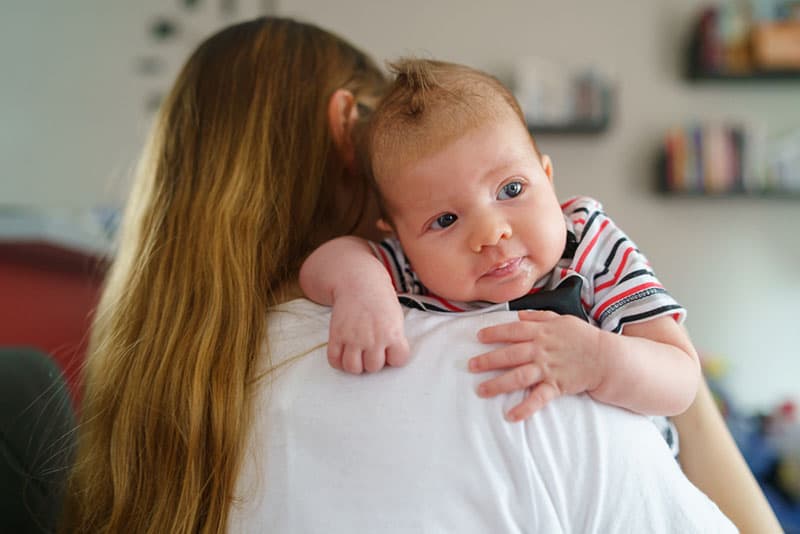 When I had my baby, one of the first things I was told by our pediatrician was to burp my little one frequently.

In order to have a happy and healthy baby, at least as far as digestive health is concerned, make sure to burp him after every meal to help settle the contents of his stomach and prevent gas from building up.

Don’t forget to have a burp cloth handy during your child’s first year to avoid ruining your clothes with spit up.

5. If you’re breastfeeding, examine your own diet 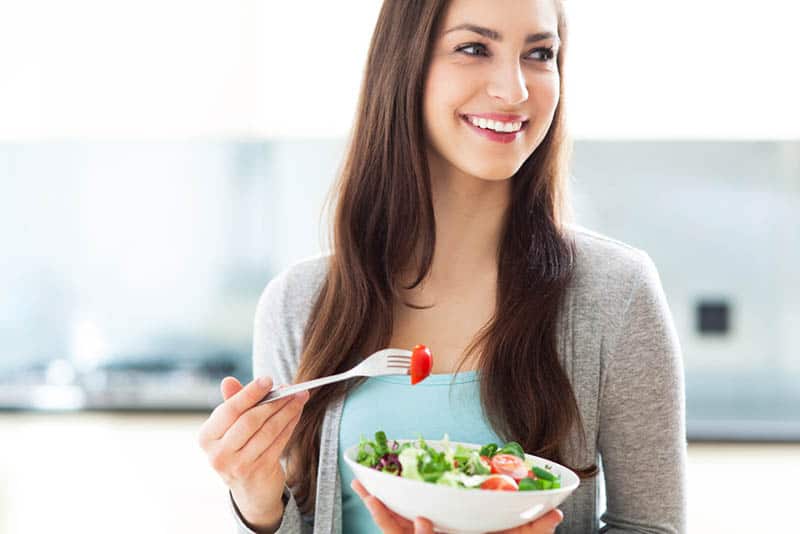 If you find that your baby’s daytime or nighttime spit ups aren’t improving, and you’re also breastfeeding, you should look into your diet to see whether any foods you’re consuming are irritating your baby.

There might be something you’re eating that’s transferring from your breast milk during breastfeeding causing this abdominal upset so your baby spits up in sleep.

Many new parents get scared by the idea of babies spitting up, but in reality, it’s a completely normal phenomenon in infants under one year old.

The root cause is the baby’s underdeveloped digestive system, in particular the sphincter at the end of the esophagus, which acts as a barrier between the stomach and the esophagus.

This muscle is usually weak in newborns, which can lead to the partially digested contents of the stomach coming back up the esophagus.

This is also known as gastroesophageal reflux (GER) and is also a common annoyance in children until their first birthday, after which it clears itself up naturally.

In rare cases, it turns into a more serious version of the condition called gastroesophageal reflux disease (GERD) and you’ll need to take your baby to the doctor for examination and treatment in this case.

Is Spitting Up The Same As Vomiting? 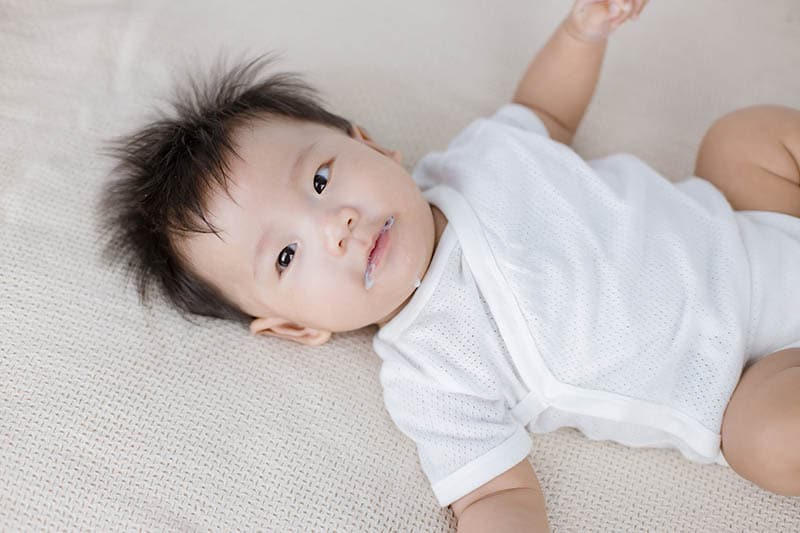 Spitting up and vomiting may sound similar, but they have very distinct differences.

While both involve the regurgitation of content from the baby’s stomach, spitting up is a lot milder in comparison to vomiting.

Spitting up shouldn’t expel a lot of stomach content, and the baby might also pass gas when you’re burping him, but vomiting is a lot more forceful.

The latter is usually a sign of something more serious, so if you see it happening it would be wise to contact your child’s pediatrician or any other qualified healthcare provider on the matter to consult them about how best to deal with it.

Can Spitting Up Be Dangerous? 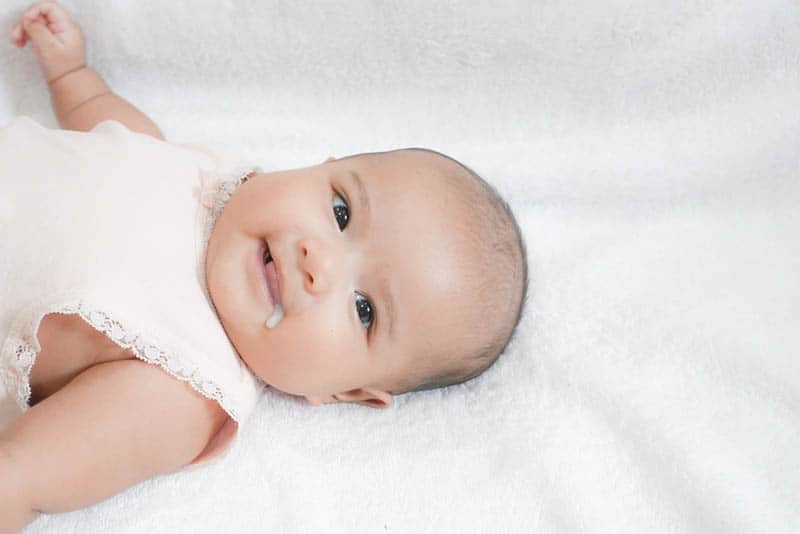 Outside of the time where the baby spits up in sleep and the baby’s head is facing downward, spitting up is rarely dangerous.

It could be a symptom of a more serious medical issue though.

Here are some of the most important symptoms you should be on the lookout for:

• The spit up is yellow or green in color

• Loss of appetite or outright refusal to feed

• Stool isn’t as wet as it should be

If you notice any of these symptoms, it’s probably time to pay a visit to a pediatric gastroenterology specialist to have your baby checked up.

This way the problem will be diagnosed and can then be safely treated and eliminated before turning into a bigger complication.

How To Reduce The Risk Of SIDS 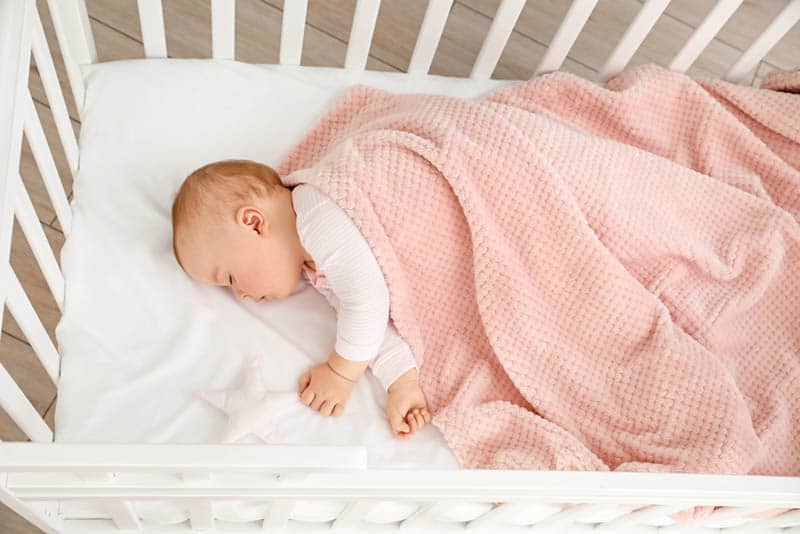 One of the biggest concerns of every parent whose infant spits up while sleeping is SIDS.

Thankfully, babies instinctively know what to do if they spit up while laying down, which is why it’s so important to follow safe sleep guidelines.

As well as making sure your infant is sleeping in a safe environment, you can also reduce the risk of SIDS by introducing tummy time.

It’s a really good exercise to perform when the baby is awake, which will develop his abdominal muscles and help him learn how to roll over.

All you have to do is place your baby on his stomach for a few minutes.

If your little one doesn’t like it you can use toys to engage him or lay on the floor alongside him to make tummy time more interesting. 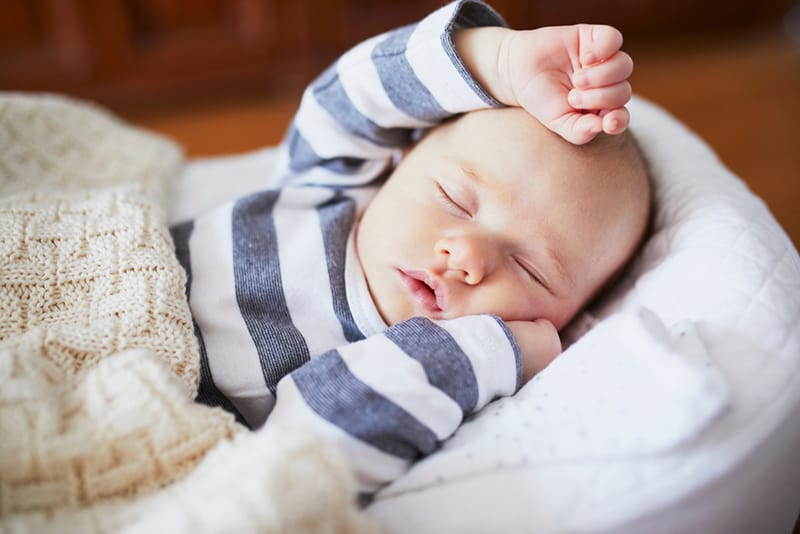 Baby sleep is crucial to a child’s development, so it’s only natural that you’d want to do everything in your power to make sure your little one gets enough rest. However, if the baby spits up in sleep, this can become difficult.

Spitting up is a result of a variety of factors, but can be easily remedied by following the guidelines listed above and practicing safe sleep.

Most importantly, there’s no need to panic as long as your little one is sleeping on his back in his crib.

If he spits up while sleeping, he’ll either swallow or cough it up to clear his airways.

If you’d like to find out more about safe sleep guidelines, I advise you to visit the American Academy of Pediatrics (AAP) website and talk to your baby’s doctor about any concerns you may have.

Until next time, mammas! 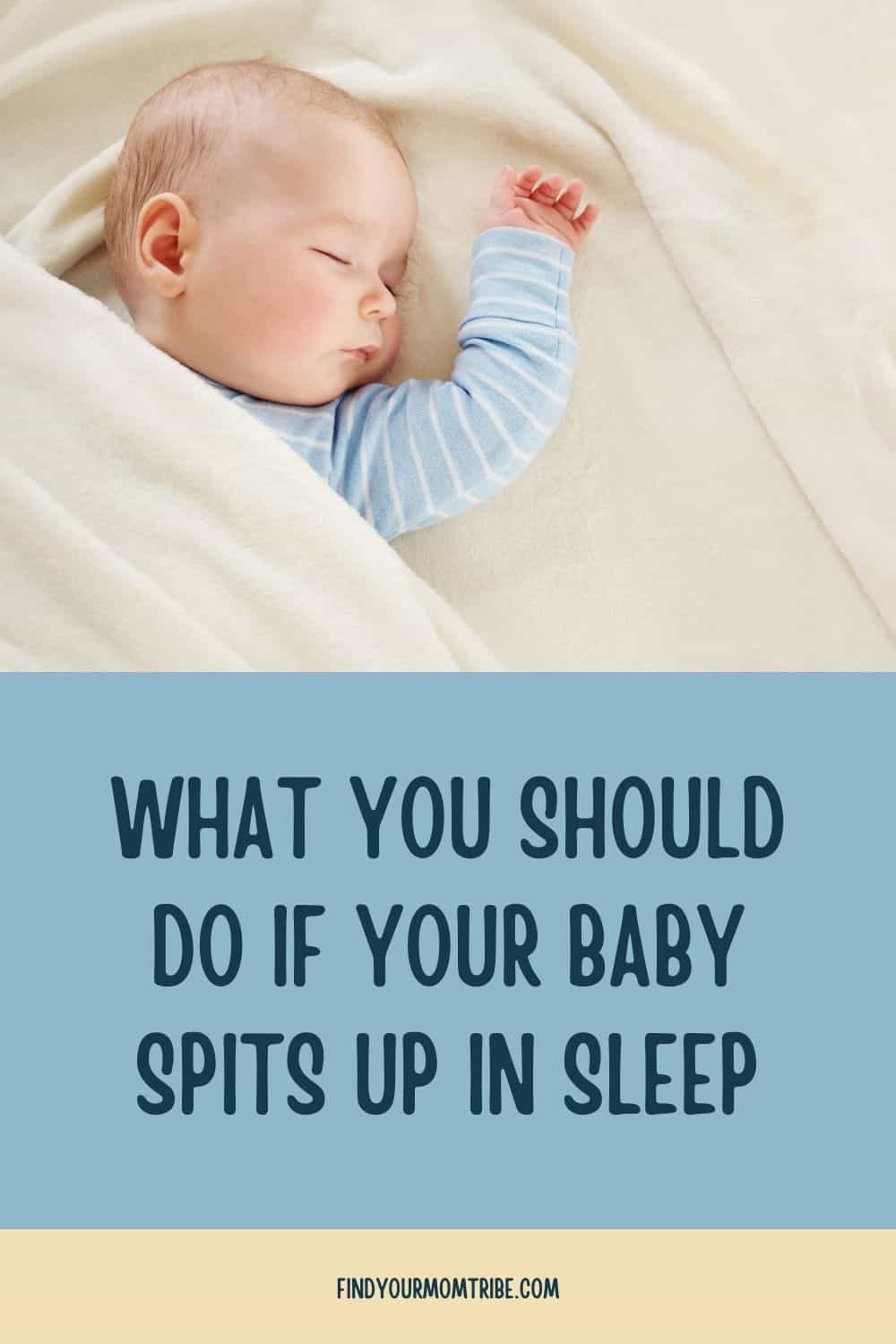