During pregnancy we often have many cravings, but not all of them are safe.

The short answer to: can pregnant women eat ceviche? Is NO!

This is due to one very specific and obvious reason, ceviche is made using raw seafood.

Any uncooked meat, and raw fish especially, is a common cause of food poisoning and is especially dangerous in the case of pregnant women, which can cause problems with all your regular bodily functions and leave you with some nasty side effects.

The most common type of food poisoning with seafood is listeria, otherwise known as listeriosis.

The most serious cases of listeria can leave you severely dehydrated and put the life of your child at risk.

In fact, pregnant women are a lot more likely to contract listeria.

This is why doctors recommend avoiding eating fish and other seafood raw like sashimi, raw shellfish, raw oysters, and the like.

There are some others you should avoid for different reasons, but there’ll be more on that later. 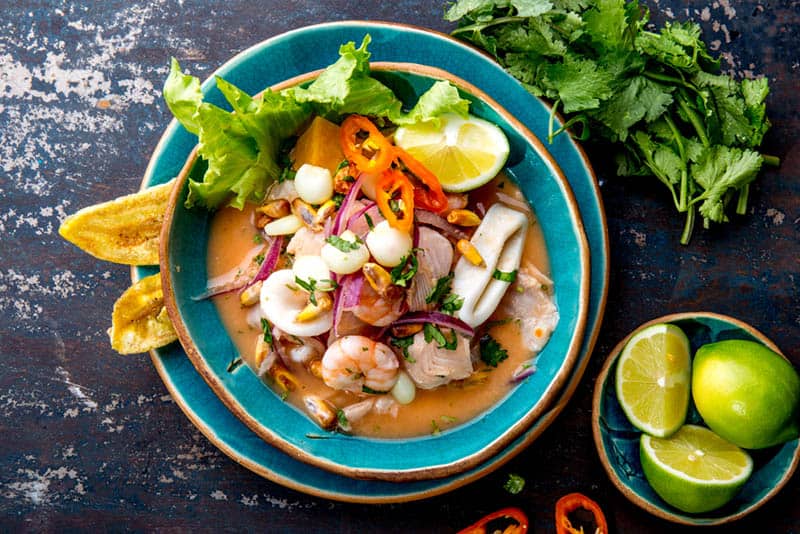 Before we get into the nitty-gritty, it’s worth explaining exactly what kind of dish ceviche is.

It’s a traditional Latin American seafood dish that originates from the country of Peru and is most commonly served as an appetizer before meals, often alongside things like sweet potatoes and avocados.

It consists of raw fish marinated in different types of citrus juice, with lime juice and lemon juice marinades the most common.

It’s then seasoned with all sorts of different spices native to the region, alongside other condiments.

The ones you find most often are chili peppers, salt, vinegar, cilantro, and chopped onions.

Eating ceviche should be done quickly after preparation to maintain freshness and minimize the risk of potential food poisoning, like salmonella, which is more likely as ceviche is served raw. 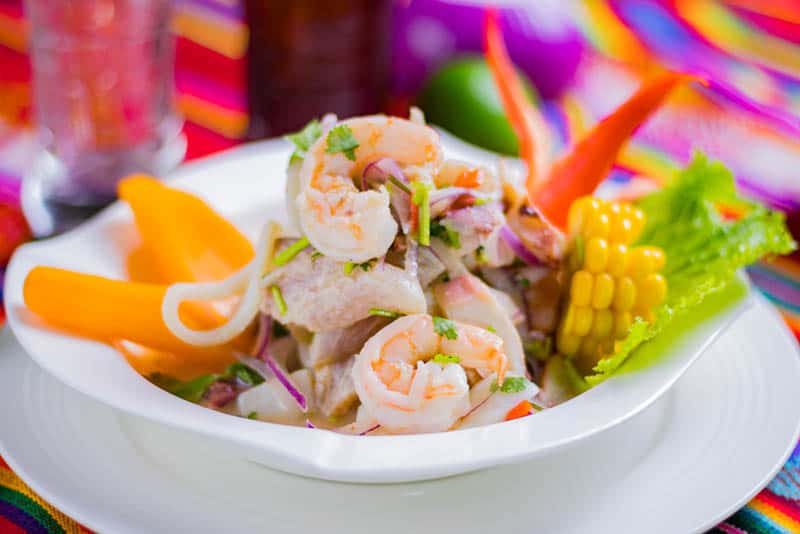 As I mentioned earlier, ceviche should be avoided during pregnancy, as the risk is too great no matter how quickly you eat it after preparation.

The body of a pregnant woman simply processes things differently, and contracting listeria or salmonella is definitely not something you want to experience.

Listeria is the more dangerous of the two pathogens.

It’s likely to cause a lot of serious problems not only for you, but the child growing inside your uterus.

In order to recognize whether or not you’ve contracted listeriosis, it’s worth looking out for some telltale signs.

Some of the most common symptoms include:

While it does share similar symptoms with several other diseases and medical conditions, it’s worth getting a check-up at the doctor’s if you suspect something is wrong.

Even if you ate raw fish and seafood dishes like ceviche before your pregnancy and felt fine, you could still experience a listeria infection.

The parasite can linger in your digestive system for as long as 2 months, which could catch you off guard in your first trimester.

Listeria poses similar dangers as a standard case of food poisoning, with dehydration being the main concern.

However, there are additional risks for pregnant women, mainly because of the involuntary muscular contractions made by the body in order to try and eject the foreign entity inside it.

These contractions can potentially cause you to go into early labor, or worse, lead to a miscarriage or stillbirth.

Risks for the baby 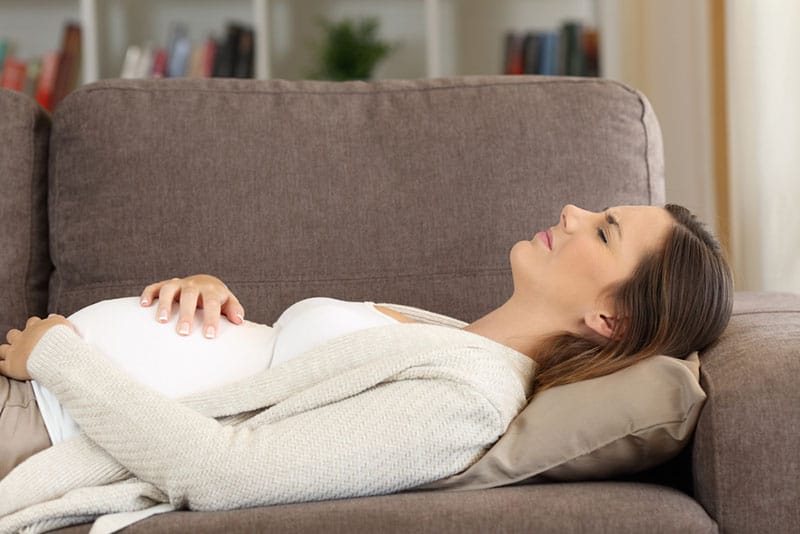 If that didn’t paint a bad enough picture of what can happen as a result of eating raw fish during pregnancy, you should also know that the parasite can transfer over to your child too.

This will end up causing even worse problems for the baby because of brain and blood infections, which can both have lasting and severe consequences, including:

As you can tell from the issues mentioned above, there’s a clear reason the FDA (Food and Drug Administration) has deemed uncooked seafood to be a food safety risk.

For those unaware of what dishes fall under this category, they are as follows:

And any variations on these dishes.

Are There Any Other Fish You Should Be Wary Of? 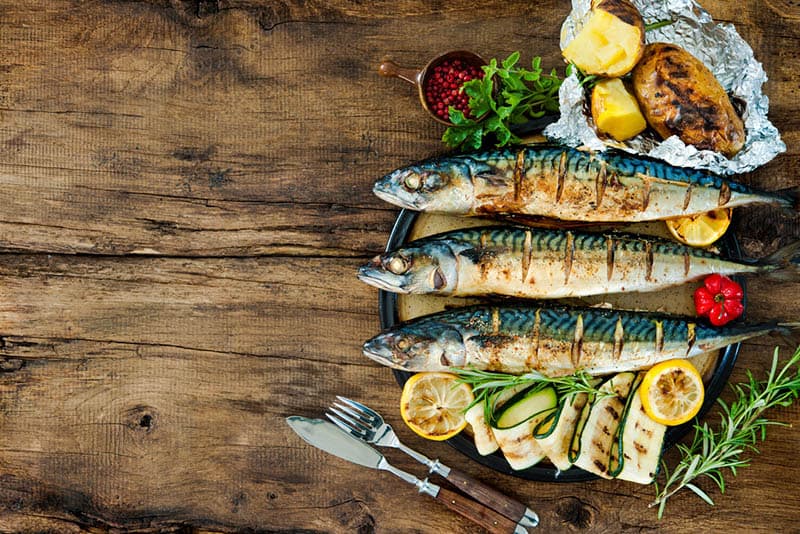 As well as uncooked seafood, there’s another health risk swimming in the oceans, and that’s mercury.

It’s found in small and relatively harmless doses in all fish.

However, some of the larger ones have a much higher concentration of it, which can be detrimental to the health of both you and your child.

Some of the most common types of so-called mercury fish are:

In addition to several others.

Should I Just Avoid Fish Altogether Then? 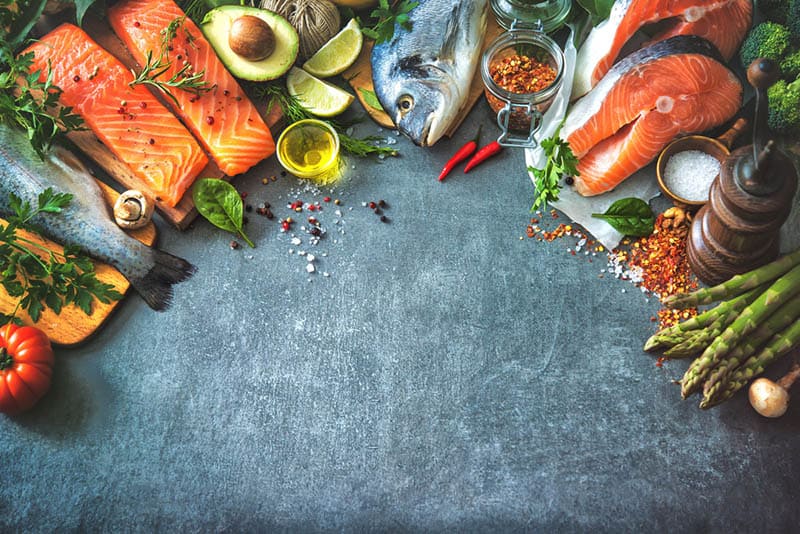 Eating fish during pregnancy shouldn’t be seen as a bad thing, it’s just that certain types should be avoided.

So the question shouldn’t really be: can pregnant women eat ceviche? But rather: what type of fish dishes are safe to eat during pregnancy?

Fish contain some very healthy nutrients which benefit a pregnant woman’s body and help both her and her child stay healthy.

They’re the best natural source of omega-3 fatty acids and also contain other vitamins and minerals that benefit the body, like:

There are also several others, which will not only be beneficial during pregnancy, but for breastfeeding too, as they help make your breast milk more nutritious.

However, always be sure that you properly cook the fish and avoid eating it raw, as the heat helps kill bacteria off and makes it safe for consumption.

Fish should always be cooked at a temperature of at least 145°F to avoid the risk of contracting listeria.

Which Fish Are Safe To Eat? 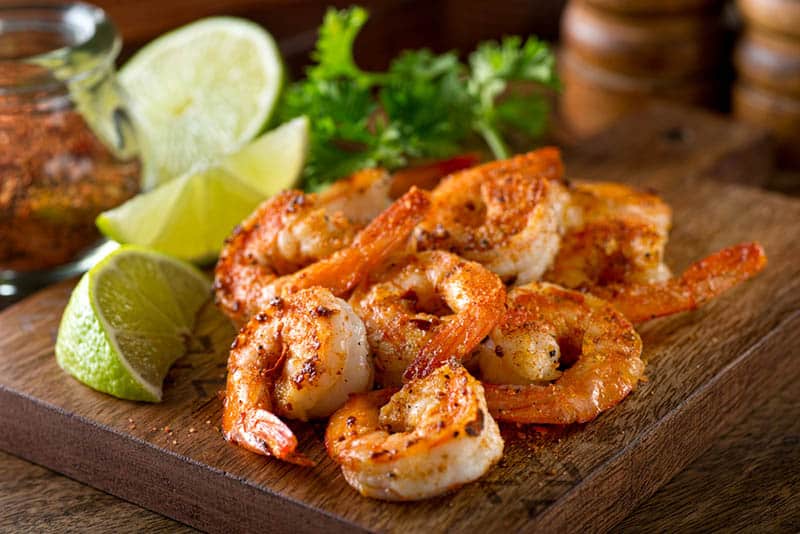 The answer to this question mostly comes down to the way you prepare the fish.

As long as it’s cooked at the proper temperature, you should be fine.

That said, some fish are healthier than others as well as being safe for pregnant women.

​Their suggested daily amount does vary, so I’ve split them off into two groups: 6 ounce and 12 ounce.

The 6 ounce fish you can eat are:

As for the 12 ouncers, they’re as follows:

Make sure to look up some good recipes online, as well as methods of cleaning and preparation, to make sure they’re completely safe to eat. Seafood can be a really tricky beast to tackle, after all. 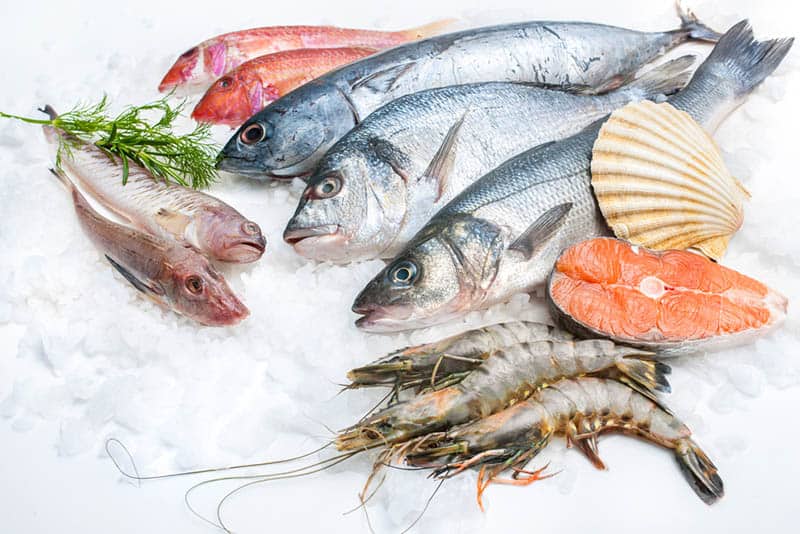 Although fish is one of the healthier proteins, and one with a lot of dish variety, it’s also one of the trickiest to handle in terms of both cooking and storage.

Not only are some of them extremely hard to clean, they also spoil rather quickly, giving them quite a short expiration date.

In order to get the most out of your fish, it’s worth learning how to properly handle it.

First off when preparing fish, is to make sure it’s kept frozen or in a very cold place, unless you’re aiming to serve it right away.

If you’re looking to serve fish the next day, make sure to leave it to thaw slowly in the fridge overnight, and place it in a wide dish so the melting ice doesn’t leak everywhere.

Once that’s done, and all the other preparations for your meal are complete, it’s time to cook it.

Use a meat thermometer

A great tool for cooking fish is a meat thermometer, so you can check whether you’ve hit the desired 145 °F sweet spot to get rid of bacteria.
Don’t let hot fish go cold or cold fish heat up

Once cooking is complete, serve the fish immediately and don’t let it cool down, this will only invite germs again and make the dish more likely to spoil.

The same goes for the other way around, if you’re eating something like canned tuna, you can’t leave it sitting out in the hot sun all day and expect it to still be safe for consumption. 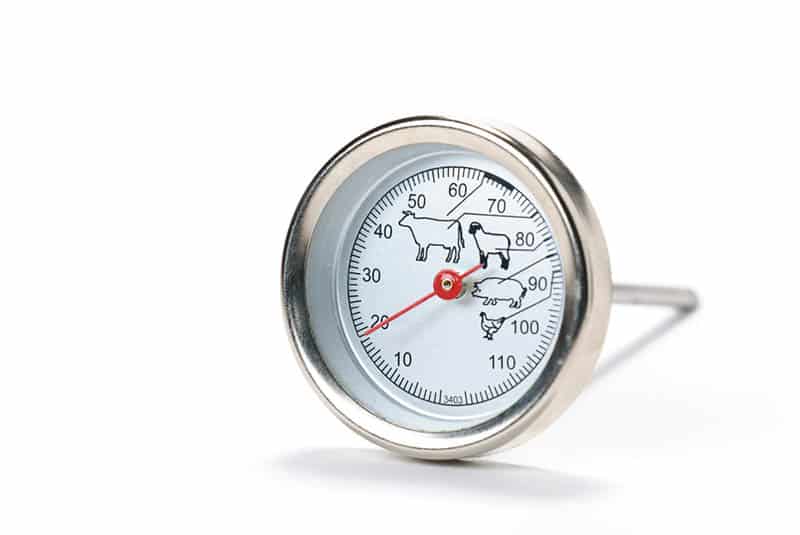 If you’re looking to keep some leftovers, refrigerate the remaining food immediately.

That should help keep it from spoiling a bit longer than it otherwise would have.

Finally, the most obvious piece of advice is to always smell your fish.

If it starts smelling funny or if it reeks of ammonia, get rid of it immediately, as it is guaranteed to be unsafe for consumption.

This is something that should take priority, especially if you’re not the one making the food and it came from somewhere else, like a street food stand, restaurant, or even a family member.

No place is safe unless you can actually see where they keep their fish and how they prepared it.

When Is It Safe To Continue Consuming Raw Fish Again? 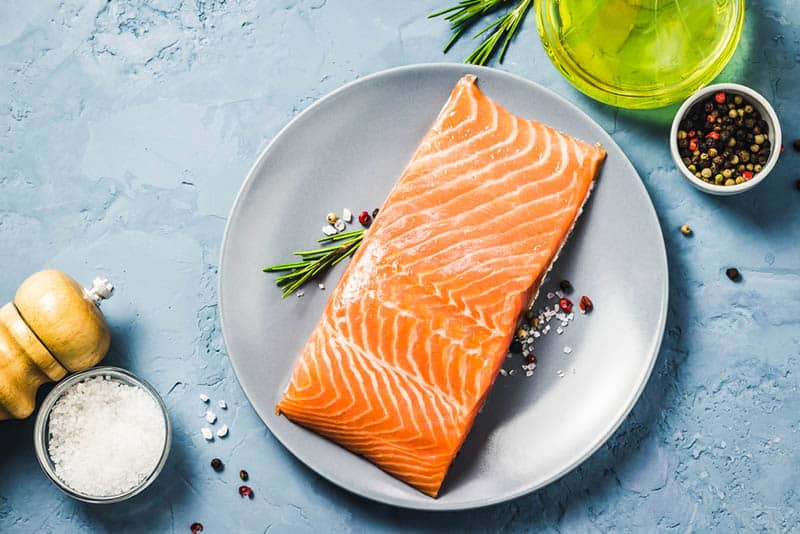 Now that you know the answer to: can pregnant women eat ceviche?

You might be wondering when you will be able to eat raw fish again.

Unfortunately, I don’t have much good news, as you might have to lay off this Peruvian delicacy for several years, or rather, until a few months after you stop breastfeeding.

While your body will be back to normal long before the breastfeeding stage of raising your child ends, there’s still a risk of the parasite transferring to your child through breast milk and infecting him, so you shouldn’t eat this food while nursing.

Once your kiddo is fully weaned, you can go to town on all the ceviche and sashimi your heart desires.

As far as your kids are concerned, however, they might have to wait a bit longer, until they’re at least 6 years old, in fact. 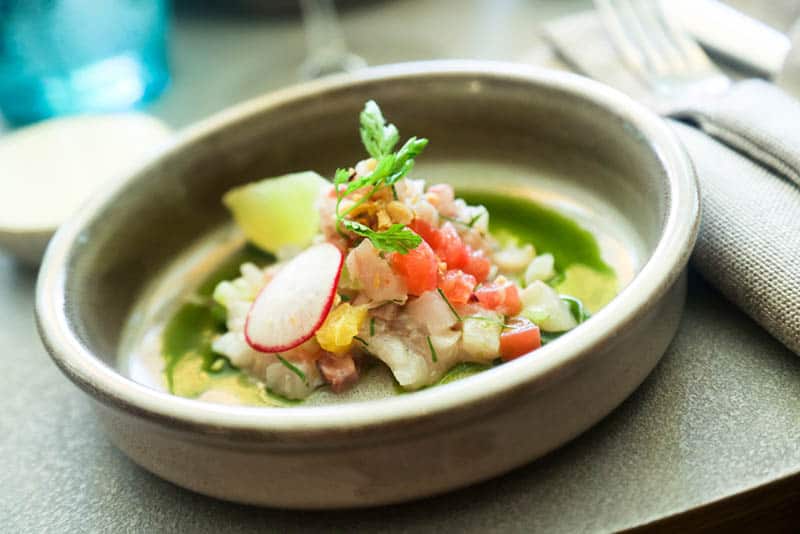 When it comes to the question: can pregnant women eat ceviche?

The answer is a resounding NO, much to the dismay of many seafood fans out there.

The same applies to any other dish that contains uncooked seafood.

While some may claim that the acid from the marinade and the other ingredients like vinegar, lemon, and lime juice help neutralize the bacteria, that couldn’t be further from the truth.

That said, just because raw fish is unsafe, it doesn’t mean that all fish is bad.

In fact, it’s one of the healthiest sources of protein out there.

It contains a lot of vital nutrients, vitamins, and minerals that’ll aid you during your pregnancy and ensure your child grows up to be healthy and strong.

If you ever have any questions about when you can start putting raw fish back into your diet, and even introducing it into your own child’s, I suggest first consulting your family doctor and any other qualified healthcare professional on the matter.

Until then, stay put, and stick with some of the healthy fish I mentioned above.

Bon Appetit, and until next time, mamma.

READ NEXT: Can Babies Eat Cucumber? Health Benefits And Risks 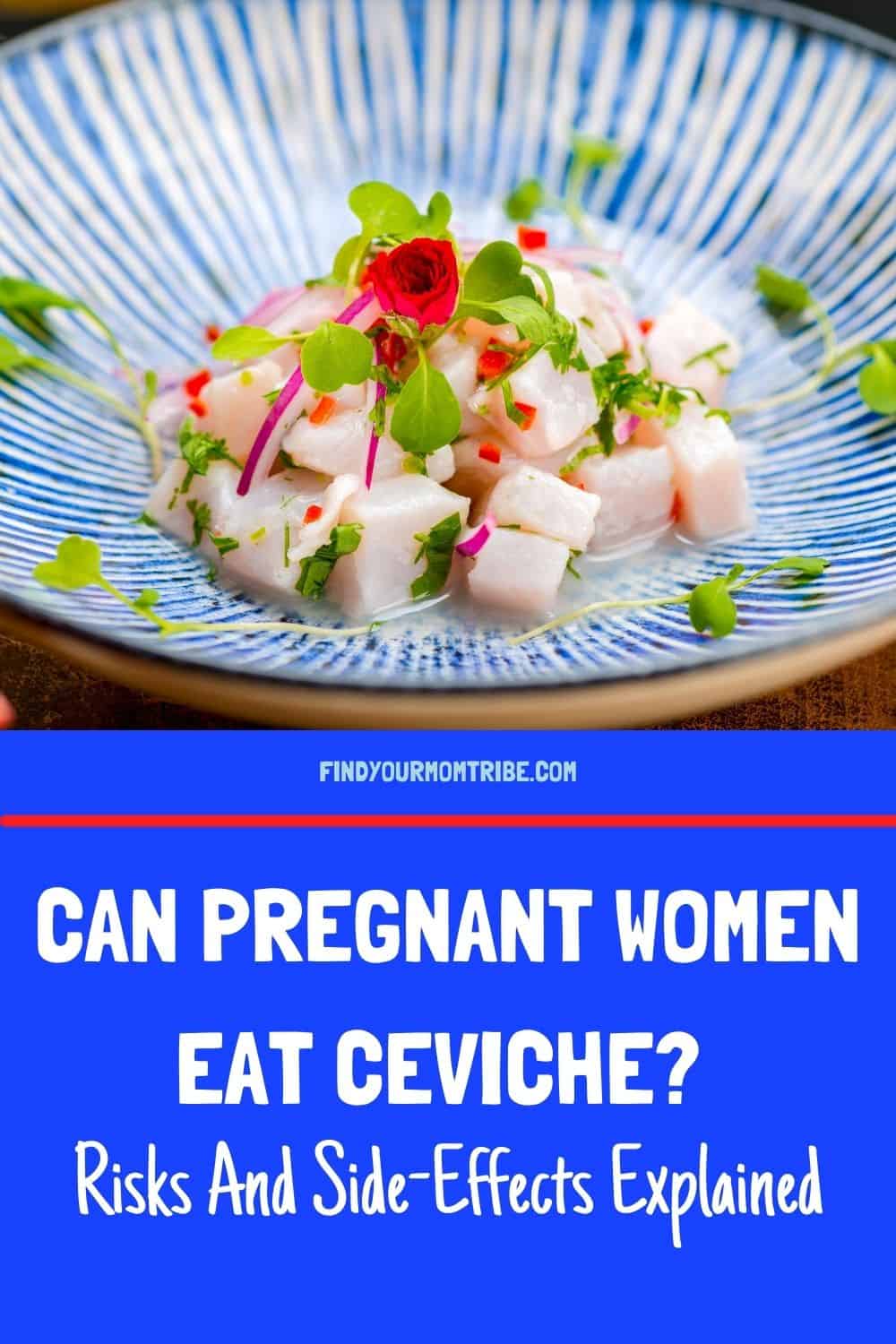