Avery is a very mysterious and fantastical name, one that works both as a girl’s and a boy’s name. It’s beautiful, but can be made even more so by finding some good middle names for Avery that complement it.

​​Because of its unisex nature, finding middle names for Avery that fit isn’t all that hard, but finding the right one for your child can be a challenge because you might get overwhelmed with all the available choices.

The name Avery is one of those rather unique baby names that allows for both traditional and unique middle names. As its meaning is “Elf ruler”, it also allows for an extra avenue of potential monikers.

You get to pull from various fantasy books and other forms of fiction where some of the options might be weird fits for other names.

Read on to find out where the name Avery originates from as well as some of the top middle names for it. 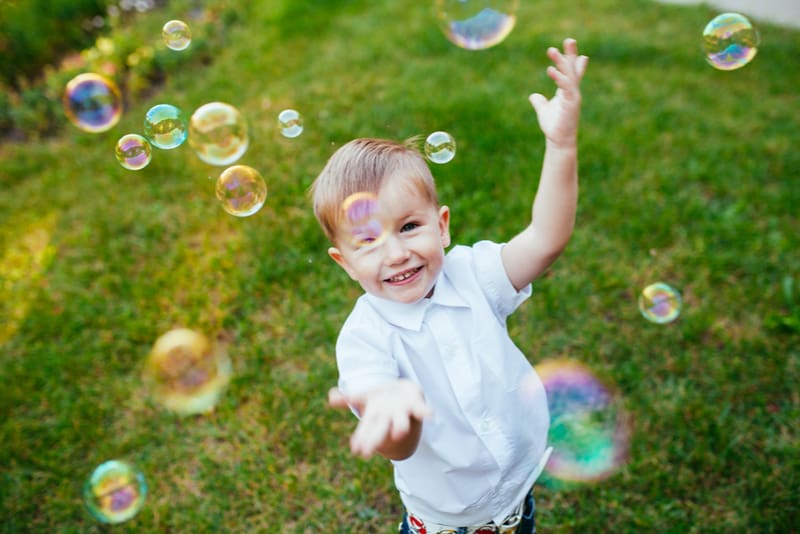 Unlike many other names that we’ve gone through together thus far, the name Avery is of old English origin at its core, meaning “Elf ruler/king/queen” as mentioned before.

The translation varies depending on which gender you’re referring to, but ultimately the ruler part encompasses either.

The name is also derived from Alfred, one of the more popular old French names, as well as Alberich, an ancient Germanic name that got a bit lost to time.

Given its rather flexible nature, seeing as it fits both girls and boys, it’s earned its spot as one of the most popular names on many baby name lists.

It’s in the top 75 globally and top 20 on US name lists according to the charts presented by the US Social Security Administration.

Naturally, when it’s one of the more popular baby boy and baby girl names out there, it also winds up as a name for some famous celebrities.

One such person is Avery Bradley, a famous basketball player in the NBA whose last team was the Houston Rockets.

Next, we have Avery Brooks, a famous actor who portrayed Benjamin Sisko in the Star Trek series.

Finally, another notable mention is the late James Avery, the man known best as uncle Phil from “The Fresh Prince of Bel Air”, a TV show many people who grew up in the ’90s remember fondly.

All of these, especially mister James Avery, make for wonderful role models for children too.

Now, it’s time to start uncovering some great middle names for your child! 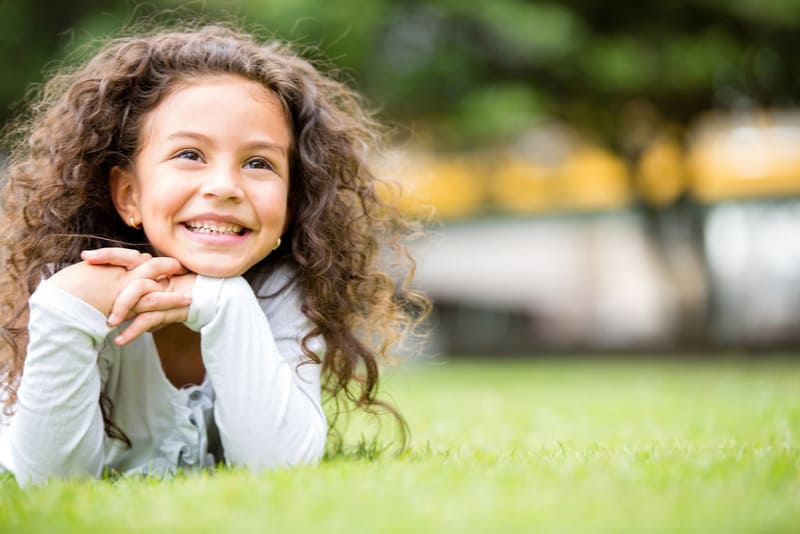 While many parents want to branch off from the beaten path and try going for unique charm, there’s a reason why popular names work and sometimes it’s best to stick with them.

As tempting as it is to give your baby girl or your baby boy a relatively uncommon middle name, they tend to backfire more often than not and end up being the cause for bullying among other things.

This is why the perfect middle names tend to be the ones used most often. After all, the name has been around for a while and certain expectations are already in place.

Here are some of the most popular ones for both girls and boys: 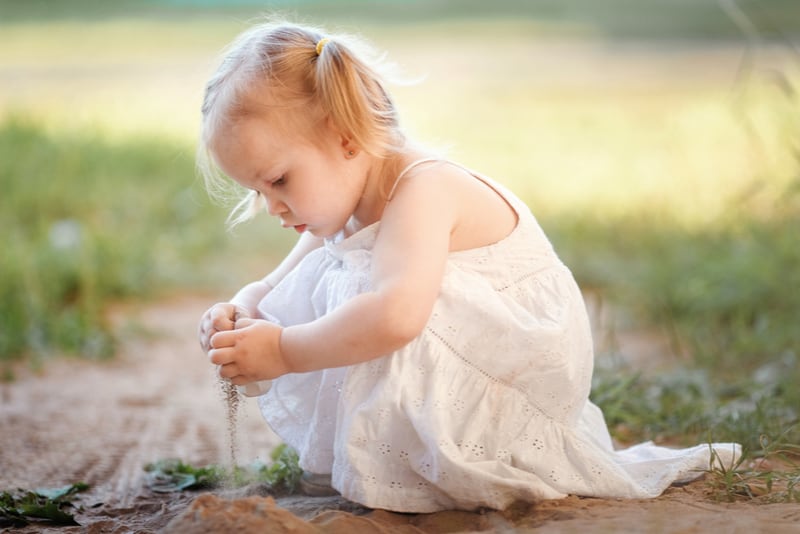 Seeing as Avery is a unisex name, I felt that it was best to split the names up based on gender. Although, you can feel free to borrow from either side if you feel one fits with your child better than the others.

That’s the beauty of naming after all. Speaking of which, here are some great options for girls that are quite elegant: 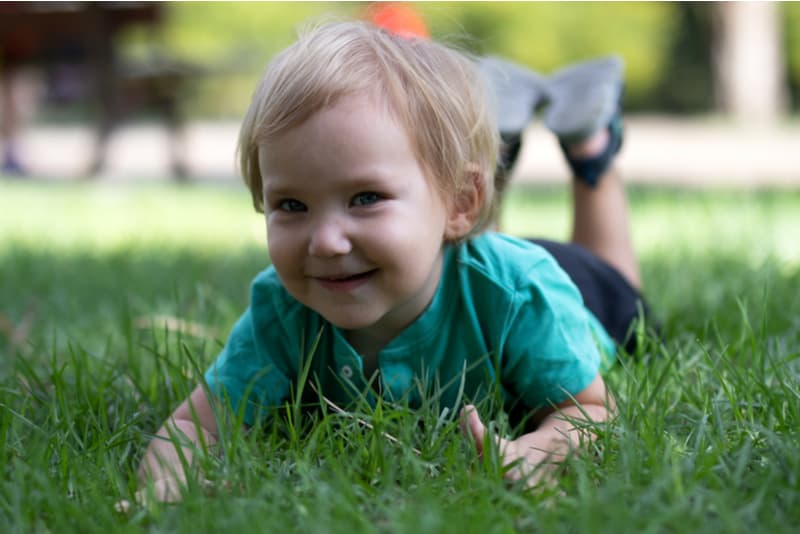 Next up are the boy’s names. As this name has five letters and three syllables, it works well with both shorter and longer names.

But don’t forget to factor in your last name as well!

Here are several cool and unique names for you to choose from: 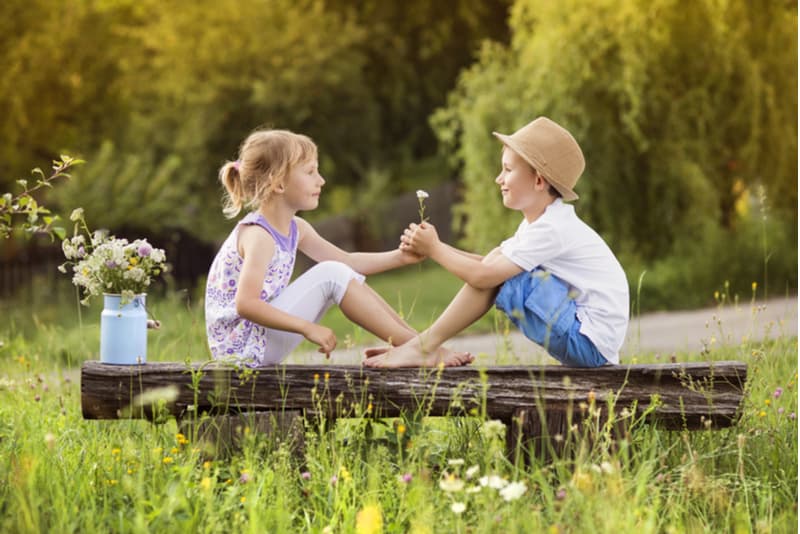 While there are names that better fit a boy or a girl in some cases, there are also options that naturally fit either side of the coin.

Here are some of the best options:

How To Come Up With Middle Names On Your Own 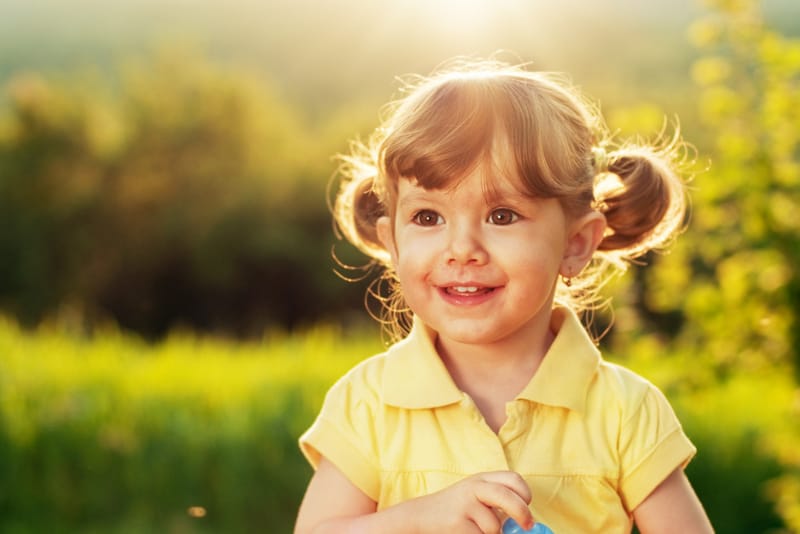 While many middle names were listed above, I know that, for some of you at least, even those weren’t enough inspiration to get your gears running.

Some of you want to make a name of your own that you’ll feel proud of and that carries some meaning.

I understand that feeling too – I always prefer doing things myself rather than looking through someone else’s work for help (though I’ve learned that it’s not shameful to do so).

You get those happy butterflies in your stomach when you manage to finally find that one name that fits your child perfectly.

But how do you go about this? Here are 4 ways to help you out:

The first great example always lies at the root, the root of your family tree that is.

There are usually some really great middle names hiding in there with a lot of deeper ties that make them more memorable.

This way you can honor a family member whose name gets to be carried on and remembered even after they’re long gone.

It’s both a great way to pay respects to just how much these people meant to either you or your child and a great honor for the child as well.

The good thing is that the name itself doesn’t have to fit either a boy or a girl, especially given the name’s unisex nature so you don’t have to worry about only looking at the women for a girl’s middle name or vice versa.

That said, just because this is a great honor, try to think of your child’s feelings about this too. Some names that were common in the past are now considered outdated or even silly, so go for names that have a timeless quality.

The really neat thing that the middle name allows that’s worth mentioning is that you can also abbreviate the full name into initials which can then serve as a little nickname for your child too. 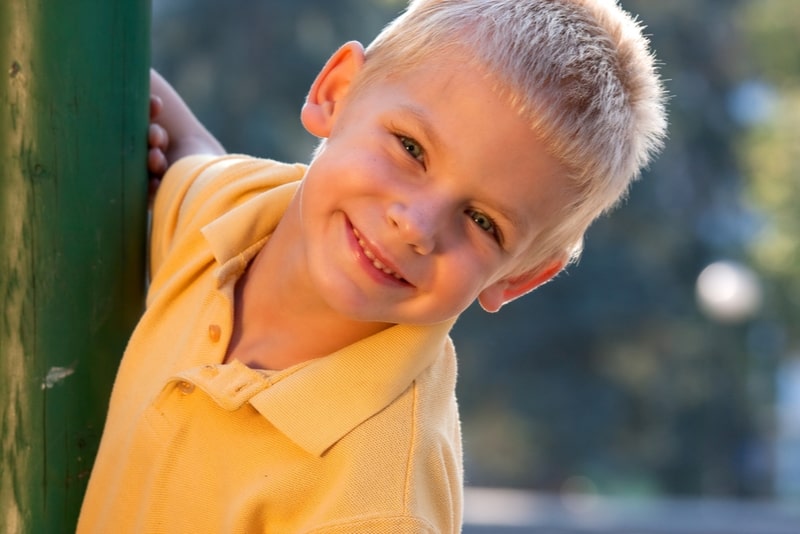 Who says you have to pick only one middle name?

While the majority of parents only give two personal names to their children, followed by a family name, you can also choose two middle names.

This is common among royalty who sometimes have as many as four names but you don’t have to go that far. Besides, it’ll be a lot for your little one to learn how to spell!

However, if you do have two names picked out that you like equally, then why not use both? Some might consider it unconventional but it’s definitely not unheard of.

One of the better sources for these sorts of names is your old list of baby names that were up for consideration alongside Avery.

This can be a real goldmine where you get to add the runner-up as the extra name. You don’t have to dwell on it too much as you’ve already likely ranked them and I’m sure they’re just as beautiful as the first name.

This method is one of the tried and true traditions and is the go-to for many moms out there. Give it a try and see if you have any hidden gems lying about in there. 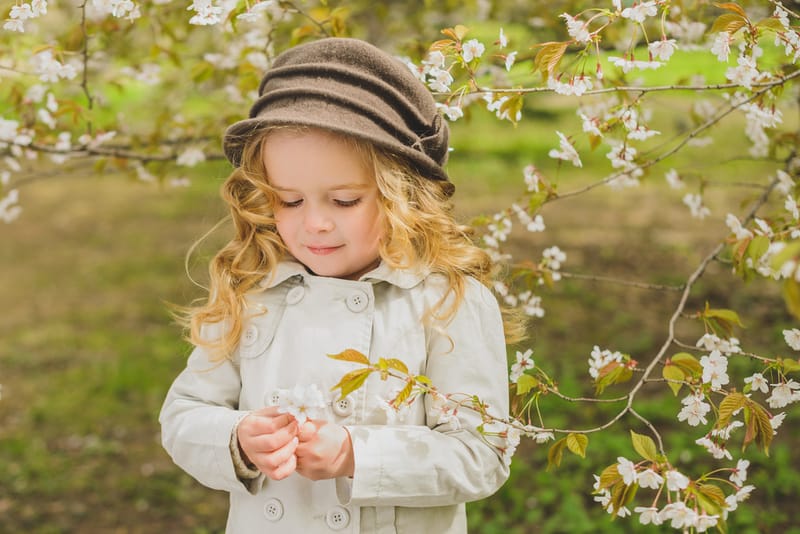 If you’re ever struggling to find a proper middle name for your new baby, a good method for this gender-neutral name that means “Elf ruler” is to reach for some of those lengthy fantasy books you have laying around.

You can even resort to some online fantasy name generators too if you’re really looking to dig into some obscure names, but I advise sticking to the books if you want to grab middle names with some relevance.

That said, some fantasy names can still feel a bit awkward to use, so don’t copy them directly if they don’t fit. Rather try to adjust them. (Even though Avery Frodo does sound cute). Or, use them as inspiration to forge an entirely original name.

5. Memorable places as a source of inspiration

Last, but definitely not least, are all of the places where your family has made wonderful memories.

Whether it was a family trip or the place where you first met your partner, try giving it a go and see just how well it fits with your child’s first name.

This way, your beloved memories become a permanent part of your baby’s name. And what better way is there to commemorate them? 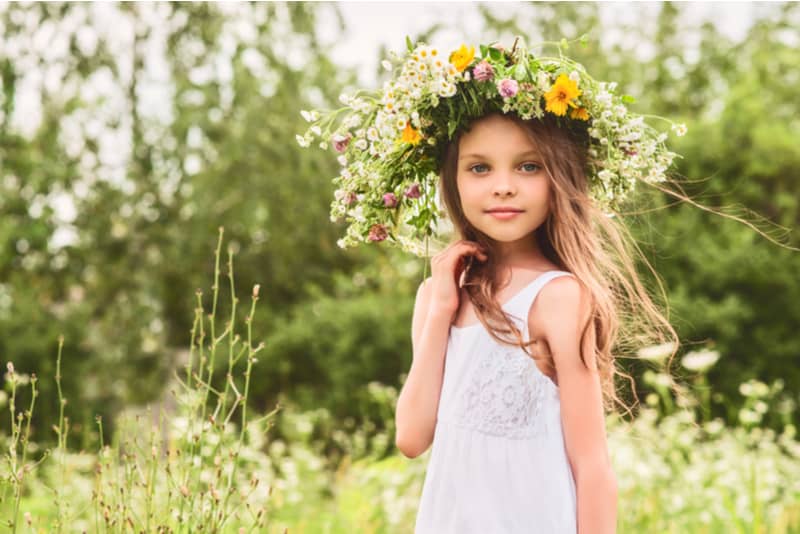 Thanks to its unisex nature, there are plenty of middle names for Avery to choose from and many methods to form a name on your own that’ll have a meaning that’s special to you.

Regardless of which method or name you choose, keep in mind that all of the meanings, the levels of uniqueness, etc., all come second to your child and their own comfort.

Make sure to pick a name that they won’t resent in the future when they’re older and have a sense of their own identity. A lot of kids tend to get bullied for less and it’s best not to paint any potentially risky targets on their backs.

That said, I’m sure that you’ll be able to figure out a proper middle name for your little one. Until next time, mamma. 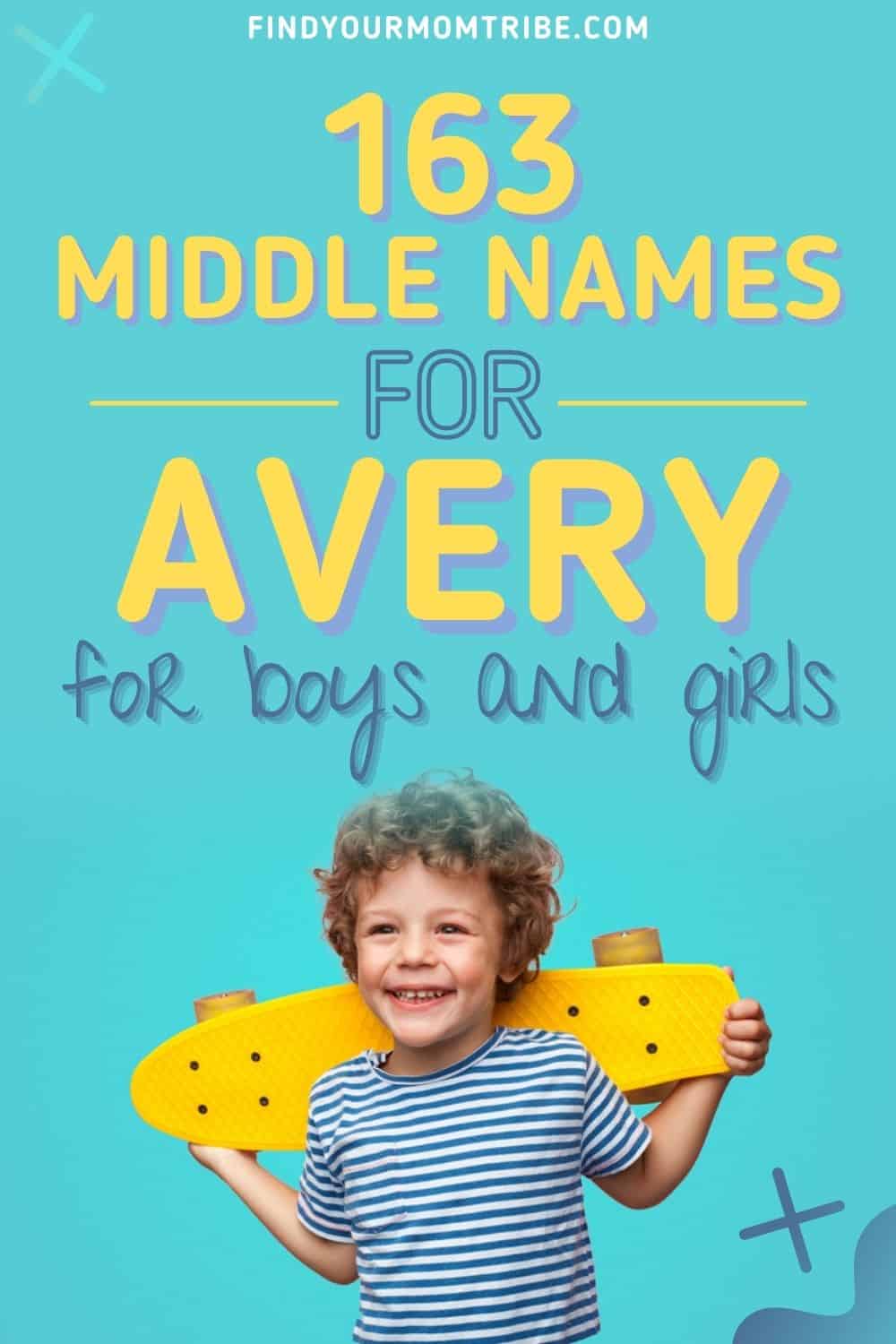