Sophia is one of the most sophisticated names for girls and a perfect base for adorable nicknames.

There are plenty of sweet nicknames for Sophia that’ll perfectly describe her beautiful personality.

This name is popular around the world in different forms, depending on the spelling rules of each language.

Therefore, it’s no surprise to hear Spanish, Italian, or even Russian nicknames, which are becoming very popular in the U.S., as well.

One of the most famous actresses who brought this name to the top of the popular baby name lists in the U.S. is Sophia Loren.

She may or may not be the reason you decided to give your little one the same name, but one thing is for sure – now you need to find the best nickname for your little Soph.

I have created a list of the best nicknames for Sophia that will make you smile and I’m sure you’ll find at least two or three options for your little one. 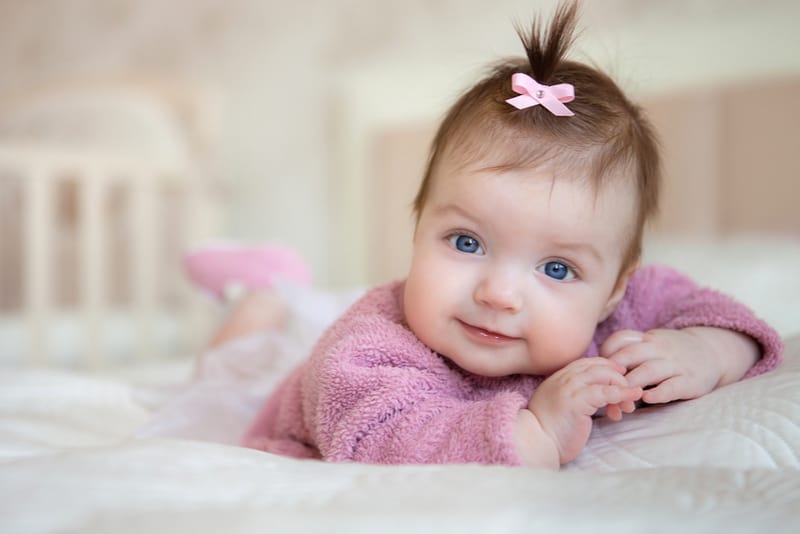 This is one of the most beautiful girl names of Greek origin which describes a wise and intelligent girl.

Sophia is not only used in the Greek or English language. It’s a common feminine name in Russian, French, German, Spanish, and Italian cultures and languages.

The name became popular in Europe around the 17th century and one of the most famous women carrying this name was the wife of Elector Ernest Augustus, Sophia of Hanover, who also gave birth to the King of England, George I.

However, after the 18th century, there was a sudden drop in the popularity of this name, but it reached the top 100 popular names list after 1997.

The rise in popularity can probably be attributed to the celebrities Sophia Loren and Sofia Vergara, two well-known Hollywood actresses.

Most Popular Nicknames For Sophia 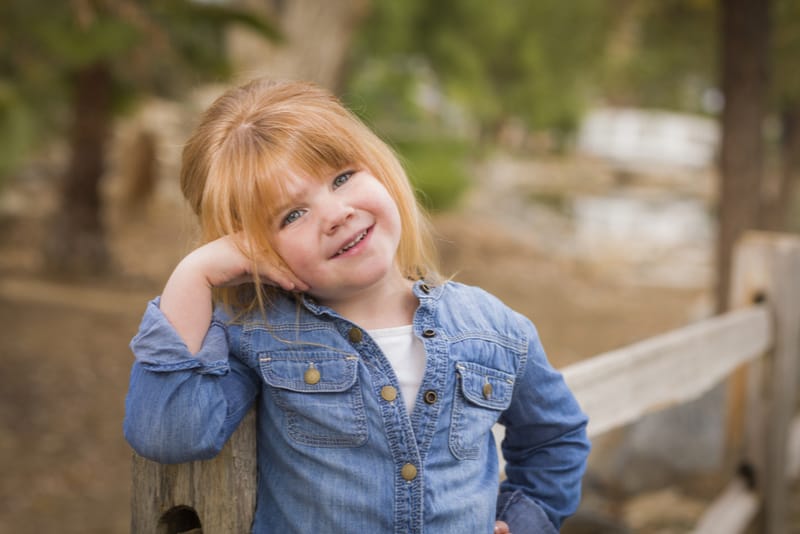 Sophia is a very popular feminine moniker that has over 35 different name forms, depending on the language and culture.

This given name has stayed in the top 5 on popular name lists for 12 years.

However, having the same name as hundreds of thousands of girls can become a bit overwhelming.

Therefore, many parents decide to add a more unique nickname that will make their little girls stand out from others.

Unfortunately, nicknames (especially unique ones) are not allowed on any official documents yet, but your little one may use her nickname in everyday life.

Nicknames like Soph, Phia, Effie, etc., might be perfect solutions for parents who want to give their baby girls a nickname more unique than the first name, but still popular enough for them not to feel isolated from the community.

Here are some of the cutest nicknames for your little girl: 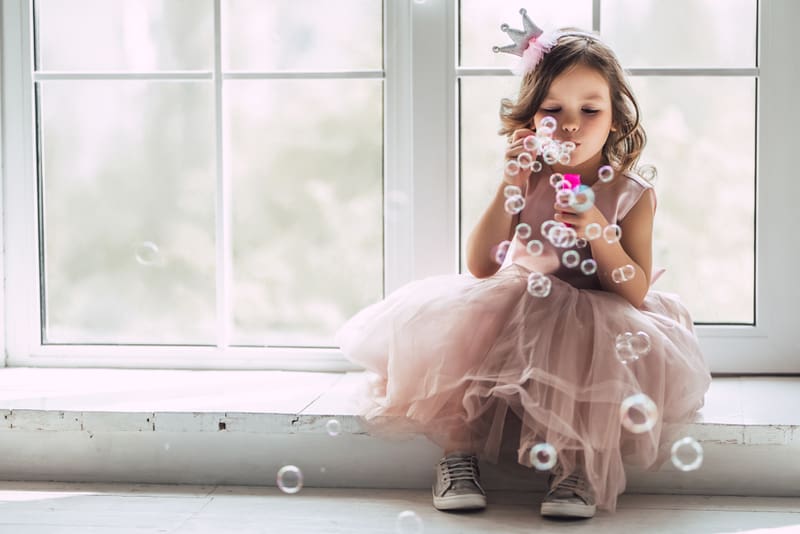 There are lots of adorable pet names for this beautiful name that means wisdom.

A name meaning that represents intelligence does sound quite serious, but that doesn’t mean Sophia can’t have a little bit of fun with her name, right?

Cute nicknames are usually given by parents, grandparents, or other people who are very close to us.

Most of these nicknames represent a cute, funny, or unforgettable and lovely moment.

However, a nickname can also be a symbol of love and affection, especially when it comes from a parent or grandparent.

Cute nicknames are always welcome because they put a smile on everyone’s face. One word or expression might be more than enough to make someone happy!

Here are some of the most adorable pet names for your princess: 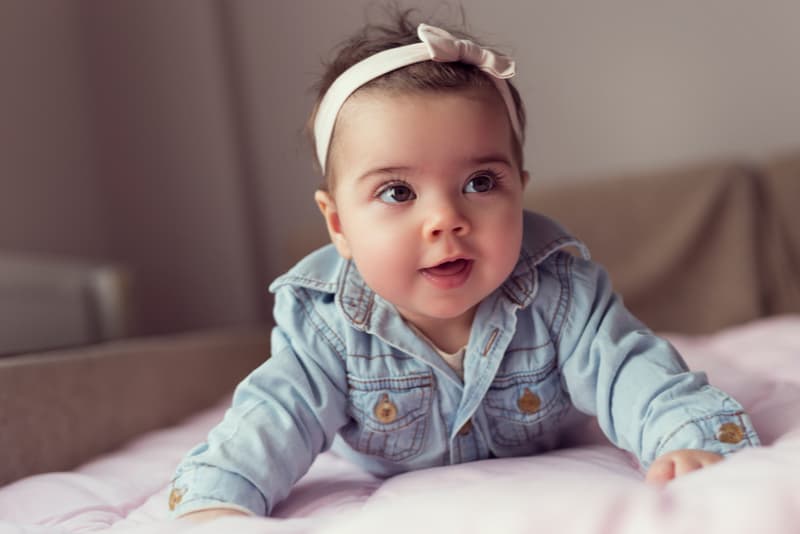 Sophias love to have fun and most girls with this moniker have a great sense of humor.

However, some people are not big fans of funny nicknames, so it would be better to play it safe if you’re not sure whether she’ll like it or not.

Open-minded girls with the name Sophia will surely love all the nicknames from the list below!

Here are some of the sweetest and funniest nicknames for Sophia: 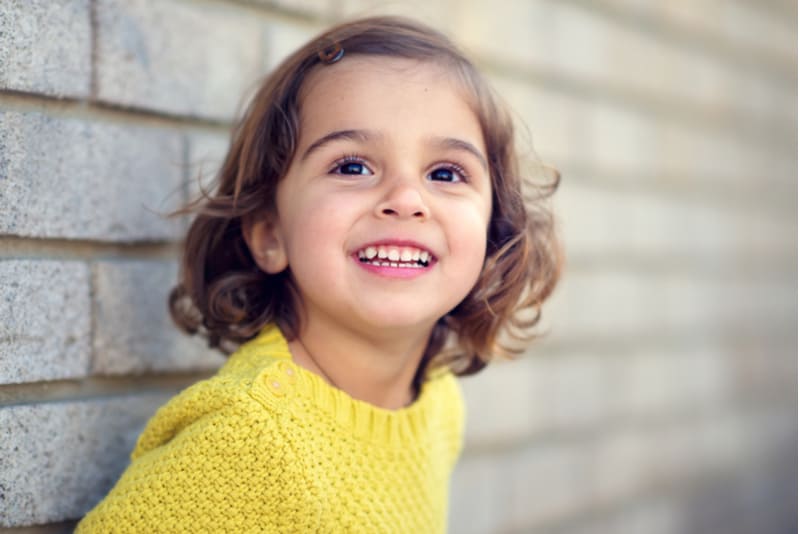 Middle names are an important part of our culture, an unwritten rule that’s not obligatory but is still followed by millions of people.

Some people add a second name in order to honor someone close to them, a family member or a friend.

Others just can’t decide between two names, so they make a compromise and use both for their little one.

There are plenty of good name ideas and it’s really difficult to choose only one.

Instead of discussing which one is better, you can use both names and solve the issue right away!

Middle names are a great way to give your kiddo the option of choosing her own name when she becomes an adult.

The most important part of naming your child is to choose names that complement your last name.

Make sure that the full name combination doesn’t become a base for any unwanted nicknames or expressions that might put your little one into an uncomfortable situation.

These are some of the best middle name ideas for your little princess, I’m sure you’ll find at least one great match! 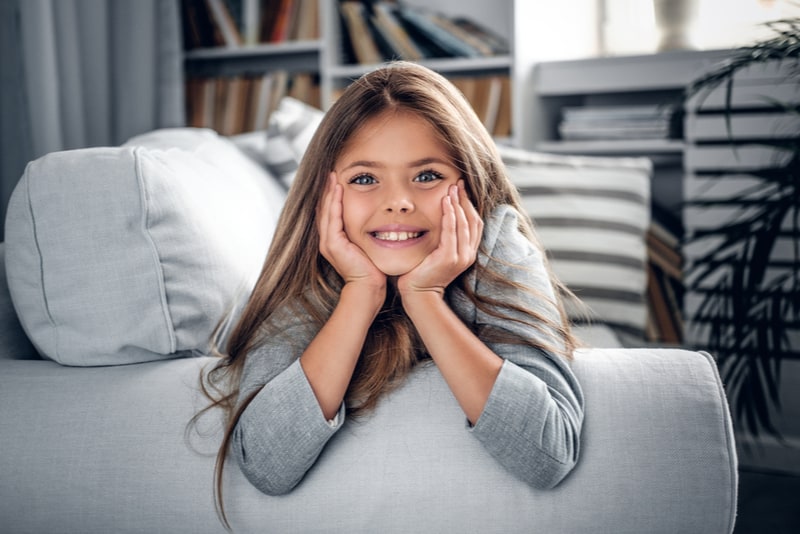 There have been numerous celebrities throughout history who have carried the original name Sophia or a slightly different version.

This name is very sophisticated and elegant and people usually associate it with regal, beautiful women.

Here are some of the most famous women who have carried this gracious name with pride:

• Sophia Loren – A legendary Italian actress who dedicated her life to her career. She was recognized by the American Film Institute that awarded her with the greatest female star of classic Hollywood.

• Sofia Vergara – A well-known American actress who was born in Colombia.

She’s also famous for being a model and a producer. Vergara has been recognized as one of the highest paid actresses on TV.

• Sophie Turner – Famous actress who was born in England. You probably remember her for her role in “Game of Thrones”, one of the most popular fantasy TV shows in the last decade.

• Sophia Bush – A young American actress who became famous for her role as a popular high school girl, Brooke Davis, in “One Tree Hill”.

• Sofia Coppola – With famous filmmaker Francis Ford Coppola as her dad, Sophia was bound to enter the movie world at some point. Coppola has built her career as an actress and director in Hollywood. 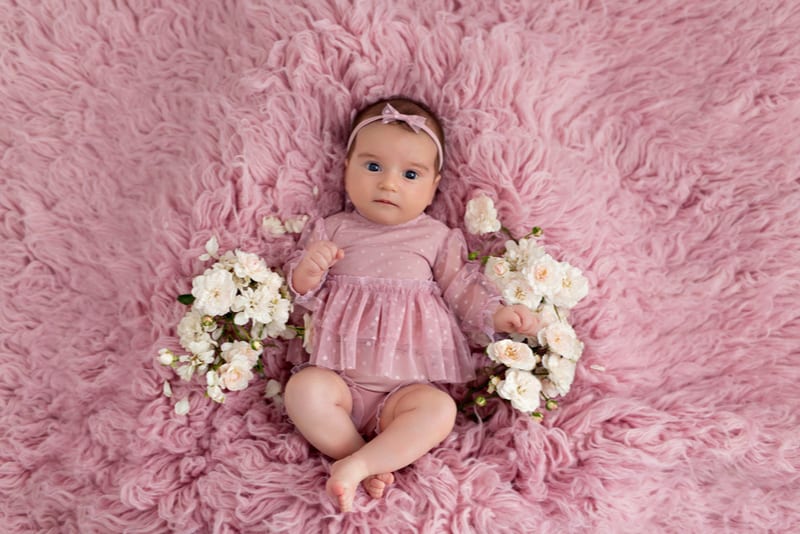 Siblings usually don’t call each other by their actual names – mostly because they use nicknames to tease each other and get into fights.

Unfortunately, there’s nothing you can do about that.

Those things usually happen during earlier years, when jealousy between siblings hits hard, but after some time, they start getting along well.

However, even if they don’t get along as kids, parents still often prefer giving matching names to siblings.

If you’re expecting Sophia’s brother or sister and you don’t know which name would go well with your firstborn’s moniker, here are some name ideas you might like: 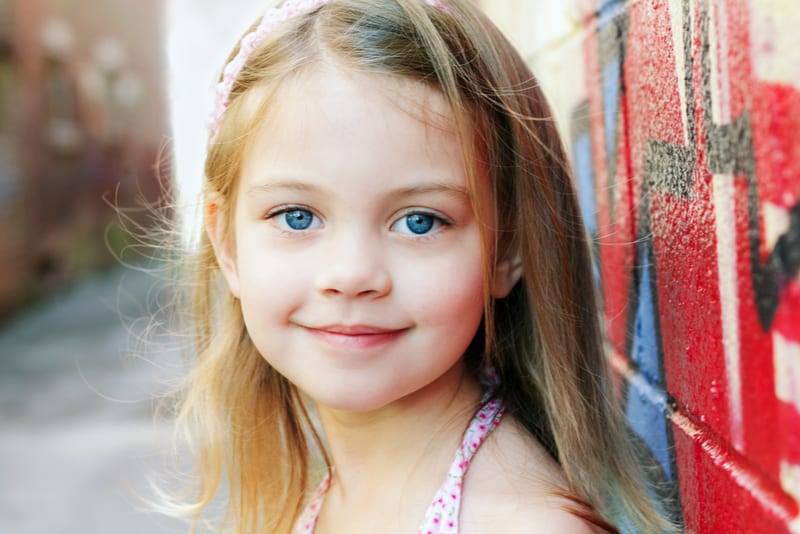 Have you found the best nickname for Sophia?

My personal favorites are Effie and Super Sophie! They both sound adorable, but they also describe a strong young girl who loves challenges and adventures.

Finding a good nickname for a boy or girl is not as easy as it seems.

Nicknames become a part of a person’s identity through time.

These short forms usually describe your child’s personality even when she becomes an adult.

That’s why it’s important to find a nickname that won’t sound insulting to anyone or cause any discomfort to your kiddo.

If you’re afraid of experimenting with more unique nicknames, you can always play it safe with popular nicknames that are always trending.

I hope this article has helped you pick out the best nicknames for Sophia. 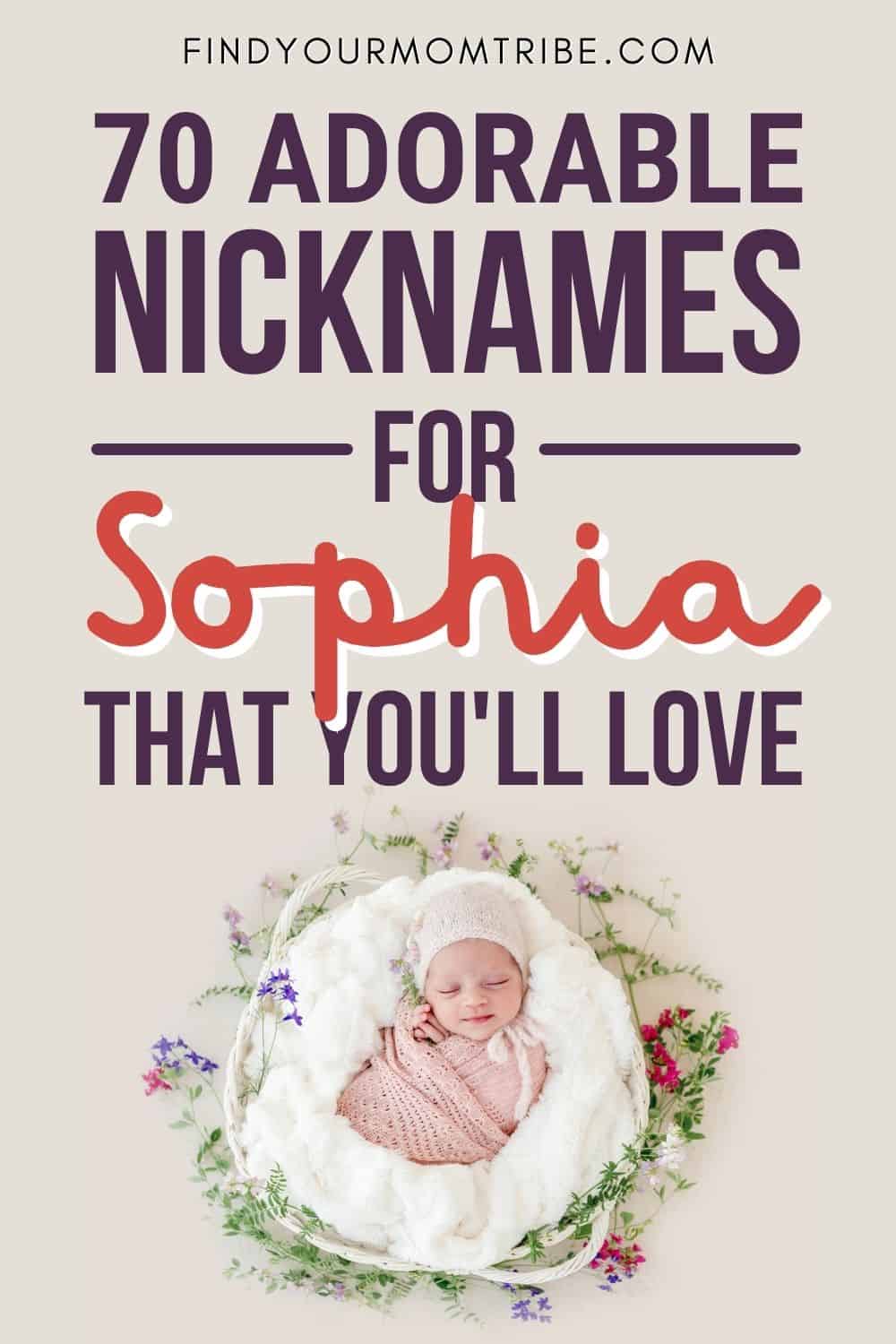