October is one of the most entertaining months of the year! It’s the beginning of the holiday season and a great month to give birth.

October babies are happy, strong, and funny. However, your little one might be quite stubborn too, but that’ll help her to become a very successful adult.

An interesting fact about October is that it also marks the celebration of Father’s Day in a European country, Luxembourg.

If you ever find yourself in Luxembourg on the first Sunday of October, you better buy something for your dad – you know what they say: “When in Rome, do as the Romans do!”.

But dads aside, here are some of the most amazing facts about babies born in October that might be a real surprise for you! 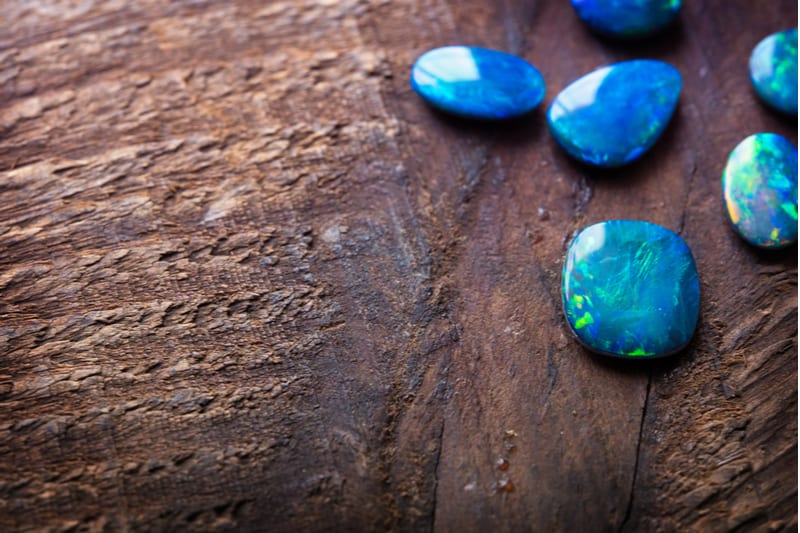 October babies are truly special in every way, including their birthstones!

Tourmaline is the most colorful gem in the world, and it owes its beautiful and vivid colors to the copper that can be found in traces, which works as a coloring agent.

Opal is a very impressive gemstone with a spectrum of colors that shift as the light changes.

However, there are some old folk tales that say those who aren’t born in October shouldn’t wear Opal, or they’ll have bad luck for the rest of their lives (October-borns are safe, though).

Tourmaline symbolizes reconciliation, compassion, and a good temper, while Opal stands for faithfulness and hope.

Marigold (Calendula) is known in some cultures as the grieving flower, but its vivid orange color turned the symbolism of this flower into the representation of the Sun, light, and resurrection.

Cosmos represents harmony and peace, which is visible through the symmetry of the stem and blossom.

3. A Libra or a Scorpio child 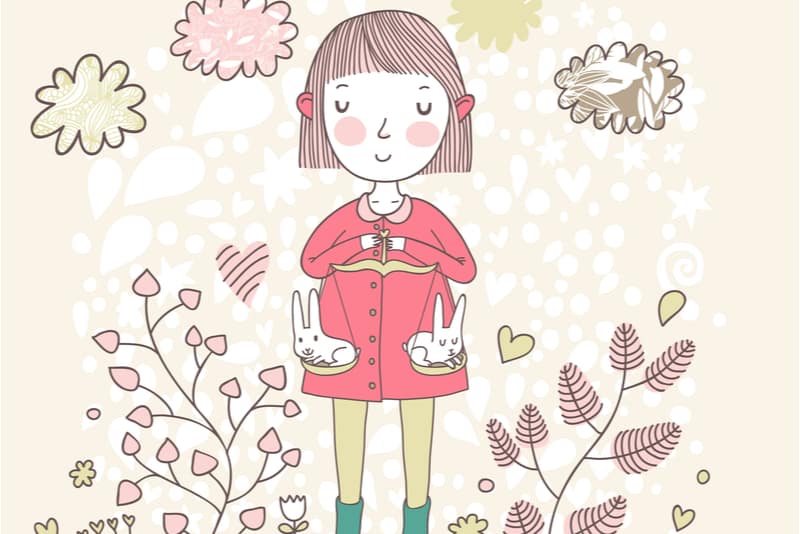 An October baby’s personality traits are usually described by the zodiac signs Libra and Scorpio.

A Libra kiddo is an outgoing person, full of energy and ready for challenges. However, she’s also quite indecisive about everything, so she might need you to make decisions for her, at least during her younger years.

Scorpio babies are very intense, emotional, and passionate about everything. Scorpios never quit and work hard until they get what they want.

4. Most beautiful time of the year

October babies are born in one of the most beautiful seasons of the year, fall. Orange, yellow, and brown leaves are just some of the beautiful pieces of fall decor that announce the arrival of winter, but October does have its warmer days as well.

However, if you live in the southern hemisphere you get to enjoy all the joys of spring in October! 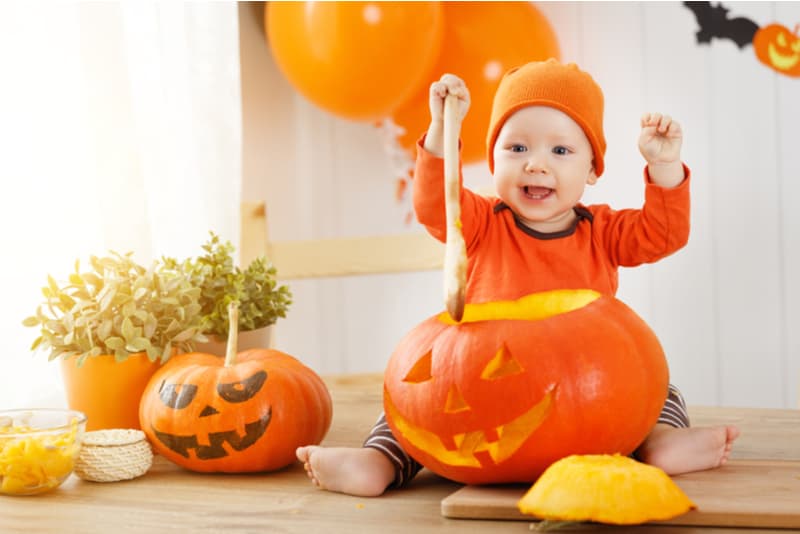 October is the month of fun for both children and adults! On Halloween, we can all be whatever we like, and it’s completely socially acceptable to be in a cool costume when you’re over the age of 30.

If your child celebrates her birthday in October, you can throw her an awesome Halloween-themed birthday party!

6. Sweet as a spicy pumpkin latte

Although your baby is not made of pumpkin spice, she’s still as sweet as a pumpkin latte!

A lot of parents whose babies are born in October opt for a pumpkin-themed baby photoshoot, which is something you might want to look into for your little one as well.

7. October kids get all the fun! 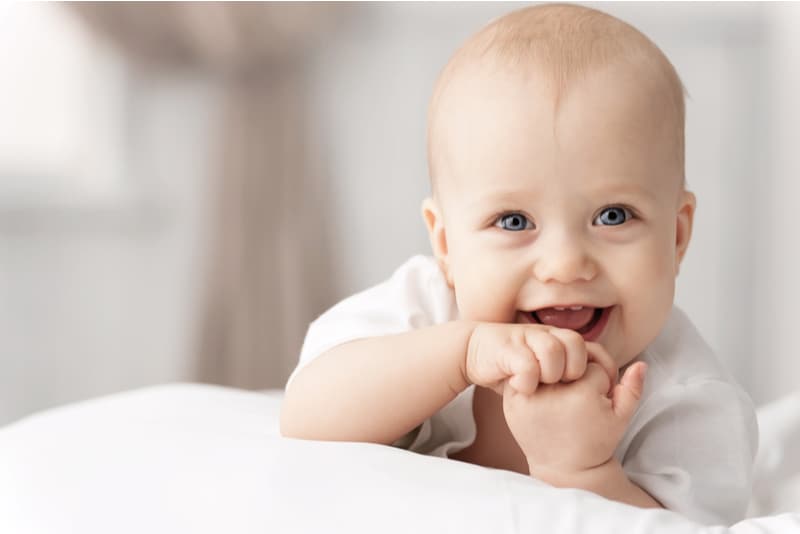 Having a baby in October is one of the greatest blessings and gifts for upcoming holidays and events, whether it’s Halloween, Christmas, or New Year.

A hard-working, stubborn, and ambitious kiddo will certainly have a great career in the future.

According to presidential data, six U.S. presidents have been born in October:

This might be a coincidence, but there’s also a chance your little one will become a presidential candidate, or at the very least, have a great career in politics!

I admire the mamas who go through their third trimester during the hottest time of the year.

However, breastfeeding during October is the real deal! For me, nursing during summer is far worse than being pregnant during the summer, because you get all sticky and the baby gets sticky and it all turns into a huge mess.

However, the cooler weather of October will enable you to fully enjoy that special time with your little one.

Just like September babies, children born in October have a lower risk of depression. According to a study from 2012, October kids are considered to be more physically and mentally strong.

Mental health is very important, and it’s not strictly connected to a birth month, of course. Therefore, you should never hesitate to react if you notice any changes or unusual behavior in your child.

11. Just in time for the holidays 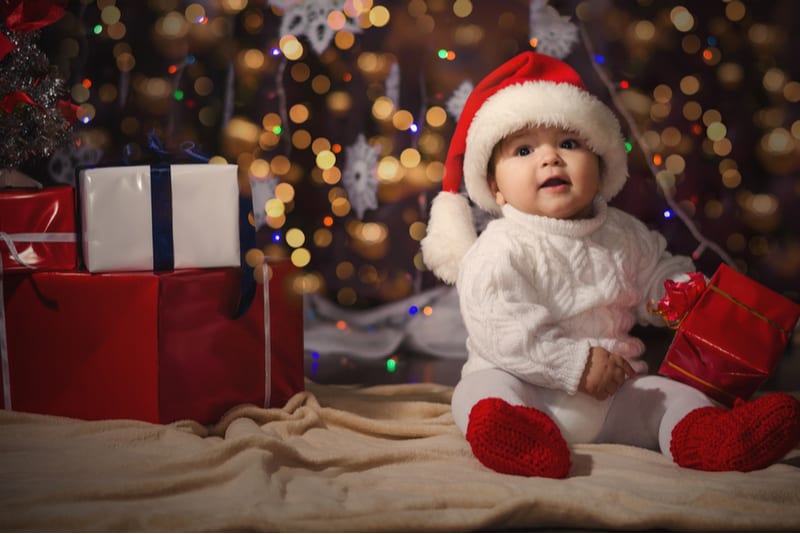 Your holidays will be even better when you spend them with your little one! If you give birth in October, you’ll get the opportunity to have the best holidays of your life so far, and each year will just get better and better!

You can order cute Christmas onesies from Amazon and enjoy the most wonderful time of the year with your baby.

Most children prefer having a birthday party at school.

Your little one might feel disappointed during summer because most of her friends go on vacations with their families, so she ends up with no one to celebrate her birthday with.

However, if your child celebrates an October birthday, you can throw a little party at school and make your little one the happiest kiddo in the world. 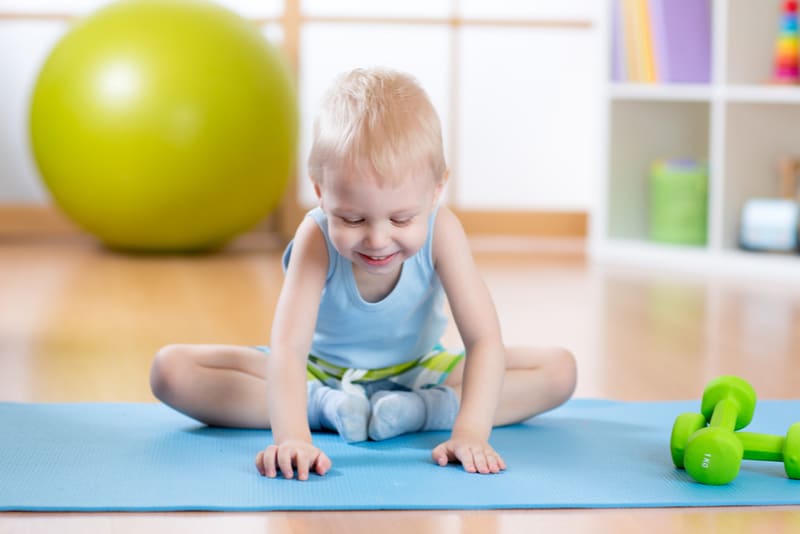 Your baby might not become the future president of the US, but she could end up being a great athlete as a result of the thick bones and proper development of motor skills that occur as a result of good vitamin D intake, which you’ll get a lot of during your summer pregnancy and by taking prenatal vitamins.

September and October-borns share a lot of things in common, even the number of birthdays they might celebrate.

According to a study conducted by the University of Chicago, fall babies have a higher chance of becoming centenarians than those born in different seasons.

It’s exciting to think that your baby might one day celebrate her 100th birthday! 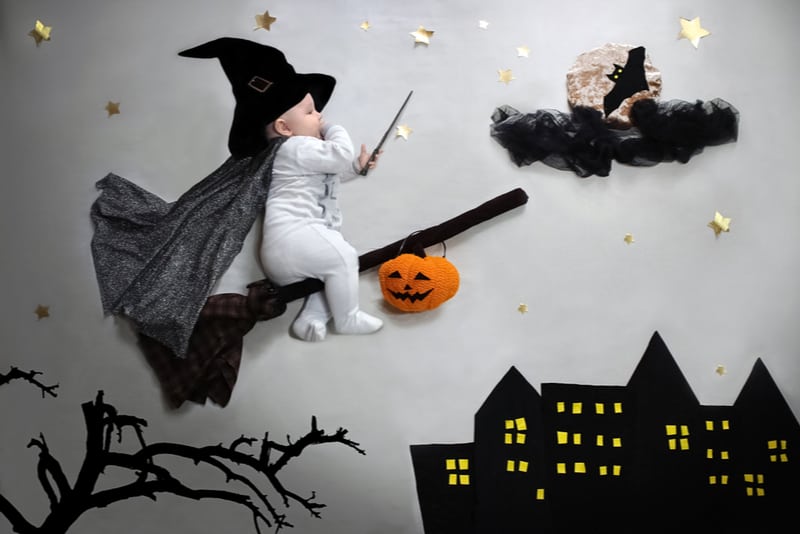 Your little one will be born just in time for Halloween, so why not dress her up in the cutest newborn pumpkin or other Halloween-related costumes?

I’m sure she’ll look adorable no matter which costume you pick!

Your baby will celebrate her birthday with some of the greatest stars on this planet, including famous musicians, actors and actresses, and artists.

Here are some of the most famous names who celebrate their birthdays in October:

• Pablo Picasso – A famous Spanish painter, ceramicist, sculptor, and theatre designer, who was born on October 25.

• John Lennon – A member of “The Beatles”. He was a musician and activist who was born on October 9 in 1940, but tragically lost his life when he was only 40.

• Bill Gates – A philanthropist, businessman, and the co-founder of Microsoft. He was born on October 28.

• Kim Kardashian – A famous TV personality who was born on October 21.

• Matt Damon – A Hollywood actor you might recognize from movies like “Good Will Hunting”, “The Martian”, and “The Departed”. He was born on October 8.

• Kate Winslet – One of the most popular actresses in Hollywood ever since her legendary role in the “Titanic” (I’m not crying, you are!). With this movie, Kate and Leo won the hearts of millions of people all over the world.

Kate is also an October baby, as she was born on October 5.

• Julia Roberts – We all remember her as the pretty woman that Richard Gere’s character fell in love with, just as we all did!

She also belongs to October royalty, as she was born on October 28.

17. October-borns have a great heart 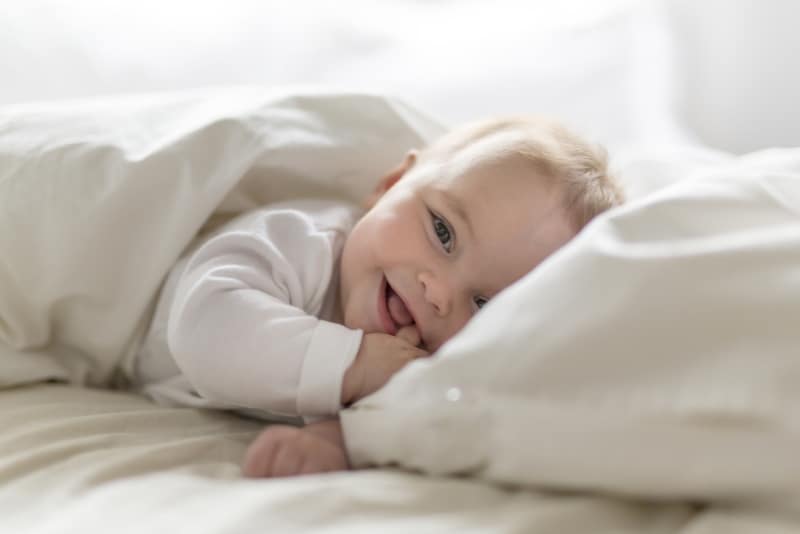 This is literally true! According to science, babies who are born in this month are less likely to develop cardiovascular disease.

Of course, this doesn’t mean your child won’t have any heart problems during her life, but the risk is much lower than for people who were born in other months.

September babies are slightly taller than their peers from the summer, spring, and winter seasons. However, October babies might be even taller than babies born in September. 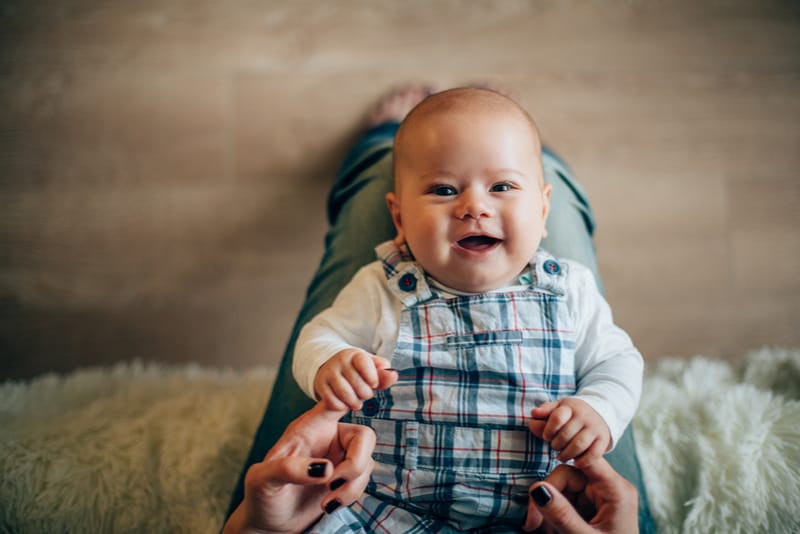 October kiddos are irresistible! Thanks to the influence of the Libra and Scorpio signs, these kids usually know how to get whatever they want from their parents.

If your due date is in October, get ready to be wrapped around your little one’s little finger.

Certain theories claim that there are a lot fewer births on October 31. Experts from the Yale University School of Public Health claim that moms subconsciously don’t want their little ones being born on Halloween.

True or not, the fact is that as far as holidays go, a lot more mamas give birth on Valentine’s Day than Halloween. 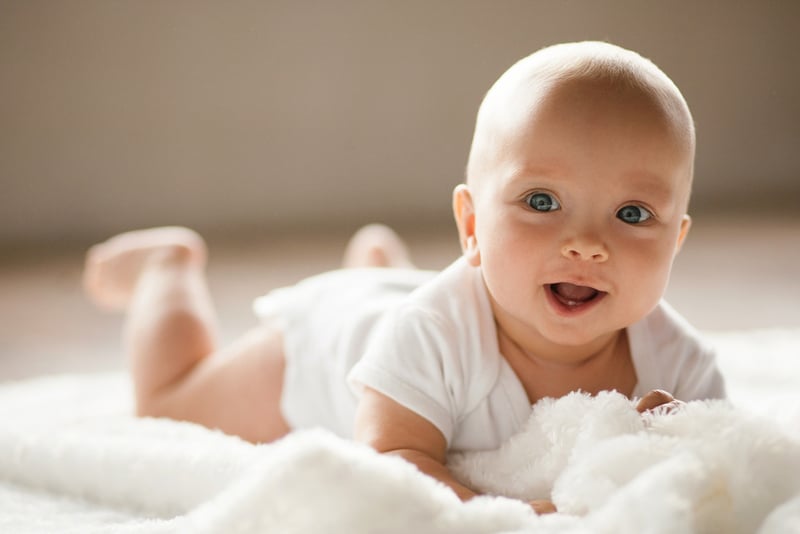 Some parents like to name their children in some way connected to their birth month.

Here are a few of the top trending names for October babies: 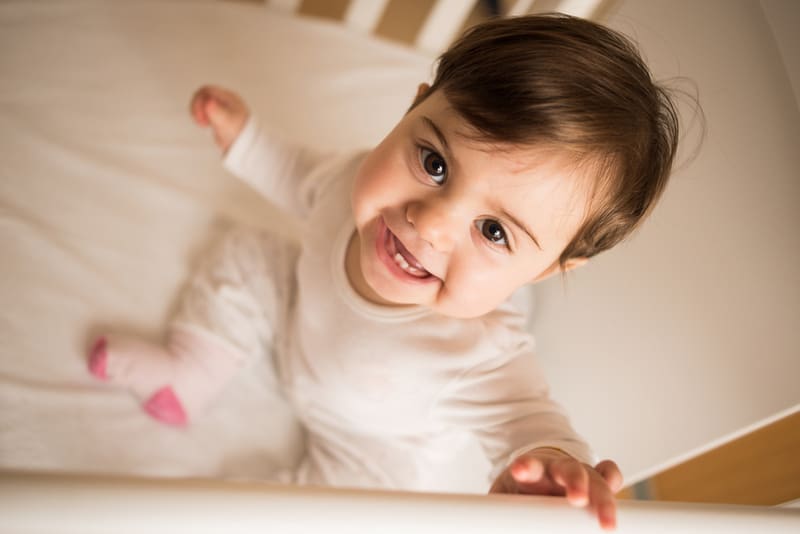 Were you surprised by any of these interesting facts about October babies?

Every child is a beautiful individual inside and out, and these fascinating facts are based on general data and theories, but of course, they’re not necessarily true for all October kids.

October-borns might have certain advantages over others in sports or politics, which doesn’t mean they’re the best at everything.

But, if your little one is an October child, you might want to prepare yourself to become the mother of the future American president.

Even if that doesn’t happen, I’m sure you’ll still be the proudest mama on Earth! 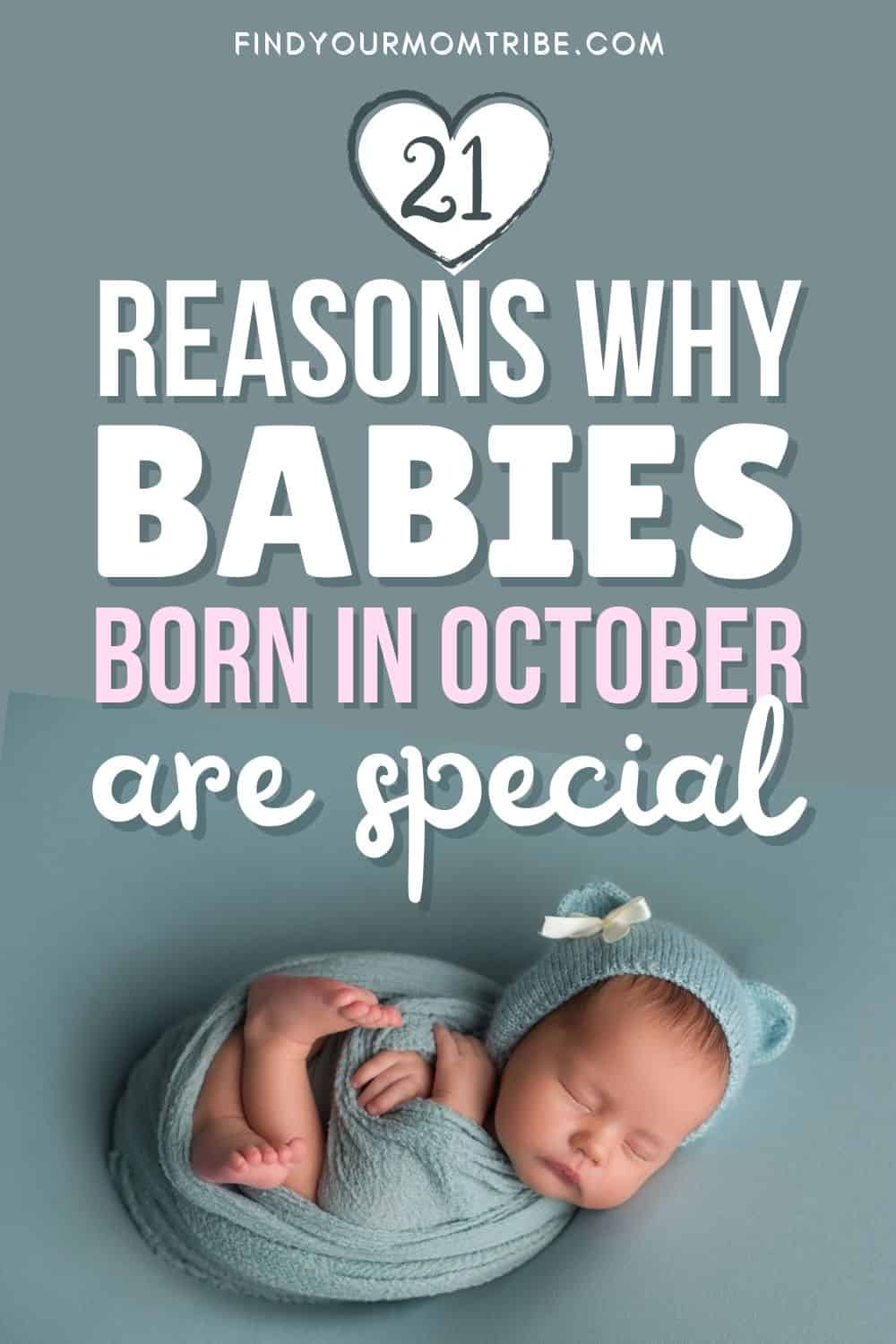