Nieces and nephews love their uncles and aunts as much as their parents, which is why they come up with adorable uncle and aunt names that melt the hearts of those two valuable family members!

There are plenty of adorable uncle nicknames that show appreciation in the sweetest way for everything uncles do for us in everyday life.

An uncle is best described as a father, brother, and friend, all in one person.

He may not show his emotions as openly as your aunt, but that doesn’t mean he loves you any less.

Of course, being an uncle is far less demanding than being a dad, but it does involve some responsibility.

Uncles aren’t there just for the fun times, they’re also the ones who know how to discipline your kiddo in a minute.

This is exactly why uncles deserve to know how much they’re appreciated and admired for all the love and support they give.

These nicknames will put a smile on his face, but will also reflect that special bond between him and his nieces and nephews!

What Makes An Uncle Special? 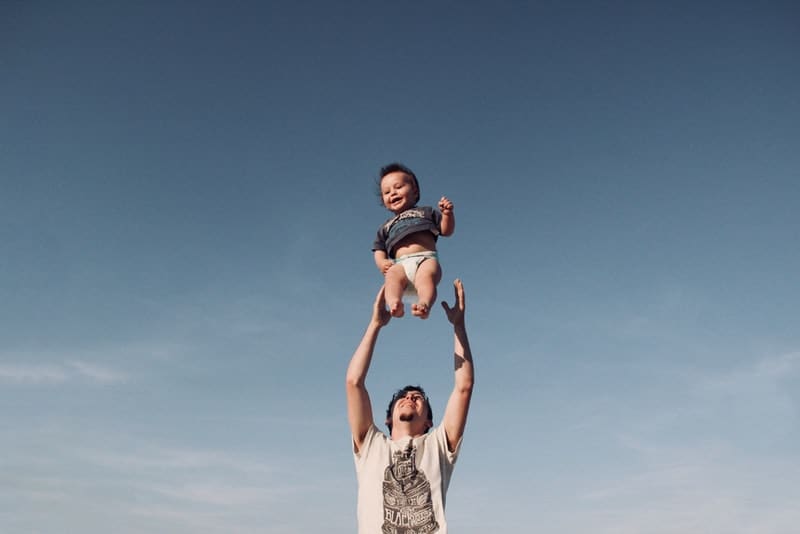 An uncle is a second father to a child, a family member who’ll always be there to protect you and keep your secrets safe from everyone else.

He might tease you and teach you some mischievous behaviors, but he’ll always be there to keep you safe even when your parents aren’t around.

Uncles deserve only the best, even when it comes to nicknames.

That’s why I’ve collected some of the best nicknames for uncles that they’ll surely love to see.

If you’re not sure whether your uncle can take a joke or not, you can use any of these safe uncle pet names to avoid calling him by his given name or by the formal title of uncle:

6. Uncle (followed by his name) 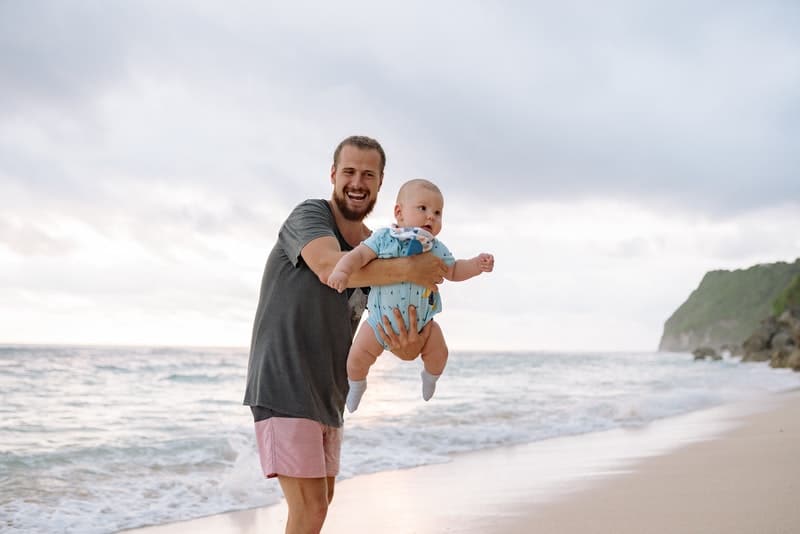 An uncle is an important part of a child’s life, he’s the one who’ll let you get away with things your mom and dad wouldn’t and the one who’ll cover for you in every situation.

While aunts generally behave like “second mothers”, uncles are frequently considered to be more like older brothers than “second fathers”.

Of course, that doesn’t mean that an uncle won’t be able to keep their niece or nephew safe in every situation.

He’s the one who’ll take you everywhere you want to go and the one who’ll make funny faces with you in family photos and let you call him whatever you want without getting mad.

So, if you’re looking for some fun nicknames for your uncle that’ll make both of you laugh hard, you should check out this list of silly nicknames for uncles:

2. Uncle Jingles (if he’s into music)

3. U.C. (use your uncle’s initials, for example, uncle Chris)

Most people would agree that aunts are usually in charge of sugar, spice, and everything nice, but that doesn’t mean uncles don’t have soft spots for cute things.

Aunts do tend to show their love a bit more than uncles do but trust me, your little one is still the apple of his eye!

These nicknames are a great way to express your feelings towards your uncle, or you may teach your kiddo to call your brother (or in-law) by one of these sweet pet names: 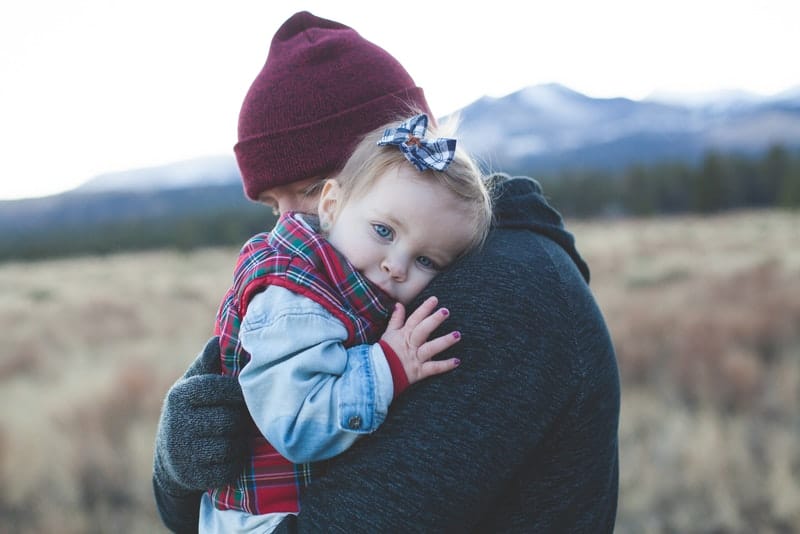 There are many names for uncles that come from different cultures and languages that can be used as unique nicknames for this special person in your life.

Some people might have a family background or history from another culture or country that they can honor by using the translation as a pet name for their uncle.

This is a nice way to pay respect to the country of your origin and to your uncle, who’ll surely appreciate this gesture.

However, you don’t have to have any connections with foreign countries in order to use one of the expressions listed below as cool uncle nicknames:

Uncle Names From A To Z 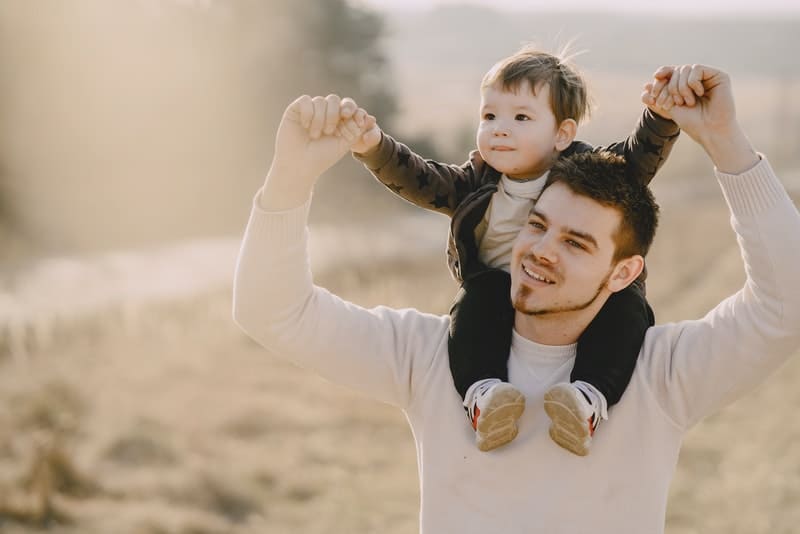 Nicknames can be based on several factors, including personality or an uncle’s given name.

Most kids use cute, funny, or cool nicknames for aunts and uncles when they’re little, but nephews and nieces generally opt for more common nicknames related to uncle’s and aunt’s given names when they grow up.

Sweet pet names always remain an adorable memory of the special bond between an uncle and his niece or nephew, but some people don’t find it appropriate to use those nicknames in adulthood, especially in public.

Therefore, if your uncle shares a name from this list, you’ll be able to find a perfect nickname for him in a split second:

How To Choose The Best Nickname For Uncle

Nicknames are generally considered to be short forms of longer names, but they’re also a term of endearment for people who mean a lot to us.

Nicknames tend to stick for the rest of your life, or at least a big part of it, which is why it’s important to choose something that both sides will love.

Finding the perfect name or a nickname can be a real challenge, but it’s not mission impossible, either.

Before you make the final decision about nicknaming your uncle or your brother (in-law), make sure to take a few things into consideration such as age and personality.

If an uncle is mature in age, he’ll probably appreciate a more traditional nickname over a sweet or silly pet name.

On the other hand, if he’s not much older than his niece or nephew, an uncle might enjoy a nickname that’s more creative than Bill or Bob.

An uncle’s personality traits are another important factor to consider when choosing a nickname for him.

If he’s a more old-school, traditional type of a person, it would be better to stick to more common pet names.

However, if he’s more liberal or a jokester, I’m sure he’ll love a more creative pet name (a funny one, of course).

The most important thing is not to push something just because you like it. If you notice that your uncle (or your brother) doesn’t really like the nickname, it would be better to find an alternative.

After all, he’s the one who’ll end up with this pet name so he might as well like it.

I hope you found at least one nickname for an uncle that seems appropriate for that special person in your life.

Some people consider nicknaming to be a trend that’ll soon fade away, but it’s so much more than that.

Pet names are an adorable way of expressing love and appreciation for the person you feel close to, a secret language that makes the bond between the two even more special.

Uncle nicknames are a part of the secret language between him and his niece or nephew.

It’s a symbol of a close relationship that’ll always be a special part of their lives.

Finding such a perfect nickname is challenging, but also one of the sweetest tasks for a niece or nephew.

However, there are a couple of things you should keep in mind such as the age and personality of the uncle you’re nicknaming.

If you’re not sure whether the other side will like the pet name you’ve thought of, it’s better to stick to the more traditional ones, or at least ask him before you use it in front of other people.

I must confess, I like every nickname on this list and I’m sure every uncle would be on cloud nine after being called such sweet nicknames (except maybe uncle Grumpy).

These nicknames can also be a great base for a really cool gift!

You can order a personalized T-shirt on shopping sites such as Amazon or Etsy, put a cute nickname on the front, and a sweet quote for an uncle on the back.

This type of gift is great for the announcement of a new baby in the family, uncle’s birthday, or any other special day in your family! 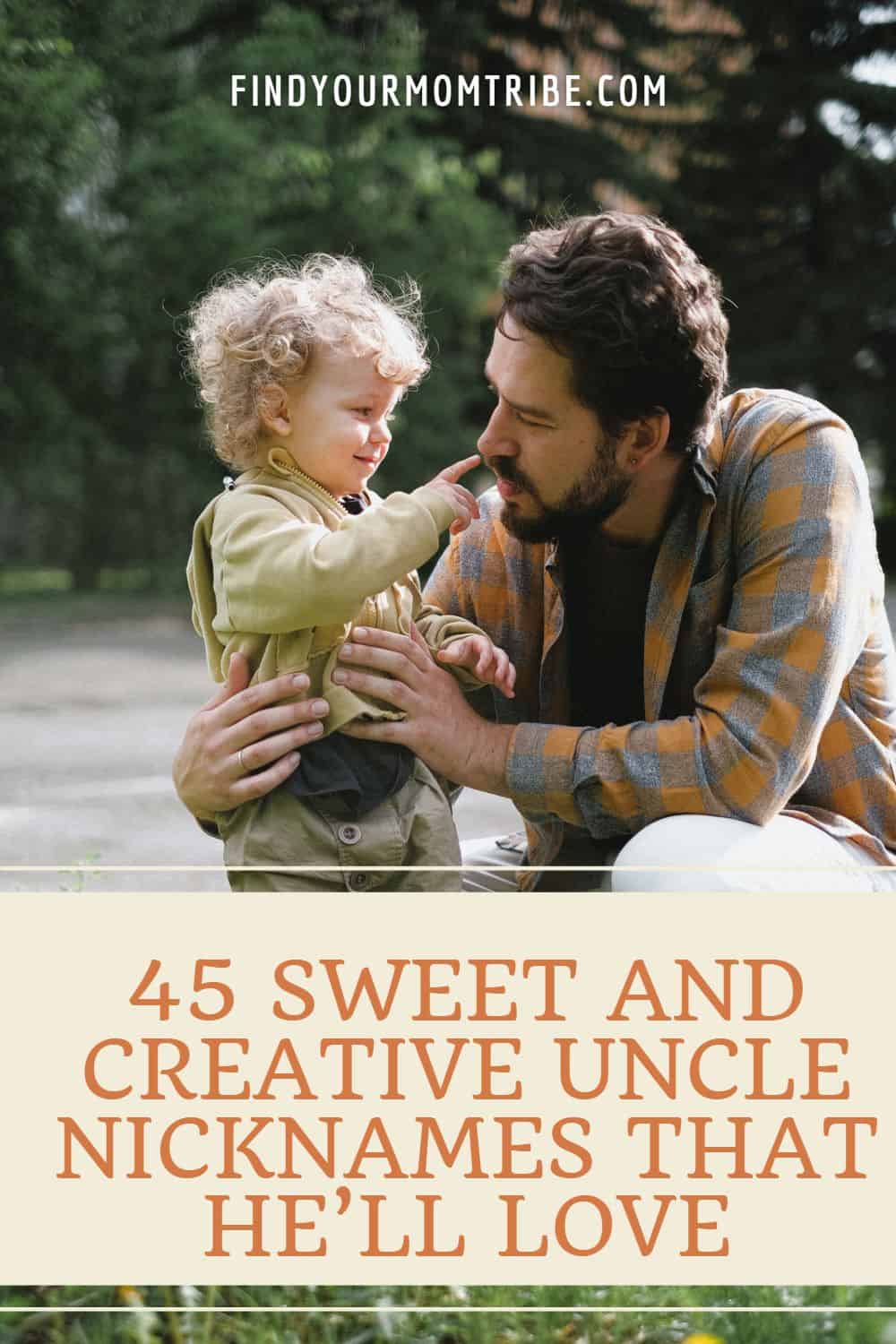